Described as 'The Jewel Town of the South Coast'

Port Elliot is a pleasant and quiet holiday destination which was originally planned as the major port for goods moving up and down the Murray River. Today it is a holiday resort town on the South Coast known for its cafes, beachside cottages, its coastal walks and its beautiful coastline. It is an attractive alternative to the busier centres of Goolwa and Victor Harbor.

In 1852 the town was surveyed and named after Sir Charles Elliot who was the Governor of Bermuda, Trinidad and St Helena at the time.

Walk Into History at Port Elliot
There is a useful, downloadable brochure and map titled Walk Into History at Port Elliot (see https://www.walkingsa.org.au/wp-content/uploads/2015/07/Walk-into-History-at-Port-Elliot-brochure-and-map.pdf) which lists a total of 30 places of historic interest around the town. They are divided into the Red Walk and the Blue Walk. The buildings include:

Southern Fleurieu Historical Museum
Located on the corner of Wright Street and Water Lane, the Southern Fleurieu Historical Museum is open from 10.00 am - 3.00 pm on Thursdays and Sundays. There is an excellent website. Check out http://sfhmuseum.net.au/homepage.html. It explains that the museum was created as a result of three exceptional collections which include "unique and unusual items" (a rare Australian water rat fur cape, a portable pedal organ, a charcoal burner); a fashion exhibition with fashions from 1788-1956; a series of cottage style family rooms with historic contents; an award winning dairy display; an impressive tractor collection; a number of ploughs and displays of historic tools of trade.

Freeman's Knob and Freeman Lookout
There is remarkable inconsistency when it comes to Freeman Knob (or is it). Is it Freemans Knob? Freeman's Knob? or Freeman's Nob as it is spelt on the obelisk? The obelisk and the Freeman Lookout are located at the end of The Strand and overlook Horseshoe Bay. The obelisk is made of limestone but was cement rendered in the 1930s and painted white. It replaced an original obelisk which was constructed in January, 1852 and was characterised by a blue flag which could be seen 15 nautical miles out to sea. It was a simple device for guiding ships into the harbour. Near the obelisk there is an impressive set of steps which were built in 1936 'In memory of our pioneers'. There are a set of stairs which run from the obelisk to a path which leads around the rocks to the south and beyond the obelisk is Freeman Lookout. There is a pleasant walk around the headland from the Flying Fish Restaurant to Rocky Bay and Green Bay.

Boomer Beach
Located along the coast to the west of Freeman Lookout is Boomer Beach which has been named because of the huge, often dumping, waves which caused problems for the early sailing ships and are now favoured by body boarders. Boomer Beach, when the waves are running, is one of the best locations on the coast. It is also known as a good place for whale watching. Check out https://beachsafe.org.au/beach/sa/alexandrina/port-elliot/boomer for more details.

The Cockle Train
The Cockle Train runs during the school holidays and every Saturday, Sunday and Wednesday for the rest of the year. It runs three times a day from Goolwa to Victor Harbor stopping at Port Elliot. Nicknamed by the locals because they used to use it to travel to Goolwa to collect cockles, it is a pleasant journey from Victor Harbor to Goolwa and back.
The very detailed website explains: "The Cockle Train is based at our Goolwa Depot and commences its run each day at Goolwa station, in the historic Wharf Precinct alongside the River Murray. After crossing the main Goolwa to Victor Harbor Road the line heads off across the plains to Middleton, picking up or dropping off passengers on request, and then to Port Elliot where it reaches the Encounter Bay coast. The station here is operated by the local National Trust and features a small historical museum.
"After leaving Port Elliot the train climbs to the top of the coastal cliffs and passengers then experience some of the most picturesque coastal scenery on the Fleurieu Peninsula, with nothing separating you from the beach below and a perfect view of the Southern Ocean - in winter the home of Southern Right Whale. After a 30 minute journey the train edges into Victor Harbor station, right in the centre of the town and surrounded with its iconic pine trees. Here, the locomotive is detached from the carriages and turned on our specially retained 30m long electric turntable before rejoining the carriages for the return journey to Goolwa."
For the timetable and ticket prices check out https://www.steamrangerheritagerailway.org/our-trains/cockle-train. There are no reserved seats. You can book online or at the Goolwa, Victor Harbor and Port Elliot railway stations.

The Southern Encounter
The SteamRanger Heritage Railway operates a number of services (check out http://www.steamrangerheritagerailway.org/our-trains/the-southern-encounter) from Mount Barker to Goolwa and on to Victor Harbor. The most popular is the Southern Encounter. The SteamRanger website explains: "The Southern Encounter operates on the first and third Sundays from June until the end of November. The journey … leaves Mt Barker mid-morning, climbs up to the crest of the line and then winds down the eastern escarpment of the southern Mt Lofty Ranges, crosses the Angas River, then enters the historic township of Strathalbyn and continues southwards across the plains and across the Currency Creek viaduct and on to Goolwa. At Goolwa, the train draws alongside the river wharf and passengers alighting here have over four hours to explore local attractions, have lunch on the riverside, visit the Steam Exchange Brewery in the old goods shed, or take a short river cruise. Beyond Goolwa the train then meanders westwards to Port Elliot before cresting the cliffs where passengers can experience some of the most picturesque coastal scenery in the state, then onto Victor Harbor for a three hour stopover."

Urimbirra Wildlife Park
Located at 10 Welch Road, Hindmarsh Valley, about 6 km west of Port Elliot, the Urimbirra Wildlife Park is home to more than 70 species of Australian animals and birds. It is activity based and invites visitors to "Pet a kangaroo, pat a koala, feed an emu and watch a professional snake handler!" It is open daily 10 am - 5 pm. Check out https://www.urimbirra.com.au or tel: (08) 8554 6554 for more details.

* Prior to European settlement the area was home to the Ngarrindjeri Aboriginal people.

* By 1829 Captain Charles Sturt had explored down the Murray River and it was agreed that a settlement should be established near the mouth of the river so that the inland could be opened up.

* In 1838 Sturt endorsed Light's view that the mouth of the Murray could not be made safe for navigation.

* Eventually a decision was made that Goolwa would become the last point for shipping on the Murray River and there was a debate as to whether Victor Harbor or Port Elliot would be the ocean port. It was eventually decided that Port Elliot was the best location.

* Port Elliot was officially declared a port in 1851. That year the first ship arrived.

* In 1851 a railway between Port Elliot and Goolwa was built at a cost of £20,000. It ended up costing £31,000 and wasn't completed until 1854. It was the first railway in Australia. It was operated by draught horses pulling the carriages along the line.

* After a decade, the major port activities were moved to Victor Harbor.

* By 1853 the town had the first reticulated water system in South Australia.

* The District Council of Port Elliot and Goolwa was proclaimed in 1856.

* In the 1860s seven ships were wrecked trying to navigate through the difficult rocky outcrops off the coast and it was decided to extend the railway to Victor Harbor which became the major port on the south coast.

* By the early 1870s there were a number of guest houses and hotels in the town and it was catering for tourists.

There is a basic local page at https://fleurieupeninsula.com.au/port-elliot and https://southaustralia.com/places-to-go/fleurieu-peninsula/destinations/port-elliot offers useful information about accommodation in the area. 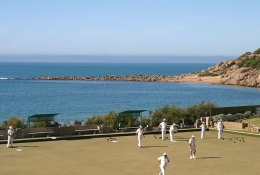 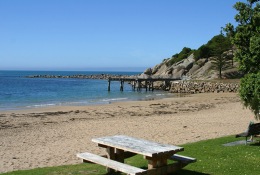 The Jetty on Horseshoe Bay 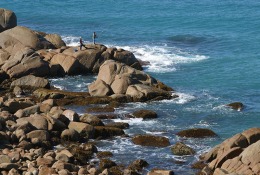 Fishing off the rocks below Freeman Lookout 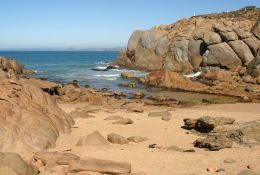 The rocky shoreline at Green Bay 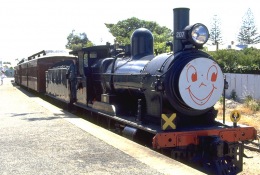