Today the ruins of Victoria Settlement, sometimes known as Port Essington or just simply Victoria, are part of the Garig Gunak Barlu National Park on the Cobourg Peninsula. The importance of the settlement is that it was the third attempt by the British to settle the northern coast of Australia. The aim was to lay claim to the land and to ensure that other ambitious imperial countries - particularly France - did not establish a settlement in the area. By the time Victoria was established, two previous settlements had already been abandoned, Fort Dundas on Melville Island and Fort Wellington at nearby Raffles Bay. Today the ruins, remarkably well preserved but nothing more than ruins, can be inspected by joining a group tour. The area is part of the Garig Gunak Barlu National Park. Permits are needed to enter and it is jointly controlled by the Garig Gunak Barlu National Park and the Northern Territory Parks and Wildlife Commission.
Visiting the Garig Gunak Barlu National Park by car or boat is a major commitment. The drive from Darwin is 570 km, most of which is over a difficult unsealed road. The best option is to book into Seven Spirit Bay Lodge and take a tour to Victoria Settlement. There are also small cruises which leave from Black Point Ranger Station.

The ruins of Victoria Settlement on Port Essington are located on the Cobourg Peninsula some 300 kilometres north of Darwin. It can be reached by plane and boat or by  4WD across a 570 km road from Darwin via Kakadu National Park).

Visiting Victoria Settlement
The Garig Gunak Barlu National Park and the Northern Territory Parks and Wildlife Commission have created excellent signage at the site. It is remarkably easy to follow (a photo of the sign is attached) the route around the ruins. The sign reads:

Ngardigawunyanggi
Victoria Settlement
Victoria Settlement was established in 1838 on the traditional lands of the Madjunbalmi clan of the Ngardigawunyanggi. It was a brave but futile attempt by the British Government to establish a small, isolated defence post on Australia's northern coast. Most of the ruins you can see here are the remains of the settlement.
By the time Victoria Settlement was established, two previous settlements had already been abandoned, Fort Dundas on Melville Island and Fort Wellington at nearby Raffles Bay.
Victoria Settlement brought major disruptions to the lives of local Aboriginal people and those posted here. There were benefits such as trade and friendship, but cultural misunderstandings and the introduction of new diseases also occurred.
Macassan fishermen who sailed from Sulawesi (Indonesia), benefited from increased trade.
Abandoned after 11 Years
Victoria Settlement was abandoned by the British in 1849. They gave their unwanted dogs, horses, cattle and spoiled tobacco to the local Aboriginal people in thanks for the help given during the decade of settlement.
The abandoned settlement was used at times by pearlers, pastoralists, salt gatherers, buffalo shooters and timber cutters. Macassan fishermen continued to visit the area regularly until they were banned from Australia in 1906.
In 1981 Cobourg Peninsula and this Heritage Place became part of Garig Gunak Barlu National Park. Madjunbalmi descendants and other traditional Aboriginal owners play an important role in the area's joint management.

Please Remember
* Victoria Settlement is a declared Heritage Place and is protected under the Heritage Conservation Act, 1991.
* All cultural items and wildlife are protected

There is a map on the sign which identifies 15 places of interest on the 3.7 km walk around the ruins.
1. Later Ruins - John Lewis came overland from Pine Creek in the early 1870s aiming to provide buffalo meat to Darwin. A few flagging stones are all that remain of his cottages.
2. Aboriginal Midden - Containing the remains of past meals. It can be identified by shell fragments and a dense vegetation cover.
3. Magazine
4. Government House - One of Australia's earliest elevated dwellings. Originally placed on stone piers to avoid levelling the ground, the building was cooler and more resistant to termites.
5. Married Quarters
6. Smithy
7. Jetty - In 1938 a cyclone destroyed the jetty and damaged many buildings.
8. Saw pit, Kiln and Well
9. Hospital - At times the hospital was crowded with over half the garrison desperately ill.
10. Aboriginal Midden
11. Quartermaster's store
12. Lime kiln
13. Cemetery - Malaria took the lives of almost a quarter of the residents.
14. Garden
15. Kiln

How to Get There
Check out these sites. They all offer tours:
(a) Seven Spirit Bay - accommodation and tour - https://sevenspiritbay.com.au.
(b) Outback Spirit - https://www.outbackspirittours.com.au/tours/arnhem-land-wilderness-adventure.
(c) Venture North - departing from Black Point - https://venturenorth.com.au/more-information/blackpoint.

Cobourg Peninsula and Garig Gunak Barlu National Park
There are tours from Darwin to the area but for those who wish to travel to the area by car or boat a permit is required. It can be obtained from Black Point Ranger Station, NT. Tel: (08) 8979 0244. The only accommodation available in the Garig Gunak Barlu National Park are cabins near the Ranger Station at Black Point and they should be pre-booked when applying for entry to the Park.

* The original and continuing inhabitants of the area are the Madjunbalmi clan of the Ngardigawunyanggi First Nation people.

* The first European known to have explored the area was Peter Pieterzoon who sailed around the Cobourg Peninsula in 1636.

* Matthew Flinders sailed around the coast in 1803.

*In 1824 Captain J. J. Gordon Bremer reached Port Essington and found that there was no fresh water and so, after three days, moved to Melville Island where the settlement at Fort Dundas was established.

* The settlement at Fort Dundas lasted until 1828 when a combination of scurvy, tropical diseases, lack of fresh supplies, and antagonistic locals forced it to be abandoned.

*In 1828 a second attempt at a settlement was made by Captain James Stirling at Raffles Bay. The settlement closed down after two years.

*It was a military outpost and for the next eleven years was manned almost exclusively by Royal Marines. The population never exceeded 78 and the conditions were harsh.

*In June 1839 Bremer was posted to China to be part of the British forces during the Canton uprising.

* The settlement was virtually wiped out by a cyclone in November, 1839.

* In 1844 a group of convicts including trained masons and quarry men were stationed briefly at Port Essington. The skills of these tradesmen resulted in a beacon and a sophisticated hospital being built.

* Leichhardt returned to Sydney in March 1846 and was hailed a hero.

* Thomas Huxley passed through the settlement in 1849 and left a graphic description of the sheer awfulness of Port Essington describing it as 'the most wretched, the climate the most unhealthy, the human beings the most uncomfortable and houses in a condition most decayed and rotten.'

* In 1906 Macassan fishermen were banned from using the site.

* In 1966 Dr. F. J. Allen carried out archaeological research at the settlement. He found that in the first 12 months the settlement, which had comprised of a hospital, officers quarters and 24 cottages had been a mixture of prefabricated buildings brought from Sydney and cottages built from local materials but lacking any real skill as the builders had lacked the necessary trade skills. 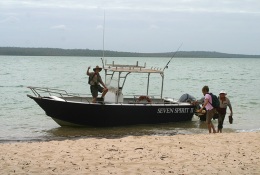 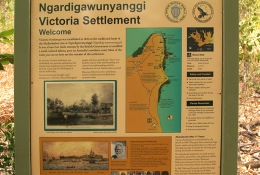 The sign at the beginning of the Victoria Settlement walk 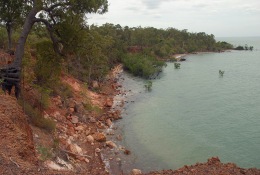 The coastline at Victoria near where the jetty used to be 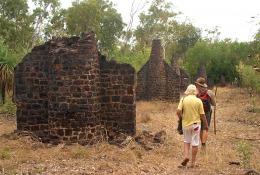 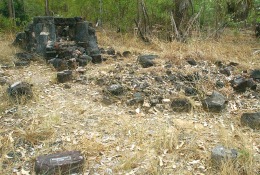 The blacksmith’s forge at Victoria Settlement 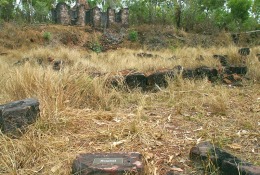 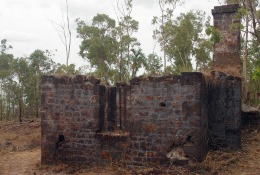 Ruins of the Hospital Kitchen 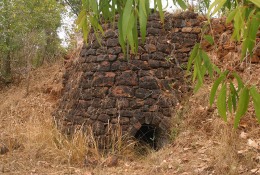 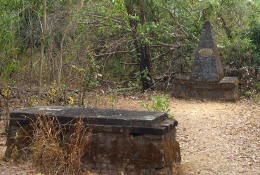 The cemetery at Victoria Settlement 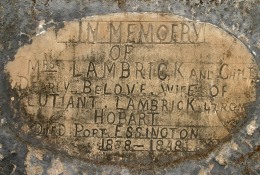 The handwritten gravestone of Mrs Lambrick and Child in the cemetery 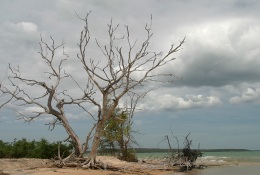 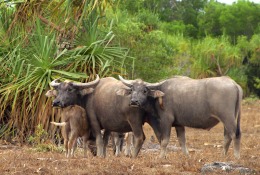 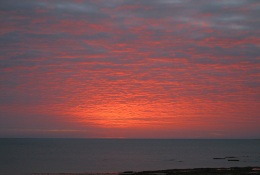