Sleepy Spencer Gulf port with the longest jetty in Australia

Port Germein is a quiet, peaceful and popular holiday destination. Located near the top of the Spencer Gulf it is an ideal place to relax by the sea and take in the holiday ambience of a port which was once famous for the fact that it boasted the longest jetty in the Southern Hemisphere. The water was so low that a jetty which was 1676 metres long was built to cater for the ships which came to the port to collect the wheat harvest. It is an attractive holiday town which is nestled below the southern Flinders Ranges. It has a large number of child-friendly parks and activities and is famous for its blue swimmer crabs. It is ideal for those wanting to access to the lower Flinders Ranges.

No one is sure which member of the Germein family gave his name to the port. One theory argues that Captain John Germein discovered the inlet during his explorations of the coast in 1840 while another theory claims that it was John's brother, Samuel Germein, who discovered the inlet while taking stores to Edward Eyre at the head of Spencer Gulf in 1840.

The Anchor and Plough
In the median strip in the High Street there is an anchor and a plough with the inscription "1878-1978 Dedicated to the seafarers and pioneers of Port Germein and District. Unveiled by John T. Germein, Esq. a descendant of Captain John Germein on 7 October 1978."

Pier Hotel (now a Cafe)
This two storey building on the waterfront (one of the few major buildings in town) was built in 1881. It was once named the Pier Hotel and it was where sailors, local farmers and wharfies used to meet. It is claimed that one seaman was murdered in the pub during a brawl. It became a general store in the 1970s and it has been restored to its original hotel appearance and is a restaurant/cafe. Near the building is a monument which provides an image of the clippers which used to carry grain from Port Germein around 1920.

Port Germein Jetty
At 1676 metres (more than a mile in non-metric language) the Port Germein jetty was the longest jetty in South Australia and, reputedly, the longest in the southern hemisphere. It was officially opened in 1881 (with an extension added in 1883) to service the grain sailing ships which were loaded at the port. The aim of the jetty was to provide a safe point where grain from the wheatbelt of South Australia could be directly loaded onto ocean going vessels for export to Europe. This was always problematic. Soon after it was built it was necessary to dredge beside the jetty because the water was too shallow. Then, as the clipper ships got larger, they had to moor another 800 metres offshore and be loaded with wheat which was transferred first to lighters and then to the ships. It is claimed that at its peak Port Germein was the largest grain loading port in Australia. It experienced a number of damaging storms (notably in 2016) and over the years and it has now been reduced to about 1500 metres. It is still a healthy walk being 3 km return. It is also a reminder of the complexity of loading wheat onto ships when the shoreline was so shallow.

Mount Remarkable National Park
Located 27 km north-east of Port Germein via Baroota, Mount Remarkable National Park is an area of impressive scenery covering 8649 ha of the southern Flinders Ranges. There are three walks from Mambray Creek Campground:
1. Sugar Gum Lookout Trail
This is a 4 km trail (allow 3 hours for the walk) which departs from Mambray Creek picnic grounds and continues along a deep valley where red river gums grow. There is a short climb to the lookout which offers panomaric views of Mount Cavern and the red quartzite cliffs of Alligator Creek.
2. Mount Cavern Trail
This 11 km, 6 hour walk crosses the Black Ridge and reaches the summit of Mount Cavern before descending into Mambray Creek. The walk is through stands of red gums and sugar gums. Wildflowers are common in the spring and rosellas, corellas and kookaburras are common.
3. Hidden Gorge and Battery Ridge Trail
This is 15 km circuit which takes about 7 hours. At Hidden Gorge there are stands of native pine trees. Marvel at the red quartzite walls.

Telowie Gorge Conservation Park
Located 10 km east of Port Germein, Telowie Gorge is an attractive park at the southern end of the Flinders Ranges which has a community of yellow-footed rock wallabies living in an environment of Yellow Gum, Sugar Gum and Red River Gum. There is an excellent and detailed brochure which can be downloaded from https://www.parks.sa.gov.au/find-a-park/Browse_by_region/flinders-ranges-outback/telowie-gorge-conservation-park.

Bangor Historic Site - Not Even A Ghost Town
On the 30 km road to the east from Port Germein to Murray Town is the Bangor Historic Site. It is an interesting remnant of a small town. There is a plaque which records that: "The Bangor Historic Site. The Mount Remarkable Special Survey was purchased in 1846 to acquire mineral rights to a discovery of a copper ore near Mount Remarkable. When the special survey was subdivided in 1853 the township of Bangor was surveyed at the southern end but it never developed. A road through the Port Germein Gorge opened in 1879 to allow grain to be carted from the eastern side of the ranges to Port Germein. The Gorge Hotel was erected by Thomas Kurner in 1888 as a stopping point for carters. This subsequently became known as Bangor. Up to 100 bullock and horse teams were camped at any one time at the creek opposite the hotel. The hotel closed in 1911 when the extension to railway greatly reduced the traffic through the gorge. Several other buildings were erected near the hotel, including a school, post office, shop and blacksmith. All have been demolished. A school opened in 1887 in a building which later became the hotel stables. The school was relocated in 1905 and a building transported from Port Germein School; it closed in 1964. The Post office opened in 1887 and closed in 1931." All that remains are the ruins of the hotel and a plaque which was put up in 1986 which has an image of the hotel. For more detail check out https://www.southaustralianhistory.com.au/bangor.htm.

Wirrabara
Located 37 km east of Port Germein via the Port Germein Gorge, Wirrabara was originally settled by Europeans in 1844. It is claimed that 'wirrabara' is a Nukunu word meaning "creek with big trees" although other sources claim it means "running water, rushing winds". It is an attractive area which is known for its State pine forests (and its timber mill) as well as its peach orchards. In the main street is an old steam engine which was used to cut timber in the pine forest.

* The first European into the area was Captain Matthew Flinders in 1802 during his circumnavigation of Australia.

* In 1839 the explorer, Edward John Eyre, passed through the area.

* In 1840 Captain John Germein discovered the inlet during his explorations of the Spencer Gulf. Around the same time John's brother, Samuel Germein, sailed up Spencer Gulf taking stores to the explorer Edward Eyre.

* The township was formally gazetted in 1878. The Pier Hotel was built that year.

* In 1879 the track through Port Germein Gorge was opened. Postal facilities were opened in the port and the Police Station was opened.

* The development of the district as an important producer of wheat led to the building of the jetty in 1881 by John Wishart. The jetty was opened on 17 July.

* The Port Germein Hotel and the local school both date from 1881.

* The jetty was extended to 1676 metres in 1883. The Port Lowly lighthouse was built that year.

* In 1885 a number of blocks of land in the town were sold with front blocks averaging £3/15/- a foot. A large general store was built that year.

* The town's Church of England was consecrated in 1885.

* In 1888 the first Port Germein District Council held a meeting in Melrose.

* The town experienced a serious flood in 1910.

* The railway between Port Pirie and Port Augusta was completed.

* The port continued to operate until the 1940s.

* The town was connected to electricity in 1959.

* On 23 January, 1991 the town was hit by a cyclone. The town was without electricity for a week.

* The jetty was repaired and opened again in 2018.

* In 1982 the New Years Eve celebrations in the town included the Festival of the Crab, a celebration of the local blue crabs.

There is no Visitor Information in Port Germein. The closest is the Port Pirie Regional Tourism and Arts Centre, 3 Mary Elie Street, Port Pirie, tel: 1800 000 424.

There is a dedicated local website. Check out http://www.portgermein.com.au. 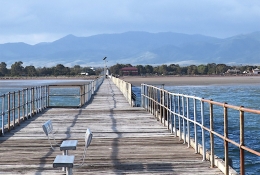 The jetty at Port Germein 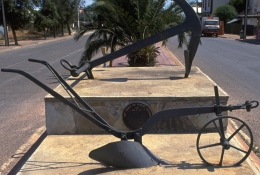 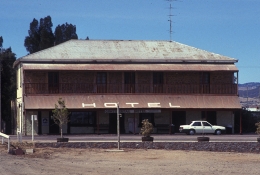 The Pier Hotel, in recent times a cafe on the beachfront 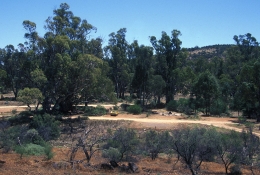