Port Neill is a small coastal holiday town located on Spencer Gulf in an area known for its incredibly white sands and aquamarine seas. Historically a grain port, today the town is a small, out of the way, place far removed from the pressures of more modern communities. The quiet beauty of the town and its easy laziness make it ideal for fishing from the jetty, swimming in the quiet waters and walking along the beaches.

Originally known as Carrow (reputedly a Nawu word for the local water soaks) when it was gazetted in 1903, the town was renamed Port Neill on 19 September 1940 to honour the Warden of the Marine Board, Andrew Sinclair Neill.

Port Neill Hotel
One of the town's most prominent buildings is the old Port Neill Hotel (a rather ordinary hotel) which was built in 1911 but, because the settlement was so small, was not granted a licence until 1912. The owner, a Mr Habib, paid people to live in tents and humpies to increase the population so that the size of the town could justify the granting of a liquor licence.

Historic Anchor of Lady Kinnaird
On 19 January 1880 the Lady Kinnaird left Port Pirie for England with a cargo of 8,400 bags of wheat (35,568 bushels). That night, just after midnight on 20 January, it struck bad weather and sank off Cape Burr near Port Neill. A local shepherd found the crew who had all managed to reach the shore. Nearly 100 years later the Society for Underwater Research in Adelaide located the wreck and the anchor was raised and brought to Port Neill where, after months of treatment against rust, it was mounted on a cement block. It was unveiled in 1980 and can be seen near the jetty. "The timbers from the ship were salvaged and used to support a large galvanised roof from which rain was collected into tanks for the use of travelling stock and wayfarers. These tanks were known as the Lady Kinnaird tanks and were situated a few miles north of Port Neill."

Port Neill Jetty
Work began on the Port Neill jetty in 1911 and was completed in May 1912. The cost was approximately £7,000 and at the time a cargo shed, stacking area, rail tracks, super shed and wheat shed cost an additional £2,200. Like all the jetties around the coast of the Eyre Peninsula it was constructed primarily to ship wheat and receive goods needed locally. As the district's agriculture expanded it began to handle wool and barley. The jetty was extensively repaired in 1962 and again in 1968.

Eyre Memorial
Located 10 km west of Port Neill (ask at the Caravan Park for directions) a plaque has been erected on The Bluff where the explorer, Edward John Eyre, spent the night.

* Prior to the arrival of Europeans the area was occupied by the Nawu First Nation people.

* The first European to explore the coast was Matthew Flinders who reported on 7 March, 1802 that he had passed country characterised by "low front land, somewhat sandy, with raised land inland and of a barren appearance, its elevation diminishing to the northward."

* In 1840 the explorer Edward John Eyre passed through the area.

* In the 1840s Governor Gawler sailed up the coast of Spencer Gulf. He mentioned Mottled Cove, the large open bay upon which Port Neill is located.

* The area around Port Neill was first settled in 1873 when the pastoralist John Tennant and his son Andrew took up land around the bay. At the time the whole area was known as Mottled Cove.

* On 20 January 1880 the Lady Kinnaird left Port Pirie for England with a cargo of 8400 bags of wheat. That night it struck bad weather and sank off Cape Burr near Port Neill. A local shepherd found the crew who had all managed to reach the shore.

* On 19 September 1940 the town was renamed Port Neill thonouring a Warden of the Marine Board, Andrew Sinclair Neill.

* Grain silos and bulk handling facilities were established at the port in 1970. Grain is now trucked to the Port Lincoln grain terminal.

* The anchor of the Lady Kinnaird was raised and brought to Port Neill where, after months of treatment against rust, it was mounted on a cement block. It was unveiled in 1980, exactly 100 years after being sunk.

There is an official website - https://www.eyrepeninsula.com/port-neill - which has useful information about the town. 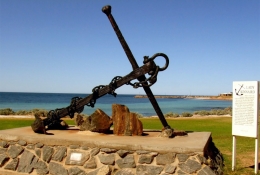 The anchor of the Lady Kinnaird on the shore at Port Neil. 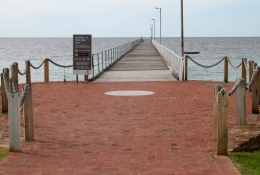 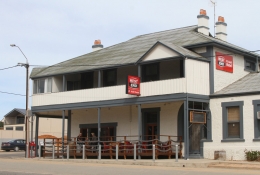 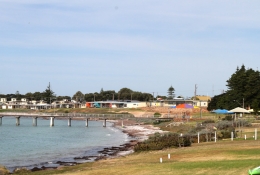 The view along the foreshore at Port Neill. 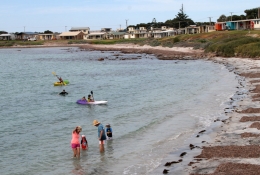 The main beach at Port Neill. 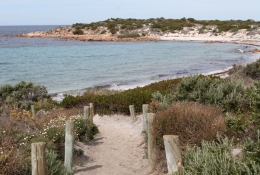 The path down to Back Beach behind the town. 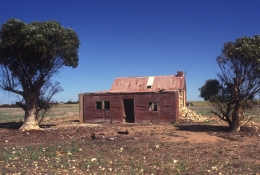 Typical of the Eyre Peninsula - a ruined house on marginal, desert land.