Port Noarlunga and Hallett Cove are now attractive seaside suburbs at the southern edge of Greater Adelaide. They were a vital part of the early European development of South Australia but, in the past two decades, this sleepy retreat has become a popular suburban development with large houses gazing over St Vincent Gulf. Still, the attractive historic churches in Old Noarlunga and Port Noarlunga, the peaceful beaches, the jetty and the 1600 metre reef, make it an ideal daytripper and family holiday destination. Old Noarlunga, which lies 5 km south east of the port, has a beautiful park between the main road and the Onkaparinga River. It also has a number of interesting historic buildings.

It is widely accepted that Noarlunga derives from the corruption of an Aboriginal word (probably a Kaurna word) "Nurlongga" meaning a curved place and probably referring to the bend in the Onkaparinga River known as the Horseshoe Bend.

Collett Barker Memorial
Located on The Esplanade above the jetty, the Collett Barker memorial, an impressive 4 metre high bluestone cairn which was installed in 1933, records the approximate landing place of the explorer and military officer, Captain Collett Barker who reached the area on 15 April, 1831. The inscription reads: 'Hereabouts April 15, 1831 Captain Collett Barker, Pioneer Explorer, landed from the ship Isabella and proceeded inland and lost his life April 30, 1831.' For more information check out http://monumentaustralia.org.au/themes/people/discovery/display/51533-collett-barker.

There are a number of Heritage Sites and places of interest along the beachfront at Port Noarlunga. They include:

Anchor of the David Witton
Located on the park outside the Port Noalunga Surf Lifesaving Club, the Anchor of the David Witton. The bronze plaque explains "This bower anchor, raised from the sea by the Underwater Explorers Club in November, 1969, is believed to be the from the Brig 'David Witton', which ran aground near Witton Bluff during a severe gale on the night of the 14 March, 1839." After being beached it was sold at auction, rebuilt and renamed Onkaparinka and operated between Port Adelaide and Noarlunga for many years.

Core Values Totem Poles
Located near the Port Noalunga jetty, the Core Values Totem Poles were installed in April, 2013 and created by artist Terry Beaston. The signage explains: "The Core Values Totem Poles celebrate the beautiful landscape of Port Noarlunga and create a unique sense of place. They reference the local environment by incorporating layers of coloured glass and ceramic sedimentary strata reminiscent of the surrounding cliffs that dramatically change throughout the day and glow with the setting sun. The sculptures consist of pre-cast cement and include cast and fused glass pieces, clay, polished stones, terrazzo and carved efffects, cement oxide colours and stains."

Perry Homestead
Located at 80 Murray Road, this home was built in 1922 "the building is two storeys and set on the side of a hill with surrounding balconies. Constructed of stone with brick trimmings and an iron roof, the building has been owned and occupied by the Perry family since construction." For further information check out http://www.onkaparingacity.com/builtheritage/heritage_details.asp?ID=50.

Port Noarlunga Hotel
Located at 29 Saltfleet Street, the Port Noarlunga Hotel was built in 1932 and by 1947 it boasted the first beer garden in South Australia which was, sadly, removed in 1996. The Onkaparinga Built Heritage website records "A large two storey corner hotel building with a projecting, angled, corner flying gable and verandah/balcony to two sides. Walls are constructed of red brick, rendered to the base. The low pitched, hipped and gabled roof is clad in terracotta tiles and the balcony roof is an extension of the main roof. Doors and windows are timber and windows are double hung sash windows.  The balcony posts and balustrade is timber." Check http://www.onkaparingacity.com/builtheritage/heritage_details.asp?ID=238 for more details.

Sauerbier House
Located at 21 Wearing Street and now converted into the Sauerbier House Arts Centre, the gallery and washhouse are open Wednesday to Friday 10.00 am - 4.00 pm and Saturday noon - 4.00 pm. For more information tel: (08) 8186 1393 or check out http://onkaparingacity.com/onka/discover/arts_culture/sauerbier_house_culture_exchange.jsp.
According to an article in The Adelaide Review in 2015 the building itself is "a good example of a late Victorian limestone house enclosed by a bull nosed veranda. Original outbuildings have been preserved, with the laundry/washroom now converted into a Writer’s Studio. The interior reflects the original no-nonsense taste of the original owners: white painted plaster walls and a suspended Baltic pine floor ... the land on which the house sits runs down to the estuary and links the site with the river and dunes. In terms of visual dramatics and cultural, particularly Indigenous connections, this siting is extraordinary."

Port Noarlunga Jetty
Noarlunga's most identifiable public building is the jetty which was opened in 1921. The town had a jetty as early as 1854 but, by 1900, it had fallen into disrepair and, although there was some interest in repairing it, it wasn't until 1918 that tenders were called for a new jetty. The result, costing around £6,000 was a timber jetty which was 1,250 feet long. It is protected by the reef which operates as a natural breakwater. In November 2018, the stairs at the reef end of the jetty were dislodged by strong winds and waves during a storm. The piles from the 1854 jetty lie 30 metres to the south of the existing jetty and can be seen on rare occasions.

Old Noarlunga
Located 5 km south east of Port Noarlunga via River Road, Old Noarlunga is a reminder of the historic origins of the European settlement in the area.

SS Phillip and James Anglican Church
Located at 30 Church Hill Road, Old Noarlunga, SS Phillip and James Anglican Church stands on the hill above Old Noarlunga. It dates from 1850 when the foundation stone was laid by Bishop Short. At the time Old Noarlunga had a flour mill, a regular cattle market and was important for the trade along the Onkaparinka River to and from Port Noarlunga. The Western Fleurieu Anglicans website explains: "The church, with its nave and 56-foot-high tower, was a very substantial structure to have been contemplated at that time and demonstrates the spirit and strength of faith of those early Anglicans. Stone for the church was quarried from the riverbank below, brought up the very steep hill by bullock carts and then by a winch anchored to a rocky outcrop in the church yard. This can still be seen, marked by a plaque, among the gravestones to the south of the church tower. The building was dedicated and ready for use in May 1852. The earliest grave in the adjacent cemetery is dated 1852. In 1863 improvements and extensions were made to allow for a sanctuary, chancel and vestry, and the earthen floor was covered in slate flagging. The windows, formerly covered in hessian, were glazed with lead-lights and the roof was re-slated. In the early 1900s, further restoration took place. This included wooden flooring and, in 1915, the installation of the beautiful east window.  Several renovations/restorations have occurred over subsequent years, including the replacing of the slate-tiled roof with corrugated iron. In 2003, a Cemetery Curator’s storeroom and bathroom were built at the eastern end." For more details check https://southernvalesparish.org/st-philip-st-james-old-noarlunga.

Princess Diana Fountain
Located in the Market Square Reserve park, off Patapinda Road in Old Noalunga, is an unusual fountain dedicated to Princess Diana, one-time wife of Prince Charles. The dedication reads "Dedicated to the Memory of Diana, Princess of Wales, "The People's Princess" 1961-1997 Erected through the generosity of the people of the City of Onkaparinga and unveiled by His Excellency Sir Eric Neal" on 31 August 1998.

Port Noarlunga Reef
Lying about 400 metres offshore, and very evident from the shoreline, is the Port Noarlunga Reef. It is about 1.6 kilometres long and was formed from a consolidated Pleistocene sand dune. It is a popular scuba diving and snorkelling location (there is a self-guided diving trail which is marked by glass plaques) and is known to be home to as many 60 different fish species and more than 200 marine plant species.

Hallett Cove Conservation Park
The rock formations at Hallett Cove offer a rare insight into the continent's past. Glacial rocks at Hallett Cove lie between older and younger sequences of rock. Along the cliff top are 600 million year old folded purplish sandstone siltstones. In the amphitheatre the siltstones are covered by sandstones with fossils and clays formed in the last five million years. An interpretative walking trail has plaques describing the Conservation Park's cultural and geological heritage. Particularly impressive is The Sugarloaf which, as the excellent interpretative sign explains, is "named for its resemblance to a mass of hard refined sugar, is the best known feature of the park. Its shape is due to erosion by rain and wind over the last few thousand years. However the layers tell a much longer story. Around 280 million years ago southern Australia (including Hallett Cove) was covered by an ice cap. It melted about 270 million years ago. The lower red layers of boulders and sediment were deposited on the bottom of an ancient glacial meltwater lake. When the lake drained the white sand was blown over the red sediments. The brown cap is clay deposited from rivers about three million years ago." The glacial pavements along the northern cliff tops are recognised as the best record of Permian glaciation in Australia. The most significant rock features are the glacial scratches on the cliffs and rocks which are 270-280 million years old. These scratches are the result of large rocks being carried long distances by the slow, inexorable movement of the glaciers. The formation of rock layers at Hallett Cove can be linked with other continents in the Southern Hemisphere. They're a vital link in the history of the breakup of the vast continent known as Gondwanaland into Australia, Antarctica, India, Africa and South America.

* In 1837 the explorer C.W. Stuart travelled through the area looking for lost horses.

* A whaling station was established at the mouth of the Onkaparinga River in 1841.

* By 1841 Old Noarlunga had become the central location in the area with traffic moving up and down the Onkaparinga River. The township was laid out by the South Australian Company which sold frontages for 4 shillings per foot.

* A mill was established in 1843. Whaling stopped that year.

* In 1856 the District Council of Noarlunga was formed.

* In 1859 the town of Port Noarlunga was surveyed and offered for sale.

* It wasn't until the 1920s that Port Noarlunga became important in its own right.

* In 1921 the modern Port Noarlunga jetty was built.

* Aboriginal stone implements were first discovered by Europeans at Hallett Cove in 1934.

* In 1972 Old Noarlunga was bypassed by the Main South Road.

* Today Port Noarlunga is both a commuter zone as well as a popular fishing, diving, snorkelling and holiday destination.

The official site is located at https://southaustralia.com/products/fleurieu-peninsula/attraction/port-noarlunga-beach-jetty-reef-and-aquatic-trail. 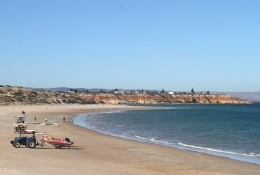 The beach at Port Noarlunga 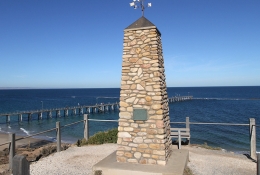 The Collett Barker Memorial above the jetty at Port Noalunga 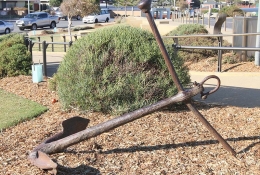 The anchor of the David Witton outside the surf club 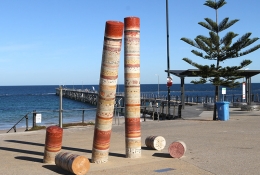 Core Values Totem Poles near the jetty at Port Noarlunga 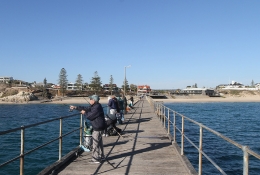 Fishing off the jetty with Port Noarlunga on the horizon 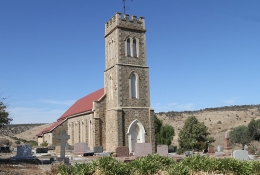 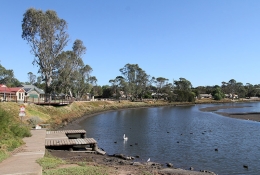 The Onkaparinga River at Old Noarlunga 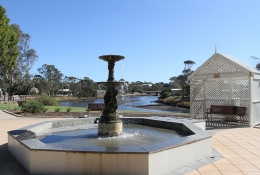 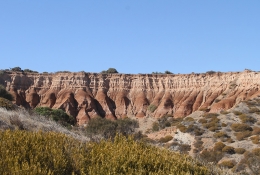 The eroded rock formations at the Hallett Cove Conservation Park 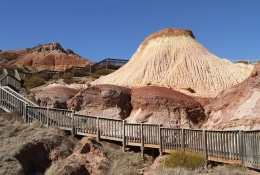 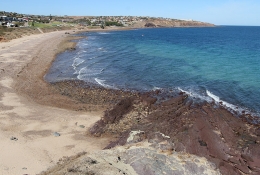 The view along the beach at Hallett Cove Conservation Park