Port Pirie is South Australia's seventh largest city after Adelaide, Mount Gambier, Victor Harbor, Whyalla, Murray Bridge and Port Lincoln. The city's economy is driven by the huge silver, lead, gold, copper and zinc smelters which process the raw ore brought from Broken Hill. The substantial port services both the surrounding rural areas as well as the minerals. Although it is primarily an industrial city it does have a gracious and impressive main street and some spectacularly impressive and unusual buildings.

Port Pirie is located on the eastern shore of Spencer Gulf 224 km north of Adelaide.

When Samuel Germein found the creek upon which Port Pirie developed it became known as Samuel's Creek. Then, in 1845, a schooner named John Pirie travelled up the creek, loaded a flock of sheep and transported them to Port Lincoln. This led the South Australian governor, Governor Robe, to name the settlement Port Pirie. John Pirie, after whom the town was named, was a director of the South Australian Company.

Port Pirie Cultural Precinct
Located at 3 Marie Elie Street, the Cultural Precinct is a combination of the city's Visitor Information Centre, an Arts Centre, the Shakka the Shark Exhibition and an interactive Virtual Reality Shark Cage Dive. The building is a clever combination of the city's maritime history - the front is designed in the shape of a ship's bow - and the railways with the paving and dog spikes on the entrance ramp. The building also provides information about the history and heritage of Port Pirie. The building also contains a replica of a 5.5 metre white pointer shark which was caught near Port Germein and an interactive simulation of what it is like to be in a shark cage when a shark attacks.

Pirie Rail Express Miniature Railway
Located at the Port Pirie Cultural Centre, this miniature train, driven by the tiny Lady Pirie diesel engine, takes passengers around a 1.5 km track (the journey takes about 15 minutes) on the first and third Sundays between 11.30 am - 2.30 pm. For more information tel: (08) 8633 8700 or 1800 000 424 or book at the Visitor Information Centre.

Pirie Model Railway
Located at the Port Pirie Cultural Centre, the Pirie Model Railway operated between 11.30 am - 2.30 pm on the first Sunday of each month. The whole operation is designed as a miniature village and there can be eight model trains running at once. Part of the attraction is that there is a vantage point where the entire operation can be viewed.  For more information tel: (08) 8633 8700 or 1800 000 424.

Port Pirie Historic and Folk Museum
Located on Ellen Street, this remarkable building - the Port Pirie Railway Station (1902) combined with the Customs House (1882) and the Central Police Station (1882) is now the Port Pirie Historic and Folk Museum. The old Customs House (1882) has been developed so it looks like a house from around 1900. The old Railway Station (1902) contains a scale model of Port Pirie's smelters and a blacksmith's display. And the old Police Station (1892) has been developed so the south side is a series of miniature shopfronts. It is open from 10.00 am - 4.00 pm Monday to Friday and Sunday 1.00 pm - 4.00 pm. Tel: (08) 8632 3435. For more information check out https://www.nationaltrust.org.au/places/port-pirie-railway-station.

Port Pirie RSL Military Museum
Located in the Port Pirie RSL on The Terrace and opened in 2009, the Military Museum ranges across all conflicts, from the Boer War to the war in Afghanistan, focussing on personal stories and memorabilia which has been donated by the families of servicemen and women. The museum includes the kit bag of the soldier given the first regimental number in the Australian Imperial Forces; a Dead Man’s Penny sent to the relatives of fallen soldiers; a rare and unusual German Woven Paper Work Coat; a metal photo frame made from a dixie by a Japanese prisoner of war - the engraving achieved from a nail sharpened on a piece on concrete; diaries and personal relics from “Rats of Tobruk” soldiers; postcards and native garments from Somalia, limited edition statue and story of  Horrie the Wog Dog - a four legged War Hero, medals, badges, trench art and original uniforms are always on display.
There is also an exhibit recording the history of Number 2 Bombing and Gunnery School RAAF in Port Pirie during World War II.  No 2 B.A.G. was opened in June 1941 and by November 1943, 3,500 airmen had passed through the school.  Many of the RAAF crews who flew from Britain across Europe in Lancaster and Mosquito aircraft trained in Port Pirie. For more details check out http://community.history.sa.gov.au/port-pirie-rsl-military-museum. It is open from 11.00 am - 4.00 pm Monday to Saturday and 11.00 am - 2.30 pm Sunday. Tel: (08) 8633 1448.

Port Pirie Molfettesi Fishing Boat Museum
Located on the foreshore of the Port Pirie River, the Port Pirie Molfettesi Fishing Boat Museum celebrates the lives of the city's early Italian migrants. It contains a wooden fishing boat, displays of Our Lady or Martyrs and Blessing of the Fleet, and an interactive history of the early Italian fishing migrants and their lifestyle in Port Pirie. The museum is open from 1.00 pm - 4.00 pm every day.

Blessing of the Fleet
On the second Sunday in September the statue of Madonna Dei Martiri is carried to the local wharves by members of the Italian community and the town's fishing fleet is blessed.

Port Pirie Heritage Walk
Check out page 22 of the Port Pirie Visitor Guide - http://editions.finsbury.com.au/PortPirie/PortPirieVisitorGuide/index.html - which lists a total of 31 places of historic interest in and around the town. Of particular interest are:
1. Port Pirie Railway Station (see above)

3. World War I Memorial Gates in Gertrude Street. Completed in 1923.

4. Navy Memorial in Norman Street - note that it is a flower bed in the shape of an anchor.

8. Federal Hotel - located at the end of Alexander Street, a handsome hotel originally built in 1898 and named The Rising Sun. It changed its name to celebrate Federation in 1901.

9. Memorial Park - located in Norman Street, and with the anchor of the 'John Pirie', which was lost in 1845 and salvaged in 1968, as its centrepiece, the Memorial Park was dedicated to veterans of the Korean, Malayan, Borneo and Vietnam wars. It is believed to be the first Memorial Park in Australia to commemorate those battles.

15. Greek Orthodox Church - located in Florence Street and a symbol of the importance of the local Greek community. It was built in 1957.

17. St Paul's Anglican Church - Located on the corner of Florence Street and David Street, this simple church was completed in 1899 and became the Anglican Cathedral, when Port Pirie became a cathedral city, in 1998.

18. Carn Brae - located at 32 Florence Street 'Carn Brae' was built in 1905 for W. H. Moyle who named it after Castle Carnbrae in Cornwall near where the Moyle family  lived. It has an extraordinary and unusual building which includes valuable stained glass windows and a tall widow's walk dominating the roof line. The Moyles made their money producing ice, cordials and soft drinks.

19. Nyrstar Port Pirie Smelter - it is now one of the largest lead smelters in the world with the stack, which towers over the city, being 205 m high and being completed in 1979.

20. Adelaide Steamship Company - located in Ellen Street, this low lying building is a symbol of the importance of the city as a port.

21. International Hotel - located on the corner of Ellen Street and David Street, this solid hotel was completed in 1874 and opened in 1875 by James Henderson Howe.

24. Post Office - located at 79-81 Ellen Street, next to the Railway Station and built around 1910. The South Australia Heritage Places Database points out that its significance is that it "expresses the period of economic growth in Port Pirie during the 1870s, which was a consequence of agricultural expansion in South Australia and the development of the town as a major port and regional centre. The building forms an important element in the commercial streetscape of Port Pirie." It was designed by Edward Woods and built in 1880, with extensions in Edwardian Baroque style designed by Charles Owen-Smyth and built in 1905-1907. For detailed information about the building check http://www.environment.gov.au/cgi-bin/ahdb/search.pl?mode=place_detail;place_id=106137.

29. Family Hotel - Located at 134 Ellen Street and built in 1904. It has some very attractive with well preserved lace ironwork on the veranda.

* Prior to the arrival of Europeans the district was known as 'tarparrie' (possibly meaning 'muddy creek') by the local Nuguna Aborigines.

* The area was first explored by Matthew Flinders who sailed up the Spencer Gulf in 1802.

* In 1839 Edward Eyre led an expedition from around Port Augusta north to Lake Eyre.

* In 1846 J. A. Horrocks discovered a pass through the Flinders Ranges and down onto the coastal plain.

The muddy creek upon which the town's port was based was originally known as Samuel's Creek after its discoverer, Samuel Germein. Around 1845 the schooner John Pirie (it was owned by John Pirie one of the directors of the South Australian Company) made its way up Samuel's Creek and loaded a flock of sheep which it transported across Spencer Gulf to near Port Lincoln. It was as a result of this that Governor Robe named the site Port Pirie.

* In 1874 the government built a new and larger wharf at Port Pirie. That year saw a telegraph line to Adelaide completed.

* The town's first government school was opened in 1877.

* The first Italian immigrants arrived in Port Pirie in the early 1880s.

* By 1880 over 2.7 million bushels of wheat were being exported from Port Pirie.

* The rail network was connected to Broken Hill in 1888.

* The smelting works was constructed in 1889.

* By 1891 Port Pirie was the second largest centre in South Australia - after Adelaide.

It was the largest smelter in the world.

* The first Greek Orthodox church in South Australia was opened in 1925 in Port Pirie.

* By 1934 Port Pirie had the largest single-unit lead-smelting works in the world.

* In 1937 the broad gauge railway line to Adelaide was completed

* The construction of the city's wheat silos startd in 1962.

* The last passenger train arrived in the town in 1967.

* In 2014 Nyrstar signed an agreement for the redevelopment of the Port Pyrie smelter. It is designed to be a "poly-metallic processing and recovery facility".

There is a useful, downloadable brochure on the town which can be accessed at http://editions.finsbury.com.au/PortPirie/PortPirieVisitorGuide/index.html. 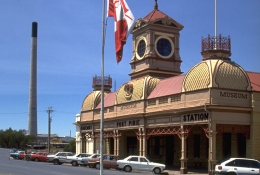 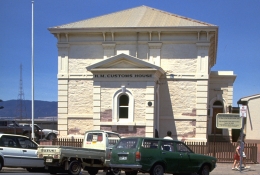 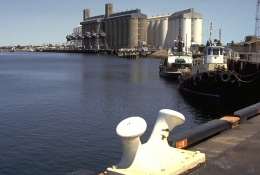 The silos and port at Port Pirie