Although it is now a small quiet town on the Yorke Peninsula, Port Victoria is one of the most romantic and historically important settlements in South Australia. The town calls itself 'the last of the windjammer ports' and it is this romantic connection with the age of sail and the great clipper ships that gives the town its special magic. From the 1870s when the town's jetty was built there is an extraordinary story of how wheat in 180 lb (80 kg) bags was loaded onto bullock drays, piled up in the town's main street, pushed and pulled on trolleys along a railway that ran to the end of the jetty, loaded into ketches and taken out to the clipper ships where it was loaded into the holds before the ships set sail around Cape Horn for the markets in Europe. It was a town where sailors from around the world were entertained on weekends at dances and social gatherings. Today it might be a sleepy, small rural town but its history is filled with adventure and romance.

Port Victoria is located on the eastern shore of Spencer Gulf 195 km north west of Adelaide via the Princes Highway, the Yorke Highway, Ardrossan and Maitland.

Maritime Museum
Located at the land end of the town's jetty and originally the general cargo shed (built in 1878), the National Trust Maritime Museum at Port Victoria is unmissable and unforgettable for all those people who want to learn about the windjammers and the wheat trade with Europe. As recently as 1949 windjammers were still sailing into Spencer Gulf, mooring offshore and being loaded with 180-lb (80kg) bags of wheat before heading south to the Roaring Forties, rounding Cape Horn and making their way to the markets of Europe. They are now a distant memory but the stories and the memorabilia – there were 42 ships wrecked off the Yorke Peninsula coast between 1865-1933 - are vivid and memorable. Check out  http://www.community.history.sa.gov.au/organisations/port-victoria-maritime-museum for more details. Opening hours are 2.00 pm - 4.00pm on Saturday and Sunday and in January it is open 2.00 pm - 4.00pm on Tuesday, Thursday, Saturday and Sunday.

Jetty
The Port Victoria jetty dates from 1876 when local farmers complained about the incredible difficulty of loading bags of wheat into clippers which were waiting offshore. The jetty was eventually opened for business in 1878 and consequently is now one of the few remaining original jetties used by the windjammers. In 1878 two large goods sheds were built and the L-shape of the jetty was added in 1883 to provide shelter from the south westerly winds. The largest vessel to arrive at Port Victoria was the Cardigan Castle which left the port in 1879 carrying 1,800 tons (1,829 tonnes) of wheat. The last vessel to leave the port was the Pamir in 1949.

The Cliff Top Walk
This is a pleasant walk south along the cliffs from the Maritime Museum. There are six places with geological plaques which tell the story of the volcanic eruptions which produced the basalt rocks near the jetty. These eruptions occurred 2,000 million years ago. At point 6 on the trail are layers of black basalt and pink porphyry which are the result of volcanic action. There are also six places along the route which tell of the history and the flora of the area.

The Historic Walk
An excellent walk which allows the visitor to experience what Port Victoria must have been like during the golden age of the windjammers. There are eight stops - six in the main street and two on the first street up from the jetty - which include the hotel, jetty, post office, banks, Memorial Hall, flour mill, St Alban's Church, Symond's Cafe, the bakery, butcher's shop and the town's early general stores. The historic photographs on the brochure (available at the Maritime Museum) are fascinating.

Diving off Wardang Island
Located 10 km off the coast from Port Victoria, Wardang Island is recognised as one of South Australia's premier dive locations. There are eight wrecks off the coast - five are of schooners and coastal steamers – the Monarch, Australian, Investigator, MacIntyre and Moorara – that carried wheat and other local cargo and four – the Aagot, Notre Dame, D’Arvor and Songvaar – are three masted square riggers that transported grain to Europe. The Wardung Island Maritime Heritage Trail diving trail, complete with a waterproof booklet for underwater use and underwater plaques next to each of the wrecks, has been established. There are mooring buoys at five of the wrecks. The island is an Aboriginal reserve and permission is needed from the Point Pearce Community Council. Contact (08) 8207 2378 for details. Check out http://www.portvictoria.org.au/WardangDivingtrail.html for details and http://www.mud-maps.com/map-store/carto-graphics-wardang-island/map-3187/preview/ for a map.

* Prior to the arrival of Europeans the Yorke Peninsula and the area around Port Victoria had been inhabited by people from the Narangga Aboriginal language group.

* In 1802 Matthew Flinders sailed down the coast of the Spencer Gulf. He named Point Pearce after a man named Pearce who worked for the British Admiralty.

* Port Victoria was first surveyed in 1839 by James H. Hughes who reported that he had discovered fresh water "only seven feet below the surface one-and-a-half miles from the head of the inner bay". He predicted, quite incorrectly, that Port Victoria would become a large and successful town.

* By 1847 it was estimated there were 500 Narangga people living on Yorke Peninsula.

* In 1867 the Port Pierce Aboriginal Mission was established. Slowly the Narangga people on the Yorke Peninsula settled at the mission.

* In 1876 the town was surveyed and named Wauraltee. Although it was always known as Port Victoria it was not until 1940 that the name was officially changed.

* In 1879 the Cardigan Castle, the first windjammer to sail from Port Victoria, left with 1,800 tons of wheat bound for Europe.

* The last windjammer sailed out of Port Victoria was the Pamir in 1949.

* Since 1949 Port Victoria has become a pleasant holiday resort. It still retains the feel of an old sailors port.

The town has its own website which has lots of useful information. Check out http://www.portvictoria.org.au/ 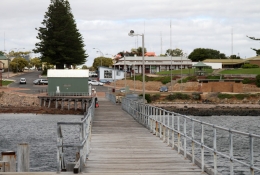 View up the main street from the jetty at Port Victoria. 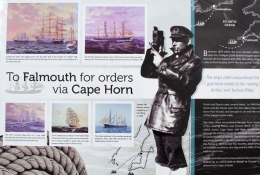 An account of the last Grain Race from Port Victoria outside the Maritime Museum. 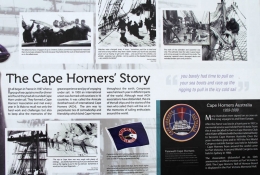 One of the information placards outside the Port Victoria Maritime Museum. 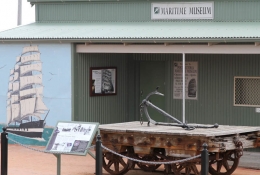 The Port Victoria Maritime Museum located in the old General Cargo shed at the end of the jetty at Port Victoria. 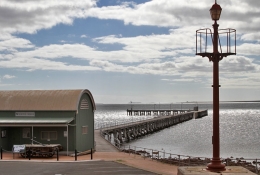