Quiet holiday and retirement town on the Yorke Peninsula.

Port Vincent is more upmarket than most of the holiday towns on the west coast of Gulf St Vincent as it is both a holiday and a retirement destination. It has a genuinely delightful beach and there is a feeling of elegance and permanence which is not typical of many of South Australia's wonderfully temporary and casual coastal towns. There is really only one reason for visiting Port Vincent: relaxation.

Port Vincent is located due west of Adelaide across Gulf St Vincent. It is 192 km from Adelaide via the Princes Highway and the Yorke Highway.

Port Vincent was originally known as Surveyors Point. It was named Port Vincent by the surveyor, Robert Cock, who also named the bay Port St. Vincent. No one is sure why he chose the names but it is likely that he took both names from Matthew Flinders who on 30 March, 1802 at the head of the Gulf, named it Gulf of St. Vincent after Admiral Lord St Vincent (John Jervis).

The things to do and see in Port Vincent are all holiday based: test your skill and try and catch some blue swimmer crabs in the shallows off the shore; get some diving equipment and test your skills diving for scallops; are you a sufficiently talented angler to catch an evening meal of fresh mullet, salmon, flathead, bream, garfish, whiting or squid; go for walks along the beaches and in the hinterland; go swimming on the town's safe main beach.

Walking Trails in the area
(1) a 1500 m trail runs from Marine Parade north along the shoreline and up 126 steps to Old Coast Road where, from the cliff top lookout, there are impressive, panoramic views across Gulf St Vincent.
(2) a 1500 m trail runs north of the marina development to a picturesque water reserve with outlets to Buttfield Avenue and Old Coast Road. A timber bridge and boardwalk cross the dry creek bed.
(3) a 1500 m trail runs south from The Esplanade with steps to 800 metre long cliff top trail. Return along the beach or back along the trail. The views across Gulf St Vincent often include sightings of pods of dolphins.

Port Julia
If  Port Vincent is too crowded for your liking you can always retreat 12 km further north along the coast to Port Julia which has no facilities (apart from a camp site) and is the essence of Yorke Peninsula 'getting away from it all' with a few holiday shacks, some good fishing, a virtually deserted beach and pleasant walks along the cliffs overlooking Gulf St Vincent.

* Prior to European settlement the area around Port Vincent was inhabited by the Narangga Aborigines whose lands spread across the entire Yorke Peninsula.

* The first European to explore the coast where Port Vincent now stands was Matthew Flinders. A monument in town records: "Captain Flinders, Commander of H.M. sloop Investigator, discovered, and on 30 March, 1802 at the head of the Gulf, named it Gulf of St. Vincent after Admiral Lord St Vincent (John Jervis). The same day he named Yorke Peninsula, after the Rt. Hon. Charles Philip Yorke of the Admiralty. Flinders landed at the head of the Gulf and walked towards Hummock Mount."

* The town was first known as Surveyors Point but it changed to Port Vincent when the town was laid out in 1877.

* By the 1850s land was being taken up in the area and sheep were being grazed.

* By 1867 sheep had given way to wheat production which led to pressure from farmers for good port facilities to ship their wheat to local and overseas markets. Initially a private jetty was built.

* By the early years of the twentieth century fishing had become an important local industry. In 1904 the government introduced fishing licences.

* In 1926 the Port Vincent wharf was extended. In 1927 navigation lead lights were erected.

* In 1930 a pipeline was laid from the Port Vincent wharf to the Shell depot to carry bulk fuel.

* By 1949 regular steamship services to the port stopped.

* By 1960 there were eleven fishing vessels operating out of Port Vincent. As the industry declined so holidays and coastal retirement became more important.

The photograph at the top of the page - Sunset over Spencer Gulf - was supplied by South Australian Tourism. 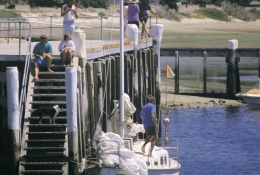 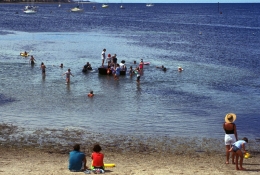 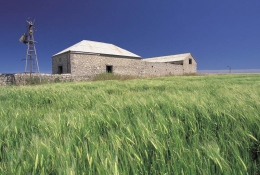 Farm buildings and fields of wheat on the road from Curramulka to Port Vincent (photo Adam Bruzzone, copyright SATC)