Historic copper port at the head of Gulf St Vincent

Port Wakefield is a quiet, but historically important, town which is used as an important stopover for people travelling along Highway 1 between Adelaide and Port Augusta. It was once a major port - firstly for copper from Burra and later for wool. With mangroves growing on the narrow channel, it is now used primarily for small fishing boats and by holidaymakers.

In 1849 the copper company at Burra established a port at the mouth of the river Wakefield, and called it Port Henry. When the township was surveyed the name was changed to Wakefield. It was named after the River Wakefield which was located in 1838 by William Hill who named it after Edward Gibbon Wakefield, the person whose vision of colonisation had been largely responsible for the establishment of South Australia.

Port Wakefield Historic Walk
The Port Wakefield Historical Walk can be downloaded (it is two separate A4 sheets) at https://www.portwakefield.sa.au/historical-walk. It lists a total of 40 places around the town and provides relevant historic information and a useful map. There are a number of impressive buildings and monuments in the town.
Of particular interest are:

St Albans Anglican Church
Located at 12 Burra Street, and now the Salt of the Earth Cafe, this charming church was built in 1873 and the hall next door was completed in 1905.

Old Port Wakefield Police Station and Court House Museum
Located at 2 West Street, the Port Wakefield Old Court House Museum was completed in 1880. It has been described as "Limestone construction, single storey, rendered quoins and dressings. Asymmetrical gable roof, with side gables, timber doors and windows. ' Port Wakefield Institute AD 1879' on wall. CGI roof. Note, back wall stonework left rough finished for future additions alongside. Presumably large hall, one day bigger than the Institute building. Rising damp at base. Timber gables of interest, picturesque style with scrolled arch trims." It is important as an early work of Colonial Architect, Edward Hamilton While. The Courthouse Museum is open on the first Sunday of each month from 2.00 pm - 4.00 pm, tel: 0428 671 096 or 0409 286 177. For more information check out https://www.wakefieldrc.sa.gov.au/page.aspx?u=904.

Matthew Flinders Monument
Located in Wakefield Street, the Matthew Flinders monument, unveiled in 1948, records the first European exploration of Gulf St Vincent. "Captain Flinders, Commander of H.M. sloop Investigator, discovered, and on 30 March, 1802 at the head of the Gulf, named it Gulf of St. Vincent after Admiral Lord St Vincent (John Jervis). The same day he named Yorke Peninsula, after the Rt. Hon. Charles Philip Yorke of the Admiralty. Flinders landed at the head of the Gulf and walked towards Hummock Mount." Flinders found that the water was so shallow that he had to row about 12 km from his vessel and then walk another kilometre through the mudflats and mangroves before he reached the true shoreline. Check http://monumentaustralia.org.au/themes/landscape/exploration/display/51566-matthew-flinders-expedition for more details.

Memorial to the Sailing Ketches
At the port there is a memorial with an anchor which is: "In memory of sailing ketches trading from 1850-1930. Port Wakefield from 1849-1857, a large number of bullock and mule teams travelled the gulf road between Burra and Port Wakefield, carting copper ore from the Burra copper works to the port, returning with coal and other requirements. In 1849 the copper company established a shipping place for ore at the mouth of the river Wakefield, and called it Port Henry. When the township was surveyed by the government the name was changed to Port Wakefield. Small sailing barges landed cargoes of coal on the shore, and carried copper ore to Port Adelaide, or to large sailing ships anchored off shore."

The Importance of Port Wakefield
In the Register, a local newspaper, a journalist wrote of the site: "An important discovery has been made at the head of Gulf St Vincent by Mr Buck, lighterman, being nothing less than the existence in that quarter of an available harbour for coasters of some burthen, with good natural accommodation for the purpose of loading and discharge. The harbour is the embouchure of the River Wakefield, and, though anything but obvious to a mariner uninitiated in the mysteries of the locality, is nevertheless easy to approach and secure." The result of this was that Mr Buck managed to persuade the copper manufacturers at both Burra and Kooringa to send their copper to Port Wakefield thus reducing the trip from the mines to the sea by some 50 miles. Given that bullock teams travelled 9 miles a day this reduced the land journey by nearly six days.

* Captain Matthew Flinders, Commander of H.M. sloop Investigator, discovered, and on 30 March, 1802 at the head of the Gulf, named it Gulf of St. Vincent after Admiral Lord St Vincent.

* The River Wakefield was reached in 1838 by William Hill who named it after Edward Wakefield, the person whose vision of colonisation had been largely responsible for the establishment of South Australia.

* By 1849 reports were filtering through of the excellence of the location as a port. A lighterman named Buck discovered the mouth of the Wakefield River.

* By the end of 1849 the copper company had established a place for shipping ore at the mouth of the river Wakefield, and called it Port Henry.

* By 1850 Port Wakefield was receiving copper from Burra and returning from England with coal.

* Port Wakefield can claim to be the first town to be established north of Adelaide in the infant colony of South Australia.

* Between 1850 and 1877 (the mine at Burra stopped sending copper to the coast in 1877) Port Wakefield was a prosperous and important seaport.

* By 1853 muleteers from Uruguay were being brought to the area to haul copper from Burra to Port Wakefield by mule train.

* By 1866 Port Wakefield was the second largest wool exporting port (Adelaide was the largest) in the state.

* In 1870 a tramway was built to service towns inland from the port. The trams were horse drawn.

* In 1923 the local railway workers moved to Peterborough when the broad gauge railway was completed.

* Today Port Wakefield is a small centre which is economically driven by the traffic which passes on its way between Adelaide and Port Augusta.

There is a useful local website. Check out https://www.portwakefield.sa.au. 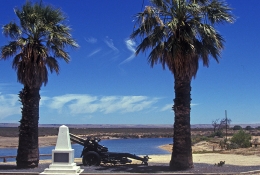 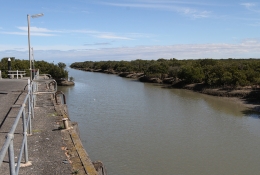 The old port at high tide 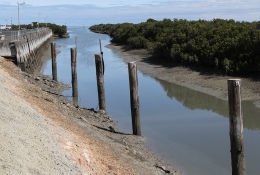 The port at low tide