Port and holiday destination on the Gippsland coast.

Port Welshpool is a popular holiday and beach resort destination which relies heavily on its commercial fishing fleet as its core business. The town is a suitable starting point for explorations of Wilsons Promontory, the beautiful Agnes Falls and the Corner Inlet Marine and Coastal Park. It is possible to join a cruise out and around Wilsons Promontory.

Port Welshpool is located 200 km south-east of Melbourne via the South Gippsland Highway and Leongatha.

An early surveyor claimed that the town was named after Patrick Welsh, who settled in the district and became a landholder in the Alberton area. In 1886 this was challenged by the journalist John Stanley James, who claimed the name came from a village on the border of Wales and Shropshire. The town was gazetted as Welshpool in 1851, and was only officially renamed Port Welshpool in 1952.

Fishing
Fishing is hugely popular with both gummy shark, snapper, flathead and trevally being particularly common. There are numerous articles on the web describing the best places and times for fishing in the area. This piece on Port Welshpool Flathead is useful. Check out http://fishingmonthly.net.au/Articles/Display/10949-Port-Welshpool-Flathead.

Port Welshpool and District Maritime Museum
Located at 12 Turnbull Street (the corner of Turnbull and Townsend Streets), the  Port Welshpool and District Maritime Museum is open on request and on weekends between 12.30 pm and 4.30 pm. The house, built in 1881, was one of the first substantial dwellings to be constructed at Port Welshpool. The builder, J. Avery, had to walk 21 miles from Port Albert every Monday, and returned by foot each weekend. It is thought to be one of the oldest buildings in the shire of South Gippsland. On the lawn is the fishing boat, the Janet Isles, which was used by the house's owners, the Smith family, for several generations. In fact, as the website explains, the museum is based around the Smith Family's collection. "The Port Welshpool and District Maritime Museum is based around a collection of marine items, maritime relics, official documents, photographs and other pieces of historical value. The collection was gathered by Mr. William Bruce McGuire Smith and his sons Richie and Arnie, over an 80-year period of professional fishing in Bass Strait. Mr. Smith Senior was the first fisherman to base his activities at Port Welshpool." There is an excellent and detailed description of the museum and its contents at http://www.promaccom.com.au/Touring/PortWelshpool/Museum/PtWelshMuseum.htm. Tel: 0413 199 776.

Agnes Falls Reserve
Located 14 km north-west from Port Welshpool, and 9 km north-west of Welshpool via Slades Hill Road and Hazel Park Road, are the Agnes Falls, one of the highest waterfalls in Victoria. Located at the Agnes Falls Reserve, where the river plunges 60 m over the gorge. The lookout over the falls is an easy 200 metre walk from the car park. The damming of the river above the falls ensures the water supply to Welshpool and other local towns. The Parks Victoria Park Notes observes: "Agnes Falls Scenic Reserve protects a small remnant of the forests that once covered the Strzelecki Ranges. Tall Southern Blue Gums together with Blackwood and Silver Wattles grow within the sheltered gorge and along the banks of the Agnes River. The cool moist conditions here support a diverse understorey of Hazel Pomaderris, Blanket-Leaf, Dogwood, Prickly Moses, Clematis and a ground cover of ferns. The drier north facing slope and ridge support an open understorey of native grasses and sedges. The canopy of tall eucalypts provides food and nesting areas, supporting many different species of birds including honeyeaters. The understorey composed of tall shrubs and small trees is home to the Eastern Yellow Robin, often seen perching sideways on low branches, eyes intently searching the ground for food." There is a useful, downloadable Park Note at http://parkweb.vic.gov.au/explore/parks/agnes-falls-s.r.

Wildlife Coast Cruises to Wilsons Promontory
This eight hour cruise leaves Port Welshpool jetty at 9.00 am (a coach picks up passengers from Cowes, San Remo, Wonthaggi, Inverlock, Meeniyan, Foster and Toora) and includes a walk and swim at Refuge Cove, a cruise around Wilson Promontory lighthouse, a visit to Skull Rock and an opportunity to see the seal colony at Kanowna island. It departs in the summer months on an average of two or three times a month. It proudly boasts: "An experience of a lifetime, visiting untouched islands and rugged coastlines that are not accessible by land, viewing amazing rock formations, spectacular marine and wildlife areas that most people wouldn’t dream exist." For all details check out http://www.wildlifecoastcruises.com.au/cruises/wilsons-prom.

* Prior to the arrival of Europeans the area was home to the GurnaiKurnai Aboriginal people of West Gippsland.

* When they were exploring the area Bass and Flinders recorded a flock of approximately 133 million mutton birds in the area. They reported that it was 80 yards long, 300 yards wide and, travelling at an estimated 50 m.p.h., took 90 minutes to pass overhead. The birds return to the Inlet every November, although in significantly reduced numbers.

* An anchorage, apparently established offshore near Snake Island, was used by whalers as early as the 1830s.

* The region was explored in the 1840s by the Gippsland Company, whose interest was stimulated by Count Paul Strzelecki's explorations of Gippsland and by the wreck of the Clonmel near the entrance of Port Albert.

* The area became part of a substantial land lease, stretching from the Albert to Agnes Rivers, taken out by John Gellion and partners, a Mr. Rickard and a Mr. Stratton.

* The town was gazetted as Welshpool in 1851. Settlement and trading began almost immediately as the town was thought to have considerable potential.

* An 800-foot jetty was constructed in 1859 but burned down soon afterwards. Its replacement was used to ship cattle and timber to New Zealand and Tasmania and to receive the fishermen's catches and imported supplies.

* The famous Australian novelist Hal Porter, who wrote portions of his autobiography, The Watcher on the Cast-Iron Balcony (1963), at nearby Hedley, recalled that cattle were steered in their hundreds across a long sand bar to Snake Island for pasturing.

* Chinese communities established themselves around the inlet as curers of fish and wandering Indian hawkers with their exotic wares became part of the local landscape.

* In 1889, a steam sawmill was built at Hedley by Mr Maison, who transported his railway sleepers, jetty piles and fish baskets to the port by bullock train, until a tramline was laid. Maison also received a badge of honour from the French government for the quality of the paving rocks he supplied for paving the streets of Paris.

* A hotel from a temporary township called Seaforth became the Port Welshpool Post Office in the late nineteenth century and it still serves that function today, although it has been considerably altered over the years.

* In 1890 the arrival of the railway boosted the local fishing industry. A school was built in the same year.

* The fish were carried to the station by horse and wagon until a tramline, which also ferried locals about for social occasions, was laid in 1904.

* In the 1930s a long jetty was built at the port. Around this time rock lobster fishing became important.

* Rail was eventually replaced by road transport in 1940.

* During World War II the jetty was used by minesweepers.

* Welshpool was eventually gazetted as Port Welshpool in 1952.

* A rather more unfortunate event connected with nature was the beaching of 300 whales in 1957, which attracted about 10,000 people to the township.

* In the 1960s the jetty was used by vessels exploring for oil in Bass Strait.

* In 1990 a SeaCat service began operating between Port Welshpool and George Town, Tasmania.

There is a useful local website. Check out https://www.visitpromcountry.com.au/towns/port-welshpool. 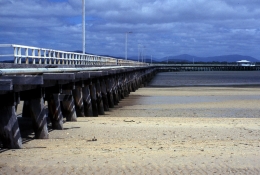 The jetty at Port Welshpool 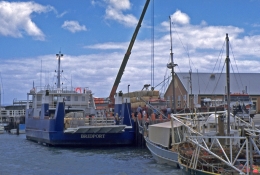 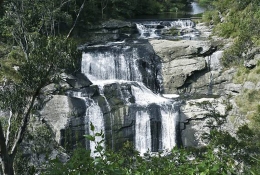