Popular holiday and retirement destination on the Bellarine Peninsula

Portarlington is a quiet residential town, now popular with both holidaymakers and retirees, which, in summer, is a popular Bellarine Peninsula destination. The town is located on the coast. Behind it lie hills where grapes and olives are grown. Attractions include a sailing club, an 18-hole golf course, excellent fishing opportunities, boat ramps, a safe swimming beach and a bicycle track that leads around the foreshore to Indented Head. It is claimed that the town once had the largest caravan park in the country.

Portarlington is located on a hill overlooking Port Phillip Bay 106 km south-west of Melbourne via Geelong. It is 32 km east of Geelong at the tip of a peninsula which juts out into Port Phillip Bay.

Portarlington was surveyed in 1851 and named Drayton but was renamed later that year. No one is quite sure where the name comes from. It may be in honour of Lord Arlington or possibly it was named after an Irish village, Portarlington. At the time there were a large number of Irish settlers in the area.

Portarlington Mill
Located at 7 Turner Court, the Portarlingon Mill is owned and operated by the National Trust. It is open on Sundays from Noon to 4.00 pm between September and May. The mill, a four-storey steam-powered operation, was built by T.H. Widdicombe of locally-quarried sandstone in 1857 on what is thought to be a former corroboree site. A small jetty was built on the nearby beach and boats carried the flour and bran to larger vessels in deeper waters. The operation was short-lived. It closed in 1874 and Widdicombe converted it into a brickworks which supplied bricks to Melbourne, Geelong and the Bellarine Peninsula. Widdicombe bricks and tiles were used in the construction of the Anglican churches at Portarlington and Drysdale. In the later nineteenth century, it was a factory, first processing seaweed for use as upholstery stuffing, later producing printing ink then artificial fertiliser. For more information check https://www.nationaltrust.org.au/places/portarlington-mill or tel: (03) 9656 9889.

Portarlington Hilly and Historic Walk
The excellent Walking Maps website (see https://walkingmaps.com.au/walk/286) has a short, energetic and mildly challenging walk up the hill from the Portarlington shopping centre to a vantage point which allows the visitor to enjoy the view across Corio Bay to the You Yangs and, on a clear day, to see the Melbourne skyline. The walk starts outside the Old Duke Hotel (1855) and walks past the unusual and original RSL building which was the former National Bank and is Heritage Listed - it has a small Memorial Garden; to St Patrick's Hall which dates from the 1940s and has unusual harlequin glass windows; past a small collection of traditional timber houses near the corner of Willis Street; and finally to "a delightful small rest place and garden, with a spectacular view over Corio Bay to the You Yangs."

Port Phillip Ferries
Port Phillip Ferries depart from Portarlington at 9.00 am and arrive at Docklands at 10.10 am. The service is seven days a week and departs from the harbour. Passengers need to book and to arrive 20 minutes before departure. Check out https://www.portphillipferries.com.au/portarlington-bellarine for more information.

Blue Mussels
The local delicacy are Australian Blue Mussels which are grown just offshore and harvested daily by the fleet moored in the harbour. The best way to experience this famous local produce is to visit Advance Mussel Supply at 230-250 Queenscliff Road, Portarlington or the Little Mussel Cafe at 40-42 Newcombe Street  - the Advance Mussel Supply website (see https://www.advancemussel.com.au) explains "Advance Mussel Supply is a family owned and operated business that has been farming Mussels in Port Phillip Bay, Victoria, Australia for over 30 years. We are one of the original Mussel farmers in Port Phillip Bay and one of the largest, with multiple growing sites at Clifton Springs and Grassy point aquaculture zones." Tel: (03) 5259 1377.

Indented Head
Indented Head is a quiet settlement and popular holiday destination located 6 km south-east of Portarlington, on the eastern edge of the Peninsula and the western shore of Port Phillip Bay. The beach provides safe swimming. There is a bicycle track, a camping area, toilets, a boat ramp and a caravan park.

Batman Park
Located off The Esplanade in Batman Park at Indented Head is a stone cairn which marks the spot where John Batman stepped ashore in May 1835. It was here that modern Melbourne has its origins. The landing of Matthew Flinders at Indented Head in 1802 is also commemorated on the memorial which was unveiled in 1931. Flinders gave the site its European name after observing the shape of the coastline from Arthurs Seat on the Mornington Peninsula. The Age on 19 October, 1931 reported: "Many representative men assembled at Indented Head on Saturday afternoon to do honor to the memory of John Batman the founder of Melbourne, and incidentally to remember what Mathew Flinders had done to make Port Phillip known. At the instance of the Bellarine Peninsula Development League a cairn had been constructed of ironstone gathered from the seashore close by and embodied in the cairn was a piece of dressed stone, which bore the inscription— -'John Batman, founder of Melbourne, formed a base here, Indented Head, on 29th May, 1935. Matthew Flinders landed here in 1802, and crossed to the You Yangs." See https://monumentaustralia.org.au/themes/landscape/exploration/display/33549-john-batman-and-matthew-flinders.

The Wreck of the Ozone
Off the beach at Indented Head, the paddlewheel of the baysteamer, Ozone, can still be viewed. The Ozone once carried passengers to and from Melbourne to the resorts of the Bellarine Peninsula. It was sunk offshore in 1925 to form a breakwater.

* In 1802  Lieutenant John Murray spent three weeks exploring the coast around Portarlington and the entrance to Port Phillip Bay.

* Later in 1802 Matthew Flinders mistook Port Phillip Bay for Western Port. Flinders made camp at Indented Head, 6 km south-east of Portarlington, and named it after the cleft in the coastline. He landed at the present site of Portarlington.

* In 1803 Surveyor-General Charles Grimes landed at the present site of Portarlington.

* In 1803 a convict escapee from a settlement on Port Phillip Bay, named William Buckley, made his way to the Bellarine Peninsula and was adopted by the local Aborigines who thought him a reincarnation of a dead leader. He lived with them for over 30 years, most of it presumably spent on the Bellarine Peninsula.

* In 1835 Buckley allegedly overheard the Aborigines plotting to attack a party of whites at Indented Head and he gave himself up to the party of John Wedge.

* Batman's sister-in-law became the first white woman to land at Port Phillip when she came ashore on the future townsite of Indented Head. An area known as White Woman's Rock is named in honour of this event.

* In 1843 Anne Drysdale settled on a nearby pastoral run which she named Drayton.

* Portarlington was surveyed in 1851 and named Drayton.

* In 1857 an enormous flour mill was built. It was a comment on the town's reputation as the 'granary of the colony'.

* A jetty was built to facilitate the shipment of the mill's produce in 1859.

* The jetty was extended then replaced in 1871 as Portarlington began to benefit from the steamer traffic in the bay. A Wesleyan church was built that year.

* The Anglican Church was completed in 1883. That year saw the construction of a local racecourse.

* The Grand Hotel in Newcombe Street was built in 1886.

* A Catholic church was consecrated in 1891.

* In the 1960s the town became a popular place for retirees from Melbourne.

There is a useful local website. Check out https://www.visitgeelongbellarine.com.au/destinations/portarlington. 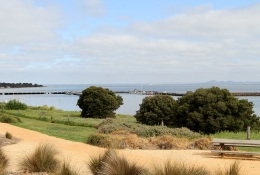 The walking path beside the harbour and pier 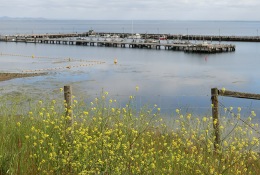 The harbour at Portarlington 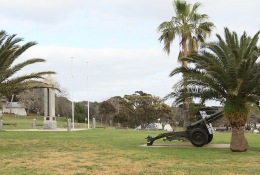 War memorial in the park near the Portarlington harbour 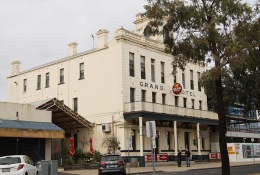 The Grand Hotel on Newcombe Street 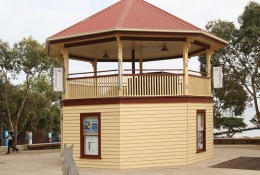 The band rotunda and information hub on Newcombe Street 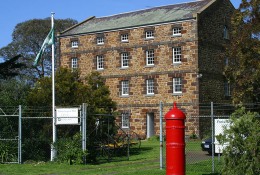 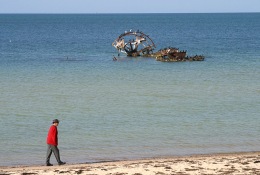 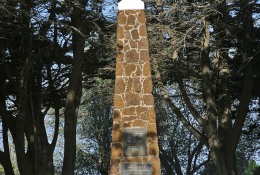 The monument to John Batman and Matthew Flinders at Indented Head