For most of its life, Prevelly has been a sleepy village known to surfers and the locals around Margaret River. In recent times it has become a fashionable haunt because of its pristine location, the sublime surfing conditions and the arrival of a number of resorts and cafes. It is still underdeveloped and has only a small number of houses spread across the vast sand dunes which rise from the edges of the Indian Ocean.

Prevelly is located 276 km south of Perth via Margaret River and 296 km via Dunsborough and Caves Road.

Prevelly takes its name from the Preveli monastery in Crete where Geoffrey Edwards, an Australian soldier, was given shelter by the monks during World War II.

Surfing
Prevelly is famous for its superb surfing conditions. It used to be the setting for the Masters surfing competition (it still is - but the competition changes its name according to sponsorship) and the steady waves which roll in from the Indian Ocean attract surfers from all over the country - as well as international board riders. This is a surf for serious surfers. The waves can be huge and the skills involved ensure that the viewing platforms at Surfers Point are often packed with admirers with binoculars.

St John the Theologian Church
St John the Theologian Church, on Wallcliffe Road at the entrance to the township, is a little piece of Greece on the Western Australian coast. It was built by Geoffrey Edwards as a permanent reminder of the debt of gratitude owed to the Cretan people by the allied soldiers who fought on Crete during the War. The church was completed in 1979. There is a plaque on the building which explains: "This symbolic Greek Orthodox chapel was given to the Greek people by Geoff and Beryl Edwards who founded the adjoining village and named it Prevelly as a token of gratitude to the Prevelly Monastry and surrounding villages on Crete, where after the Battle of Crete in 1941 the founder and hundreds of Australian and New Zealand and British soldiers were sheltered, hidden and helped to escape to the free world."

Wallcliffe
Arthur Bussell, a member of the famous Bussell family who gave their name to Busselton, built Wallcliffe, now located on the road between Prevelly and Margaret River, in 1855–65. It has the appearance of an English country house with its wide verandas, gabled roof and attic windows. It was built from local stone and pit sawn timbers by a team of workmen who, according to legend, included deserters from American whalers, an Aboriginal stockman and ex-convicts. It is recognised as one of the most important historic homes in the district. The house can be seen from the Wallcliffe Road.

The Plaque at Redgate
On 1 December 1876 the Georgette, a 211 ton steam and sail vessel, was grounded in Calgardup Bay just south of Isaacs Rocks south of Prevelly. A plaque near the rocks records the event: "While on her way to Albany the ship sprang a leak, the pumps failed and the stoke hold flooded. When she was still 20 miles (32 km) out to sea a boat was launched ready to be towed astern. It was stove in and its occupants thrown into the sea. Two women and five children drowned but the others were rescued by brothers Willie and James Dempster and crewman Dewar and Nunan. They made for the shore in the ship’s gig and reached Injidup twelve hours later. In the meantime passengers on Georgette kept bailing while the ship under sail headed for the coast and finally grounded. While the ship’s boat was in trouble in the surf two riders came galloping to the scene - Grace Bussell and stockman Sam Isaacs. They rode into the sea and with their timely help all on board reached the shore in safety and were taken to Wallcliffe House, the home of Grace Bussell, where they were welcomed and given shelter." The story of the rescue received international attention and the 16-year-old Grace Bussell was dubbed the "Grace Darling of Australia". In 1878 Grace Bussell was awarded a silver medal for bravery by the Royal Humane Society. Interestingly, and probably because he was an Aborigine, Sam Isaacs received only a bronze medal. He was later rewarded with 100 acres of land near Wallcliffe.

Exploring the Caves
Mammoth Cave
Mammoth Cave is located south of Prevelly on Caves Road. It was discovered by Tim Connelly around 1900 and is hugely important because of the fossils which were found.  These fossils included  the remains of a Tasmanian tiger, a Tasmanian devil and a giant kangaroo all of which have been extinct in Western Australia for hundreds of years. Over 10,000 animal bones were found in the cave. The cave was first opened to the public in 1904. Tim Connelly became the caretaker and guide. Mammoth Cave is open seven days from 9.00 am - 5.00 pm. There is a self-guided tour. For more information check out http://www.margaretriver.com/operators/7705 or tel: (08) 9757 7411.

Lake Cave
Lake Cave is located 2 km south of Mammoth Cave and is recognised as the most delicate and pretty of all the caves in the region between Dunsborough and Augusta. The entrance to the cave is through a collapsed cavern which forms a huge crater. This crater was first discovered by Fanny Bussell in about 1867 but it wasn't until the 1890s that Tim Connelly climbed down the 30 m cliff and entered the cave.The cave was open for public inspection in 1901. The lake and the delicate white formations, including an unusual ‘table formation’ created by a piece of flowstone and two columns, make this a cave of exceptional beauty. There are guided tours of the cave with the last tour at 3.30 pm. Check out http://www.margaretriver.com/local-business/7706-lake-cave or tel: (08) 9757 7411.

* Prior to the arrival of Europeans the area was inhabited by members of the Wardandi Aboriginal language group.

* The first European into the Prevelly district was Arthur Bussell, a member of the famous Bussell family who settled around Augusta but moved north to the Vasse River and established Busselton. He moved to the area in the early 1850s and built the family home, Wallcliffe, between 1855–65.

* Wallcliffe House is associated with a story of bravery and heroism which generations of Australian school children were taught. On 1 December 1876 the Georgette, a 211 ton steam and sail vessel, was grounded south of Prevelly. Two people from Walcliffe, 16-year-old Grace Bussell and Aboriginal stockman Sam Isaacs, rode their horses into the sea and managed to save many of the passengers. The story went around the world and Grace became known as the Grace Darling of Australia.

* In 1878 Grace Bussell was awarded a silver medal for bravery by the Royal Humane Society. Interestingly, and probably because he was an Aborigine, Sam Isaacs received only a bronze medal. He was later rewarded with 100 acres of land.

* The township of Prevelly was named after the Preveli monastery in Crete by Geoffrey Edwards, an Australian soldier who was given shelter by the monks at the monastry during World War II.

* In 1979 Edwards built the distinctly Greek, St John the Theologian Church, on Wallcliffe Road as an expression of the gratitude owed to the Cretan people by the allied soldiers.

There is no visitor information at Prevelly. The closest is Margaret River Visitor Centre, 100 Bussell Highway, Margaret River, tel: (08) 9780 5911.

There is a local website - http://www.margaretriver.com - which has extensive information about accommodation in the area. 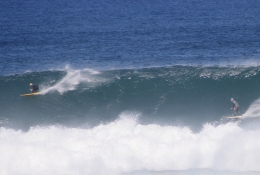 Surfing off Surfers Point with helmets and big boards. 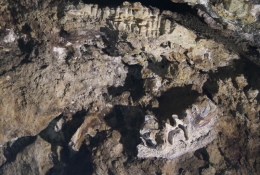 The jaw bone from a Zygomaturas trilobus (ancient megafauna) dating from 44,000 years ago - in the Mammoth Cave. 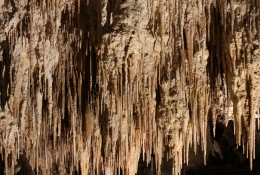 Part of the rich display of stalagtites in the Mammoth Cave. 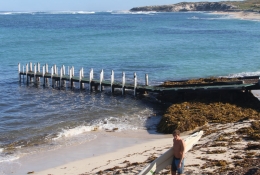 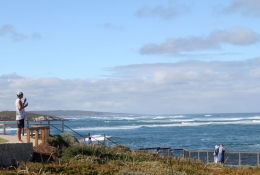 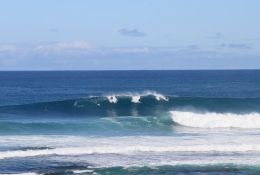 Surfing the relentless waves from the Indian Ocean at Prevelly. 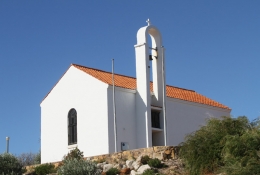 The church of St John the Theologian on the hill above Prevelly.