Reputedly "the most decorated cave per square metre in Australia"

It is claimed that the single cave which is open for guided tours is "the most decorated cave per square metre in Australia". Certainly the Princess Margaret Rose cave is a wonderfully simple experience. Visitors either arrive by cruise vessel from Nelson or drive to the car park. They walk to the visitor centre, explore the Interpretative Centre and then take a guided tour of the cave. There are camping facilities and three bush cabins are also available for overnight stays.

The Princess Margaret Rose Cave is located in the Lower Glenelg National Park 447 km west of Melbourne, 27 km from Mount Gambier and just 2 km inside the South Australia-Victoria state boundary.

Touring the Cave
This is a very simple activity. There is one cave which is accessed from inside the Visitor Centre. So visitors start by visiting the Interpretative Centre which tells the story of how the cave was formed and provides a history of how it was discovered and developed. Outside the Visitor Centre there is a landscaped picnic area amidst a stringybark forest and a small campground with three cabins (caravans are permitted). Daily tours of 40 minutes duration are conducted at 10.00 am, 11.00 am, 12.00 noon, 1.30 pm, 2.30 pm, 3.30 pm and 4.30 pm. Reduced tour times in winter (June, July and August) 11.00 am, 12 noon, 1.00 pm 2.00 pm and 3.00 pm. tel: (08) 8738 4171. The single cave features spectacular stalagmites, stalactites and helictites (long, thin formations which grow in different directions rather than up or down). There are also cave coral formations, rimstone pools and sawtoothed shawls. It is claimed, although how such a claim can be proved is questionable, that it is "the most decorated cave per square metre in Australia".

River View Nature Walk
The River View Nature Walk is a pleasant 20 minute walk through the bushland with views across the Glenelg River. The River View Nature Walk leads from the cave entrance to two lookouts over the Glenelg River Gorge. It takes in the 'Death Pit', a hole created by water dissolving away the limestone roof of a cave. The bones of animals which have fallen through the hole include those of the giant kangaroo, the marsupial lion, the giant echidnae and the Tasmanian tiger. The Nature Walk provides access to wildflowers and an opportunity to observe the local birdlife. For more details check out the downloadable https://parkweb.vic.gov.au/__data/assets/pdf_file/0006/315834/Park-note-Princess-Margaret-Rose-Caves.pdf.

Lasletts Loop Walk
This is an easy/moderate 4.5 km walk through different vegetation type which includes the lookouts over the Glenelg River Gorge. It is part of the longer, 250 km Great South West Walk. Check out the downloadable https://parkweb.vic.gov.au/__data/assets/pdf_file/0006/315834/Park-note-Princess-Margaret-Rose-Caves.pdf. for more details.

River Cruise to Princess Margaret Rose Cave
It is possible to take a leisurely 3.5 hour cruise with Glenelg River Cruises/Nelson River Cruises to the Princess Margaret Rose Caves up the Glenelg River from Nelson. The cruise leaves at 1.00 pm twice weekly and every day during school holidays. For more information tel: 08 8738 4191 and check http://www.glenelgrivercruises.com.au/cave_tour.html for prices and season details.

* The limestone was formed by the deposition of seashells when the entire area was covered by the ocean between 35 and 15 million years ago.

* The caves were created about 800,000 years ago by water seeping down from the river which was then 15 m above its present height.

* Prior to the arrival of Europeans the area was occupied by the Gunditjmara Aboriginal people.

* The first European into the area was Major Thomas Mitchell who named the Glenelg River after Lord Glenelg, the Colonial Secretary at the time. He reached the area in 1836.

* Europeans began to settle the area in the 1870s.

* By 1872 the Glenelg River had become a popular fishing destination. It was known for its bream, perch and mulloway.

* By the late 1800s shacks were being built by anglers along the Glenelg River.

* The first European to explore the caves was local grazier, Keith McEarchern, who was accompanied by J. Hutchesson and his son, Alan Hutchesson. They discovered a hole in McEachern's property in 1936.

* Over the next five years he built a public entrance and carved some steps in the limestone.

* The Lower Glenelg National Park was proclaimed in 1969.

* The cave became part of the Lower Glenelg National Park in 1980.

The dedicated website has information about prices and tour times. Check out https://www.princessmargaretrosecave.com. 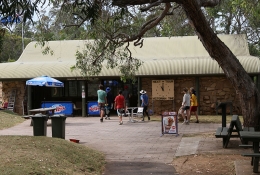 The entrance to the cave and the Visitor Centre 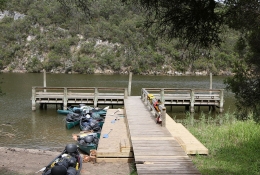 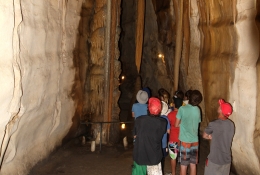 A tour admiring the formations inside the Princess Margaret Rose cave 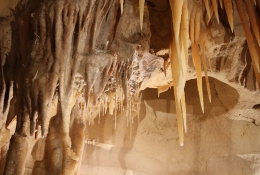 Impressive helictites and stalactites in the cave