Proston is a tiny settlement which was created after 1910 when the Queensland Government carved a few hundred acres off the large Wigton property and offered it for sale in smaller lots. The land was taken up by dairy farmers and the town became a dairy centre with a butter factory and a branch railway line. In recent times it has reverted to being a small and quiet country town surrounded by the rich farmlands of South Burnett. It is known as a major growing area for duboisia which is a native plant used in the pharmaceutical industry.

Proston was named after a local leasehold, the Proston Leasehold, which was established in 1846. It is claimed the word was probably derived from a Waka Waka word for a kurrajong tree

Shepherd Memorial Church of St Peter
Located on the corner of Drake Street and Wondai Road, the Shepherd Memorial Church of St Peter was built between 1937-1939 and won the 1940 Queensland Meritorious Architect Award for the firm of Brisbane architects, Lucas and Cummings. It is a Scandinavian-influenced church which was funded by a bequest of £40,000 from grazier Charles Shepherd of "Aston" near Proston. The Queensland Heritage Register notes: "St Peter's Church was built using locally-made cream-coloured Wondai bricks. The Wondai Brick and Tile Company made several thousand specially moulded bricks for the door and window reveals and the arched heads. In the words of the architects, "the building is 'a symphony in brick'" ... St Peter's Church has been recognised as an important 20th century building. The church's design was influenced by European and Scandinavian styles with high walls and a low-pitched tile roof and wide moulded eaves. Of particular note is the ventilation system which uses exceptionally high walls to give a large air space in proportion to the seating capacity of 100. There are both windows and ventilators but the windows do not open. The ventilators are designed to be opened at night to store cool night air in the roof space. The air heated by the congregation rises through grilles into the roof space and out through the gable ends allowing the cooler air to flow downwards. An article in Architecture magazine in 1943 described the building as: "of locally made cream bricks with a tile roof. The plan is a long rectangle with an apse at the east end and a vestry off one side. The entrance is on the south, towards the west end; it is marked by a square tower with a colonnaded lantern at the top surmounted by a weathervane carrying the symbol of St Peter. The organ gallery is above the entrance, whence it is approached by a stair, and opens on to a gallery overlooking the nave. The font is placed immediately opposite the entrance in a gap in the seating, which leaves a few seats between it and the west wall for use at christenings. The pulpit is in brick, and is placed in the south-east corner... The windows have steel frames, and are glazed with heat-resisting glass with a slightly greenish tinge, which helps to give a cool appearance to the interior. The ceiling is of wall board, set out in panels, the sides of the recesses being brilliantly coloured to tone with the windows and the ceiling of the eastern apse.
"The furnishings, altar, pews and other fittings, designed by the architects, were made from local hardwood. The cost of building was £2,755 19s 5d."
It goes on to explain the church's importance. "St Peter's Church has strong aesthetic value. Its scale and austere fabric and form have been influenced by Romanesque massing principles and twentieth century Scandinavian architectural detailing. The modernist aesthetic of the church juxtaposed with the rural townscape of Proston evokes extreme surprise. It is significant for its high quality workmanship in particular the face brickwork, which shows the influence of the Modern Movement popular in the 1930s.
"The Shepherd Memorial Church of St Peter is an outstanding example of church design for its period and location. Its massing and high quality brickwork are features of the design which show European and Scandinavian influences. The church is also significant for the way it was designed for the climate, through the use of an unusual ventilation system." For more detailed information about the church, check out https://environment.ehp.qld.gov.au/heritage-register/detail/?id=602813. Sadly, in 2018, it was put up for sale due to declining attendance numbers. It was de-consecrated in 2015.

Water Fountain and Sculpture
Over the road from the Church of St Peter is an amusing water fountain which features a fisherman straining on a rod in the optimistic belief that he has just caught a perch, bass or barramundi.

Boondooma Dam
Located 20 km west of the town the Boondooma Dam is a popular spot for fishing, camping, waterskiing, windsurfing and boating. Historically the district suffered acutely from drought and water shortages which the construction of Boondooma Dam in 1983 solved. It has a capacity of 204,200 ML and covers an area of 1,000 ha. The dam has become a popular place with camping and picnic facilities where locals and visitors could fish for bass, golden perch, silver perch and barramundi and go water skiing, sailing, windsurfing and boating. There are two boat ramps. For more information check out http://www.lakeboondooma.com.au.

Boondooma Homestead Museum and Heritage Complex
Located 47 km west of Proston at 8262 Mundubbera-Durong Road is Boondooma Homestead. Now listed by the National Trust, it was built in 1854-1855 by Alexander and Robert Lawson who settled the area in 1846. When the building was being restored it was discovered that it had been built to metric specifications by a Flemish stonemason. It is likely that it was the first metric building in Queensland.
Today there are five buildings of historic interest on the site. Most of the buildings were constructed of wooden slabs – iron bark or cypress – and originally had shingle roofs. The station's store was built of local stone to protect the supplies.
Queensland Heritage notes of the complex "Boondooma comprises built elements that are now uncommon examples of construction methods and techniques. The principal historic buildings include an 1850s stone storehouse, which is both rare in its method of construction and an early example of the use of the metric standard in Queensland. The main house and the post office are also important surviving structures. The survival of interior finishes in the main timber house, including wallpapers and linoleums, contributes to its rarity."
Boondooma Homestead is one of the few examples of early pioneer architecture which can be visited by the public in the Burnett region. It includes vertical and horizontal ironbark timbers. A sawing pit located to the North West was used in the construction of the homestead. It was completed in 1855, the wallpaper was ordered, and Alex Lawson and his new bride moved in. The roof of corrugated iron was put over the original wooden shingles in 1870.
The Stone Store was built to store supplies for the station workers, and later to local settlers until 1922. Constructed of roughly coursed random stone, it was built by German stonemason Wilhelm Brill, between 1854 and 1858. It originally had a shingle roof which was replaced by corrugated iron in the 1870s. Believed to be one of Australia's earliest structures built to metric measurements, it is an important relic from early European settlement.
The Post Office is thought to have been constructed about 1850, with extensions added in the 1950s.
Brownie's Hut is believed to be one of the original shepherd's huts from the ridge behind the Store, as shown on the 1861 survey and also in a pre-1918 photo. It was dismantled and removed in 1918, to be rebuilt on ‘Glentullock’ but it was returned to its original site in 2002.
The Cool Shed is a shed designed for Queensland. It manages to become cooler, the hotter a day becomes. When the sun shines on the roof the more cool air is drawn inwards and upwards thus keeping the interior several degrees cooler than the outside temperature.
The Boondooma Homestead is open from 9.00 am - 4.00 pm daily. There are guided tours but the homestead can be inspected without a guide. It has a wide range of local items and an impressive photographic display. They are proud of the fact that most of the items in the museum were actually part of the original station - there are tools that were used to build the Stone Store, Aboriginal artefacts, household items, musical instruments and vehicles used on the farm. It is also possible to camp near the homestead. For more detailed information there is an excellent website: check out http://www.boondoomahomestead.org.au or tel: (07) 4168 0159. The complex is listed in the Queensland Heritage Register. For details check https://environment.ehp.qld.gov.au/heritage-register/detail/?id=600967.

* Prior to the arrival of Europeans the area was home to the Waka Waka Aboriginal people.

* The Proston leasehold was established in 1846.

* In 1910 the Queensland government opened up the land around Proston to more intensive settlement. A ballot for the land was held with 500 people (including a syndicate from England) all arriving at the Wondai Land Court hoping to be one of the future landholders.

* The town's slow growth was sped up by the arrival of the railway from Murgon in 1923.

* The South Burnett Dairy Co-operative Butter Factory was established in 1934.

* By 1939 the town had a cinema, a cottage hospital, a sawmill, a baker and an electricity generating plant.

* St Peter's Church of England was consecrated in 1940.

* A sawmill to cut railway sleepers was opened in 1950.

* The construction of Boondooma Dam (22 km west of the town) in 1980 solved the town's water problems.

There is a useful state-based information website. Check out https://www.queensland.com/en-au/destination-information/proston. 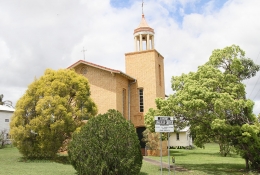 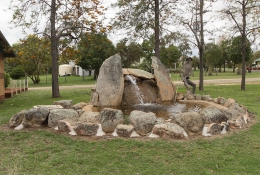 The water fountain and fisherman over the road from St Peter’s Church. 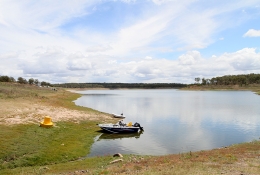 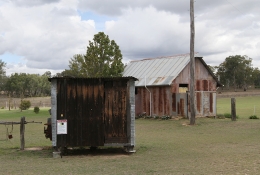 A boundary rider’s hut at the Boondooma Homestead Museum 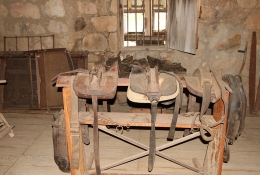 Saddles on display at the Boondooma Museum 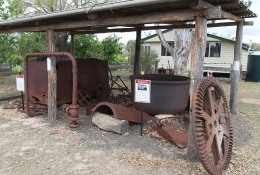 A tallow pot and water tank at the Boondooma Museum 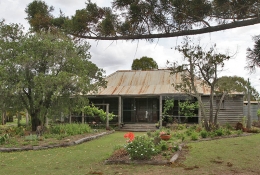