Quairading is a typical wheatbelt town with a bulk grain storage facility, railway siding, some old farm machinery in the median strip, a large old hotel (Quairading Hotel) and small number of shops servicing the surrounding farmers. The primary appeal of the town lies in the attractions - huge granite outcrops (Mount Stirling), a pink lake, nature bushwalks and a large, privately build weir and dam. It is more than just another wheatbelt town.

Quairading is located 165 km east of Perth via York. It is 249 m above sea level.

Quairading takes its name from Quairading Spring, an Aboriginal name first recorded in 1872. The meaning of this name may be related to "Quairit", an Aboriginal word for the eldest girl of a family although another source claims it is a corruption of the Aboriginal word ‘Kwirading’ meaning the "home of the bush kangaroo".

Quairading District Heritage Trail
The Quairading District Heritage Trail is a series of interpretative signs (there is a map to guide visitors to the appropriate places) which starts with a number of signs in the village of Dangin which lies 8 km west of Quairading. It is primarily a drive through the countryside visiting sites of natural and historical significance including the Toapin Weir (1912).

Information Centre & Wood Sculpture Display
Some years ago the major attraction in the area was ‘The Home of Natural Wood Sculpture’ located 22 km north-east of Quairading and founded by the late Ian Wills who had the idea of creating sculptures from unusual shapes of wood emphasising the grain and knottiness of the wood. When Wills died the exhibits of his work, which had achieved fame in the area, were moved into the Quairading Information Centre, the Old Railway Station,  which is located in the heart of town on Heal Street.

Quairading Nature Reserve
Located on the York-Quairading Road, the  Quairading Nature Reserve covers 527 ha of unique remnant vegetation and has outstanding examples of wandoo, york and salmon gum forests. The reserve is dominated by Nookaminnie Rock, a large granite outcrop with magnificent views of the surrounding landscape, which is ideal for viewing the sunsets and experiencing the local wildflowers. There is a display board at the entrance to the Reserve which shows the marked walk trails which have interpretative signage describing the flora and fauna.

Anglican Church Labyrinth
Located in Harris Sreet, the Anglican Church has an impressive Chartres 11 ring Labyrinth which was built by the local residents. Labyrinths exist around the world and are designed for contemplation as people walk around the rings.

The Lone Pine
Located in Heal Street near the town's War Memorial, the Lone Pine recalls the battle at Gallipoli and specifically at Lone Pine. A soldier, Keith McDowell, sent a pine cone back from Gallipoli  to his aunt in Warrnambool, who grew 4 seedlings from it. This tree was grown from one of those seeds. It is a Brutian Pine.

Toapin Weir
Toapin Weir, which is the largest privately constructed reservoir in Western Australia, is located 10 km north-west of the town. It was developed by local landowner Jonah Parker who appointed engineer T. C. Hodgson to design the weir to provide water for his farm, the railway and the local town of Dangin The plan was to catch the rainwater runoff from Toapin Rock and then reticulate it to the nearby farms. Constructed in 1912 it is an interesting variation of the water gathering techniques used throughout the wheatbelt. In 1935, the state received £125,000 as part of the national program of works for unemployment relief. Toapin Weir received funding to raise the Weir wall and this increased the storage capacity to 22.7 million litres, which allowed water to be pumped to the town and district of Quairading.

Pink Lake
Located 11 km east of Quairading on the Bruce Rock Road, the Pink Lake is a natural phenomenon which sees the lake turn pink at certain times of the year. One side of the lake becomes dark pink, while the other side remains a light pink colour. During summer, evaporation causes the water level to drop and salt builds up on the fences and trees. When the water returns, the salt causes the pink colour.

The No. 2 Rabbit-Proof Fence
There is a sign marking the local point of the famous Rabbit Proof Fence which is located south of Quairading on the Corrigin Road. Portions of the rabbit-proof fence can be seen in the area. It was constructed between 1901 and 1907 to keep rabbits out of farming areas and the No.1 fence ran from north to south. It was the longest unbroken fence in the world. The No. 2 Rabbit Proof Fence was started in 1904 weaving its way 724 miles (1158 km) from Point Anne through Cunderin, Yalgoo before connecting to Fence No.1 at Gum Creek. It was an incredible achievement covering 724 miles and being built in four months. It was given high priority because of the scale of the rabbit infestation.
There is fascinating signage at the section of the fence (directions are available at http://inherit.stateheritage.wa.gov.au/Public/Inventory/Details/76252e42-7711-4683-b1d3-83145d109b61) which explains the work involved, the demands of the fence, the level of the rabbit infestation and the urgency to save the surrounding lands from destruction.
There were three Rabbit Proof Fences in Western Australia and one, famously, was used as a guideline for three young Aboriginal girls in the 1930s who walked the length of the fence to make their way back to their families. To see sections of the fence, ask for directions at the Community Resource Centre and to understand its significance see Phil Noyce's 2002 film Rabbit-Proof Fence or read Doris Pilkington Garimara's book Follow the Rabbit-Proof Fence upon which the film was based.

Mount Stirling Nature Reserve
Located 35 km north-east of Quairading on the Kellerberrin Road is a large granite outcrop known as Mount Stirling which provides panoramic views over the surrounding countryside and has good picnic facilities for the visitor. The area holds great significance for Aboriginal people. The nature reserve is now part of the Granite Way, a trail which takes visitors past some of the most impressive granite rocks in the Wheatbelt. There is a useful brochure Granite Way Featuring Kwolyin Camp which can be downloaded at https://www.wheatbelttourism.com/wp-content/uploads/2012/04/GRANITE-WAY-PAMPHLET.pdf. The  trail is designed to give visitors an experience of the flora, history and geology of the area.

* Prior to the arrival of Europeans, Dangin Springs was a meeting ground for the local Balardung Aborigines. It was common for up to 800 Aborigines to camp at the springs.

* The first European settler in the area was Stephen Parker who used a selection near Dangin Springs to graze sheep.

* In 1859 Edward Parker, Stephen’s son, moved into the area to clear land.

* By 1863 Parker had a track from York to Dangin and was progressively clearing the land in the district.

* In 1872 the explorer Alexander Forrest passed through the area and recorded Quairading Spring.

* By the 1890s the government’s Homestead Act encouraged the acquisition of small plots of land.

* The Conditional Purchase scheme of 1898 encouraged farmers to take up small holdings. The farmers had to clear and fence the property they acquired.

* Around 1900 Jonah Parker (son of Edward) subdivided his property and made Dangin a private townsite.

* Dangin was gazetted in 1902 but it was totally surrounded by Parker land and residents had to enter through a gate.

* The town of Quairading came into existence in 1905 when a man named Jim Caldow opened a store in the bush.

* The tiny settlement of Quairading was gazetted in 1907.

* By 1909 the town had a hotel, general, store, two banks, blacksmith and baker.

* In 1910 Parker, who was a good teetotal Methodist, established the Temperance Hotel (a non-alcoholic hotel) in Dangin.

* The railway from Quairading to Bruce Rock was closed in the 1970s.

* In 2009 Quairading experienced an earthquake which measured 3.2 on the Richter scale.

* In 2012 Toapin Weir was listed on the State Heritage Register.

* In 2013 the railway from York to Quairading was closed down.

There is an official website for the local council. Check out http://www.visitquairading.com.au. 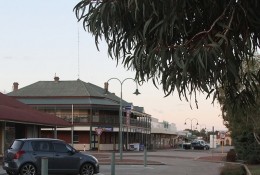 The main street of Quairading 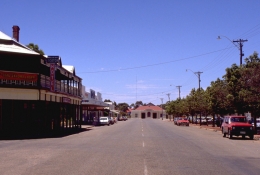 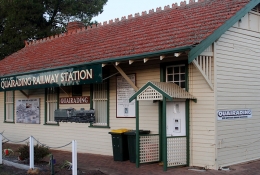 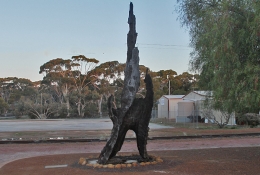 A piece of natural wood sculpture near the Railway Station 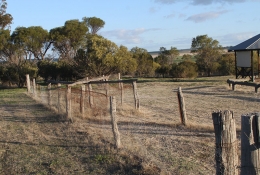 The No.2 Rabbit Proof Fence near Quairading