Can ecological vandalism on a massive scale be considered one of the wonders of the world? Probably yes, because the first time anyone sees the valley at Queenstown (and you always enter it from the hills above the town) they spontaneously gasp in amazement. Having passed through densely timbered Tasmanian wilderness they are suddenly confronted with a moonscape produced, in the space of only twenty years, by the savage cutting of the pristine forests to fuel the local copper smelters and the corrosive, deadly sulphur fumes from eleven furnaces. The heavy west coast rain (it averages around 2400 mm a year) did the rest. Erosion stripped the hills of their soil and a man-made desert was left. Yet, for all this, here is an intensely beautiful and wild area. When the grey clouds tumble in, driven by the Roaring Forties; when the hills are smudged with forbidding mists; the Queen River valley, for all its damage, is unforgettable. It really is one of the wonders of the world while, at the same time, being a reminder of our capacity as a species to destroy and pollute the planet. But be quick: nature has an endless capacity for renewal and current reports are that the trees are finally growing back and the moonscape will be returned to Tasmanian wilderness within our lifetime.

Queenstown is located 260 km north-west of Hobart on the Lyell Highway, 164 km km south of Burnie via the Ridgley and Murchison Highways, and 259 km south-west of Launceston.

There is some debate about the origin of the name. Historically the settlement was known as Queen Crossing (almost certainly a reference to the crossing of the Queen River) and it was changed to Queenstown on 31 August, 1895. The other, rather obvious, interpretation is that it was named because it came into existence in the latter years of the reign of Queen Victoria and the name honours her position as British monarch.

West Coast Wilderness Railway
It was always a slightly crazy idea. Trying to build a railway through rainforest and rugged terrain from Queenstown to the coast verged on the insane but, in 1893, in an attempt to convince investors in London, the directors of the Mount Lyell Mining Company changed their name to the Mount Lyell Mining and Railway Company and planned a railway to the sea. The route of the track was to follow the King River for about 7 km, then, at a gradient of 1 in 20, it would climb around the side of the gorge for 5 km before dropping at a gradient of 1 in 15 for about 4 km and then proceeding to the coast at Teepookana. The Parks Tasmania website explains: "The German-patented Abt railway system was selected as the best alternative to overcome the difficult terrain of the King River Valley. A central cog on the engine engaged the teeth of a third rail known as the ‘rack’ which was positioned midway between the two outside rails. This allowed locomotives to haul loads over sections two and a half times steeper than was possible for conventional lines."
In 1894 a total of 400 men started work on the railway and by 1896 34 km of track had been laid. During the construction cuttings, many of them 20 m deep, had been dug out with pick and shovel; 48 wooden trestle bridges had been built; and the men had worked for six shillings and six pence for an eight hour day. In 1899 the track was extended to Regatta Point, the southern point of Risby Cove at Strahan. The railway continued to operate until 1963. Lobbying from local businesses, who claimed it was an iconic part of western Tasmanian history, saw the Federal Government pour over $20 million into restoring the railway which started operating as a tourist attraction in 2002. It runs from Queenstown to Regatta Point, Strahan and departs Queenstown at 9.00 am every morning. The steam trains used are either the Abt 1 (1896), Abt 3 (1898) or Abt 5 (1938). For more details, bookings and information check out http://www.wcwr.com.au and for a detailed history of the railway check out http://www.parks.tas.gov.au/file.aspx?id=7044. Tel: (03) 6471 0100.

Empire Hotel
A reminder of the affluence of the town when the mines were fully operational, the Empire Hotel, at 2 Orr Street, was once one of fourteen hotels serving the mining community. It was opened in 1901 and still boasts an impressive, handmade Tasmanian blackwood staircase. Check out www.empirehotel.net.au

Galley Museum
The Galley Museum is located in Queenstown's first brick hotel, the elegant Imperial (1898) on the corner of Driffield and Sticht Streets. It was a hotel for twenty years before becoming a hospital and then accommodation for men working at Mt Lyell. In the 1970s it became the Galley Museum. The museum was established by Eric Thomas who spread his remarkable photo collection through seven rooms. There are over 800 photographs, all have been collected by Mr Thomas and all record the history of Tasmania's West Coast. Each photograph is accompanied by a detailed caption recording the history of the image. Tel: (03) 6471 1483.

The Gravel Football Oval
They play Australian Rules Football in western Tasmania and as a study is sheer, foolhardy "hard man" bravery to play a game on Queenstown's gravel oval has got to be the height of stupidity or a crazy brave preparedness to come off grazed and bleeding. It is claimed the oval was created because a grass oval, given the area's huge rainfall, would have always been nothing more than mud. With mud you slip and slide, with gravel you just get flesh ripped off you. Not surprisingly it has terrified visiting teams for nearly a century. It is located off Wilsdon Street which runs off the Lyell Highway.

Spion Kop Lookout
Turn south just beyond the West Coaster Motel on the Lyell Highway and turn left again into Latrobe Street and you will reach Spion Kop Lookout which offers an excellent view across the town.

Views of the Valley
The valley with all its devastation is one of the town's key attractions. There has even been debate about whether reafforestation would damage the town's moonscape tourist appeal. The best vantage points are on the Queenstown-Hobart road above the town. It offers excellent vistas over the entire valley.

Gormanston
Gormanston is located 6 km from Queenstown on the Lyell Highway to Strahan. In 1901 it had a population of 1,760. Today there are about ten families still living in this historic mining town. It was established in 1881 and grew rapidly with the discovery of gold at Iron Blow. In 1884 the first post office on Tasmania's west coast was built at Gormanston and by 1897 it was the base for North Lyell Copper Co.

Iron Blow and Linda
Linda, now a ghost town, is located 8 km east of Queenstown. Its last hotel, the Royal, closed in 1952 and it is now a reminder of how, particularly with mining, when a town outlives its usefulness, people simply depart. There is a particularly impressive lookout at Iron Blow.

Lake Margaret Power Station
Located on the Yolande River 10 km north of Queenstown, the Lake Margaret Power Station is now the oldest operating hydro-electric scheme in Australia and is listed on the Tasmanian Heritage Register. It was built in 1914 by the Mt Lyell Mining and Railway Company to power the Mt Lyell copper mine and it still contains machinery from that period. It was taken over by Hydro Tasmania in 1985 and decommissioned in 2006 due to safety concerns and the need to maintain the 2.2 km King Billy Pine low pressure pipeline. In 2008 Hydro Tasmania started to redevelop the site as part of a larger cultural heritage program. It is planned to open the power station to tours. There is detailed information about the Power Station and its future at http://www.hydro.com.au/cold-wet-hard

* The surveyor and explorer, Charles Gould, came through the area in the 1860s but it was known as dangerous and difficult country and no settlement followed.

* In 1881 Cornelius Lynch found gold near Queen River and prospectors and miners began to move into the area.

* In 1883 three miners - Bill and Mick McDonough and Steve Karlson - discovered the rocky outcrop known as Iron Blow which drew more miners to the area.

* By 1888 the Mount Lyell Gold Mining Co. had been formed and was operating out of Penghana. The gold in the area required crushing and so by 1889 there was an eight stamp battery operating but two years later the gold had been exhausted.

* In the early 1890s the Mount Lyell Mining Co was formed and the first smelters, created by an American metallurgist Robert Carl Sticht, were in operation by 1895.

* In 1895 the town attached to Mount Lyell became known as Queenstown.

* In 1896 Queenstown was surveyed, the post office, a hotel and a general store all opened.

* Between 1896-1923 3 million tonnes of timber were cut down to fuel the town's eleven furnaces. Sulphur fumes from the copper furnaces killed the surrounding plants and trees. It was estimated that the furnaces were consuming 2,040 tonnes of timber each week. By 1900 the valley had been totally denuded.

* By 1903 the Mount Lyell and North Lyell mining companies had combined.

* In 1914 a hydro-electric scheme was completed at Lake Margaret.

* The first road (prior to that all traffic had been by sea from Macquarie Harbour) to Hobart was opened in 1932.

* Mount Lyell Mines continued to operate the mine until 1972 when they were taken over by the Renison Goldfields Consolidated Ltd.

There is no official visitor information centre in Queenstown. The closest is the Strahan Visitor Centre which is located on the wharf near the Huon Pine Sawmill, tel: (03) 6471 7488.

There is an independently owned and operated (if slightly dated) site devoted to Queenstown at http://www.queenstowntasmania.com and http://www.westernwilderness.com.au/queenstown_tasmania is a useful site with good suggestions for activities in the area. 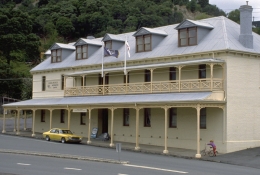 The Galley Museum, once the Imperial Hotel (1898) 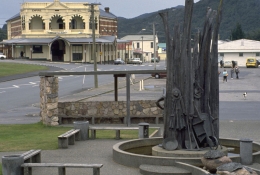 The Empire Hotel (1901) and the Pioneer Memorial in Queenstown 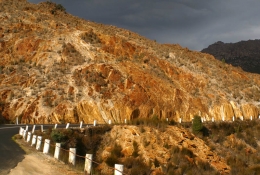 Barren rock faces line the sides of the road down into the Queenstown valley. 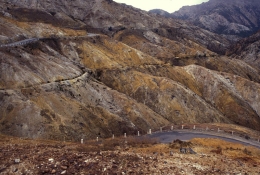 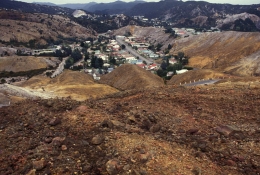 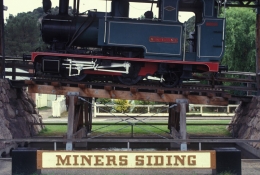 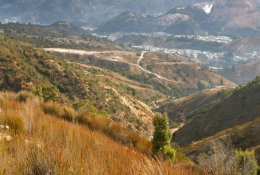 Queenstown in 2004. The hills are slowly starting to be reafforested.