Quilpie is the administrative centre of a shire which covers 67,663 sq. km on western Queensland.  In the 21st century the shire's population fell below 1,000 people with approximately half of those living in the town. Beyond the town and the tiny settlements of  Toompine and Eromanga lie the deserts and marginal lands of western Queensland with their endless sand dunes, scrubby mulga and gidgee vegetation, dirt roads heavy with bulldust, annual rainfall of less than 350 mm and summer temperatures which have been known to reach 47°C (116.8°F). The primary attraction of the area is fossicking for the beautiful boulder opals. A bonus is that the altar in the local church has, uniquely, been made from these valuable stones.

The town's name is taken from a Margany Aboriginal word for the largely nocturnal bird, the "stone curlew".

The Church Altar
Quilpie's major attraction is the altar in St Finbarr's, the Roman Catholic Church on Buln Buln Street. In keeping with the mining background of the area the altar has been made out of opal rocks. It is unique and well worth a visit. The story, as told on the town's website, is that  "In 1976, the priest at the time, Father John Ryan, decided to complement the opal mining background of the area by commissioning local miner, Des Burton, to install a border of opal around the carving of Our Lady of Perpetual Succour. Instead, Des offered the Priest ‘a bit on the wall’. This turned out to be almost an entire wall, which is now installed on St Finbarr’s altar, lectern and baptismal font.
"Des Burton, the father of the boulder opal industry, is largely responsible for putting Queensland boulder opals on the world stage. He was a chemist with a pharmacy in Quilpie and spent many years mining opal and opening up the market worldwide. By the 1980s, Des had opened several retailing outlets including Quilpie Opals in Brisbane’s Queen Street Mall.
"Bill Durack was part of a Toowoomba firm of architects which designed Quilpie’s St Finbarr’s Church.  Bill and his sister Mary Durack, author of Kings in Grass Castles, donated the beautiful coloured glass windows in the western side of the church, in memory of their famous ancestors."

Visitor Information Centre, Museum and Gallery
The local Visitor Information Centre incorporates an interactive museum which displays the early history of the district as well as displays on opal mining and information about native flora and fauna. Next to the centre is a park which features wrought iron tables and chairs hand crafted by a local artist using the rims of old wagon wheels.  The table tops are boulder opal mosaics inlaid with glass tile images and there is a 45 metre mural painted by a local artist which depicts sections of the Shire's proud history. There is also a Guided Town Tour which runs twice a week from April – September. For more information check out http://visitquilpieshire.com/?page_id=200.

Quilpie Shire Military History Museum
Located next door to the Visitor Information Centre, the Military History Museum is a collection of local memorabilia recording the role played by local people in the country's military history. There are extensive collections of photographs and memorabilia. Check out https://www.outbackqueensland.com.au/attractions/quilpie-shire-military-history-museum/ for more details.

Opal Fossicking
The Quilpie district is known for its opals and is one of the world's leading providers of boulder opals. Boulder opals are recognised as being particularly beautiful as they are backed by ironstone. There are two major fossicking sites near the town:
(a) two kilometres west of the town the Shire Council has established a fossicking area where visitors are permitted to fossick without a permit
(b) 60 km south east of Toompine is a designated fossicking area known as Duck Creek and Sheep Station Creek. You need a mining licence which can be obtained from the Quilpie Mining Register. The area has been successfully mined since the 1880s.

The Lake
Located 6 km east of Quilpie via the Diamantina Development Road, The Lake (more correctly known as Lake Houdraman) is a natural lake on the floodplain of the Bulloo River. If offers a range of accommodation options. The website explains: "The lake itself is a beautiful natural expanse of water set amongst shady gum trees. Seasonally, thousands of glorious water lilies line the banks in the shallow water. This lush oasis is home to a vast array of birds and native animals, making it an ideal location to birdwatch and photograph some of Quilpie Shire’s unique wildlife. Only a ten-minute drive from Quilpie, the Lake is an ideal spot for a scenic picnic, a refreshing swim, or to watch a magnificent sunset. Visiting this beautiful, natural lake teeming with native birds makes it difficult to believe this is outback Queensland." For more information tel: 0418 947 955 or check out https://www.thelakequilpie.com.

Outback Mail Run
A unique tourist experience can be had by joining the local mailman as he delivers Australia Post letters and parcels as well as local freight to people who live off the beaten track.  The Outback Mail Run has stops at 10 remote Channel Country properties and covers nearly 400 km, twice a week.  It is possible to book a spot on the Outback Mail Run. Check out http://www.outbackmailrun.com/Price--Tour-Info-and-Bookings.html or tel: 1300 858 867.

Toompine
Toompine lies 74 km to the south. It was once a stopping point for Cobb & Co and the centre of a thriving mining community. Today it is nothing more than a solitary pub, the Toompine Hotel, which was built in 1898 to meet the demands of the area. 60 km south east of Toompine is a designated fossicking area known as Duck Creek and Sheep Station Creek. You need a mining licence which can be obtained from the Quilpie Mining Register. The area has been successfully mined since the 1880s.

Eromanga
Eromanga is located 103 km to the west of Quilpie. It is now little more than a pub (the Old Royal Hotel built in 1885 and used as a Cobb & Co staging post) and a police station but, in recent times, it has become a significant oil producer and the location of some particularly important dinosaur finds. The town claims to be one of the oldest opal mining areas in Queensland and wears as a badge of honour the fact that it is "the town furthest from the sea in Australia". In recent times Eromanga has been producing 1.5 million barrels of oil per year.

Eromanga Natural History Museum
In 2004 a property near Eromanga became the site of palaeontological discoveries of Australia’s largest dinosaurs. Several dinosaurs, dating back 95-98 million years, were unearthed including one named George, another named Cooper (the largest dinosaur found in Australia), Zac (one of the most complete dinosaurs unearthed in Australia) and Sid which was named after the famous pastoralist, Sir Sidney Kidman. Today there are over 80 dinosaur and megafauna sites in the area. Check out http://www.enhm.com.au for details. In 2019 the museum will be open from 9.00 am - 5.00 pm from the 2 April to 12 October seven days a week. The highlight of any visit is the one hour, hands on, guided tours which usually occur at 9.00 am, 11.00 am, 1.00 pm and 3.00 pm. It is also possible to join digs and, under the supervision of experts, learn about fossil excavation and preservation. Tel: (07) 4656 3084.

Knot-A-Saurus Park
The Knot-A-Saurus Park features a sculpture of a Sauropod and her two babies made out of 100 metre lengths of twisted aluminium. This impressive and unusual sculpture is located on the southern side of Eromanga. It was originally designed by Cameron Searl and located in Brisbane for the 2014 G20 summit. The three sculptures were subsequently donated to the Outback Gondwana Foundation which administers the Eromanga Natural History Museum. For more information check out https://www.outbackqueensland.com.au/attractions/eromanga-knot-a-saurus-park.

Ray Station
About 75 minutes north of the town, on a predominantly dirt road, is the historic 'Ray' station which offers accommodation for tour groups. Originally owned by the pioneers of the district - the Tully and Durack (as in the famous Patsy Durack of Kimberley fame) families - it is a working sheep station run by Mark and Sandra Tully. The Tullys offer shearing shed accommodation and trips around the property to groups who are treated to their unique brand of western Queensland hospitality. For more information tel: (07) 4656 4737.

Hell Hole Gorge
Located 185 km (it is nearly a 7 hour drive by 4WD) north of Quilpie, Hell Hole Gorge National Park is scenically spectacular and is known for its exceptional bird watching opportunities, its hiking, 4WD driving and camping. There are camping locations at Hell Hole Waterhole, and Spencers Waterhole offers dramatic views down the Spencer Creek. The Department of Environment and Science website notes the appeal of the area as: "Rugged gorges rimmed by cliff faces at the edge of stony tablelands lead to open, gently undulating plains. Wildflowers blossom in stunning seasonal displays after rain." For more information check out https://parks.des.qld.gov.au/parks/hell-hole-gorge which has downloadable maps and visitor information.

* Prior to the arrival of Europe and the area around Quilpie was occupied by the Margany Aboriginal people.

* Graziers began taking up land in the area in the 1860s.

* By the 1880s fossickers were in the area extracting the rich and beautiful boulder opals.

* Quilpie was gazetted as a town in 1917 with the arrival of the railway.

* In 1933 the town started to received water from the Great Artesian Basin.

* By 1952 the hot water from the town bore was being used to generate electricity.

There is an outstanding and useful local website - http://visitquilpieshire.com - which has information about where to stay and where to eat. 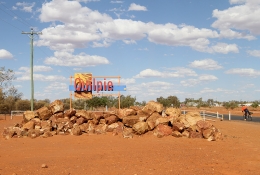 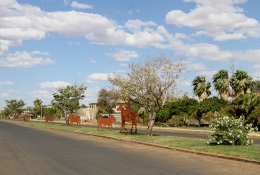 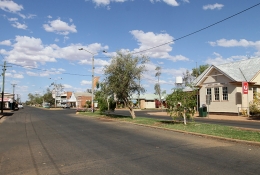 The post office and the main street of Quilpie 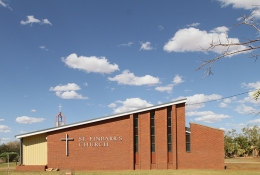 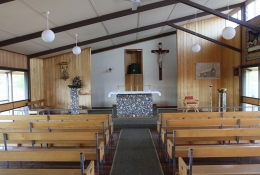 The interior of St Finbar’s - with the opal font, altar and lectern 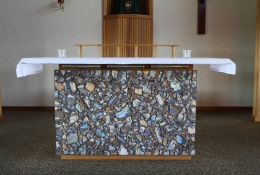 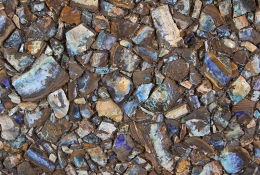 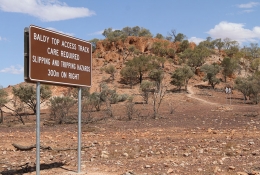 The walk to the top of Baldy Top 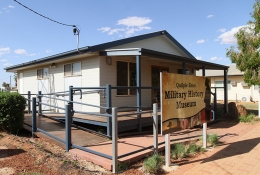