Rainbow Beach is a town in transition. It was once a quiet and idyllic holiday, fishing and retirement getaway but, in recent years, the holiday developers have moved in and the boast that it is an 'eco-tourism' destination has had to take in multi-storey beachside apartments and a feeling that it is rapidly becoming upmarket and fashionable. It still promotes itself as the 'Gateway to Fraser Island' (more correctly 'The Southern Gateway to Fraser Island) as there is a regular and reliable barge which makes the crossing from the far northern end of Inskip Point.

Rainbow Beach is located on the coast 240km north of Brisbane via the Bruce Highway and Tin Can Bay Road.

Rainbow Beach was originally known as Back Beach. Many authorities suggest that it was renamed after the coloured sands near the town. However there is a school of thought that argues the town was named after the HMS Rainbow.

Coloured Sands
The entire area is covered in sand and this results in spectacular dunes and dramatically beautiful coloured sands which have probably been forming since the last ice age. All the visitor has to do is park near the Surf Club, walk down the steps, and head north for about two kilometres before they reach cliffs, some up to 200 metres in height, of coloured sand. The power of oceanic erosion has exposed up to 72 different coloured sands which are the result of leached vegetable dies or deposits of iron oxide. There is a local Aboriginal legend which explains the colour of the sands as a result of a spirit which took the form of a rainbow and which, after a fight over a beautiful woman, fell onto the cliffs.

The walk to see the cliffs is best achieved at low tide although it is possible at high tide. There is also both walking and 4WD access off Inskip Point Road at Pacific Boulevard.

Inskip Point Recreation Area
There are two good reasons for driving to the end of Inskip Point. (1) you want to take your 4WD across to Fraser Island on the barge and (2) you want to explore the interesting flora and fauna of the point. Access from Rainbow Beach town centre is via Clarkson Drive and Inskip Point Road. It is a 12-km narrow sandy peninsula which ensures calm waters in Tin Can Inlet and the Great Sandy Strait. The flora of the area consists of coastal trees, such as cypress pine and casuarina, and coastal shrubs which provide habitat for a range of birds. There is good signage to help visitors identify the fauna and flora with notices including "During summer, numbers of shorebirds in the Great Sandy Strait can swell to 30,000 when migratory birds join resident birds ... for migratory shorebirds, its a marathon journey. Many birds travel over 25,000 km each year, with some larger species flying more than 6,000 km non-stop." Among the long distance visitors are the bar-tailed godwit, the grey-tailed tattler, and the red-necked stint. Not surprisingly the water around Inskip Point are rich in sea life and turtles, dugongs and dolphins are regularly sighted.

Carlo Sandblow
The 15ha Carlo Sandblow was named in 1770 by Captain Cook who, observing it, decided to name it after one of his deck crew named Carlo. It offers excellent views east to Double Island Point and west to Tin Can Bay. Whales can sometimes be seen offshore in June and through August to October. There is an easy and well-maintained 600-metre walking track (15 minutes each way) through the bush which starts at the Rainbow Beach water tower (the route is clearly sign posted from the town centre) and passes through woodland to a viewing platform above the 'blow'. Carlo Sand Blow is popular for both hang-gliding and para sailing. They use the gentle slope of the 'blow'  to launch out over Wide Bay.

Cooloola National Park
Lying to the south of Rainbow Beach and stretching for about 60 km down the coast to to Noosa Heads is Cooloola National Park (56 600 ha) which forms the southern portion of Great Sandy National Park. It is a superb stretch of peaceful coastal countryside which lies immediately to the north of the Sunshine Coast, one of the most densely populated areas on the Queensland coast.

Cooloola National Park (Bushwalks)
Cooloola offers many bush walking opportunities which are best enjoyed when the wildflowers bloom in the spring. Walking leaflets are available and a brochure can be downloaded at http://www.nprsr.qld.gov.au/parks/cooloola/pdf/visitorguide-cooloola.pdf.

There are many different tracks. Signs at the beginning of each walk indicate the distance. The longest walk is the Cooloola Great Walk (check http://www.nprsr.qld.gov.au/parks/great-walks-cooloola for details and requirements) (102 km one way) which joins Carlo Entrance at Rainbow Beach to Noosa North Shore in the south. It takes in a number of bush camping areas ranging from those with no facilities to sophisticated camping sites like Harry's Camp near Lake Coolola. The National Parks estimate that the entire walk takes five days although it can be extended or shortened. It can be enjoyed any time from April to November. Sections are often flooded in the summer and early autumn so check on conditions before departure.

Three walks begin from the Elanda Point car park and canoe launch. The Elanda Circuit (5.1 km) takes in melaleuca and casuarina forests with a 400-metre detour to Mill Point to see the remnants of a milling settlement which existed from 1862-1892.

(2) The Kinaba Track (6.1 km one way) which starts at Elanda Point and passes through grasslands and cabbage palm and paperbark wetlands.

(3) Melaleuca circuit at Fig Tree Point - a 500-metre walk along a wetlands boardwalk through cabbage palm and paperbark wetlands.

Check out Tin Can Bay for more activities in the immediate area.

* The earliest inhabitants, the local Aborigines, were camping on Inskip Point, which they called Carah, up to 10,000 years ago.

* On 18 May, 1770 Captain Cook sailed past and named both Carlo Sand Blow and Double Island Point.

* The first Europeans to settle in the area in the early 1900s when timber cutters. There numbers were sufficient for a school to be established for their children. The need to ship the timber to Maryborough resulted in a lighthouse being built at Double Island Point and lighthouse keeper being employed to keep watch over the entrance to the Great Sandy Straits.

*  Zircon, ilmenite and rutile were mined on Inskip Point between 1965 and 1971 by Queensland Titanium Mines. They developed simple accommodation and access roads to the area.

* In 1967 a tourist ferry service was started between Tin Can Bay and the southern reaches of Fraser Island.

* Development of the area is so recent that Tin Can Bay wasn't officially gazetted until 1969 and that was only because of the local sand mining industry. It was around that time that the government built a road to Rainbow Beach.

* Sand mining in the area was relatively short-lived. It ceased in 1976.

There is a useful website - http://www.rainbowbeachinfo.com.au/ - which specialises in providing information about tours and the highlights of the area. 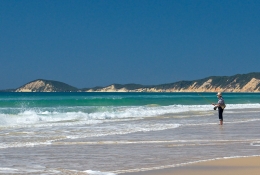 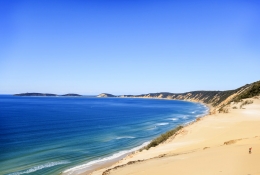 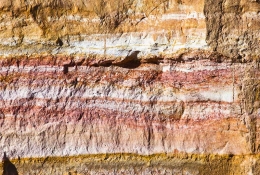 The coloured sands which give Rainbow Beach its name. (pic supplied Gympie Tourism) 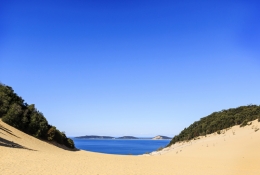 Carlo Sandblow looking across to Double Island Point where some of the most perfect waves on the coast of Queensland roll in. (pic supplied Gympie Tourism) 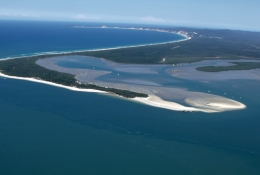 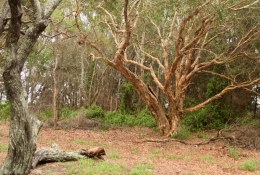 The pleasant walk through the foreshore bushland at Inskip Point. 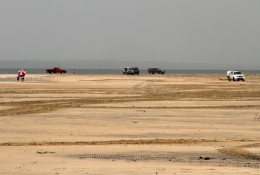 Waiting for the barge across to Fraser Island at Inskip Point.