Small rural service town known as the "Gateway to the Mallee"

Rainbow is a small town at the southern edge of the Victorian Mallee. It is edged by both productive grain lands and the wilderness areas of Victoria's western deserts. The town's main attractions are the historic Yurunga Homestead; Pella with its unusual St Johns Lutheran Church; and the desert lakes - Lake Hindmarsh and Lake Albacutya - and the vast desert parks which surround them.

Rainbow is located 405 km north-west of Melbourne via Ballarat and Horsham.

Rainbow was named after a property in the area called "Rainbow Rise" which, in turn, had been named because it was located near a crescent-shaped ridge which in spring was ablaze with multicoloured wildflowers.

Yurunga Homestead
Yurunga Homestead is an elegant, typically rural, Edwardian home made of brick and limestone with an elaborate cast-iron veranda, brick trimming, pressed-steel ceilings and a special room under the house for use in heat waves. It now displays numerous antiques and historic fittings. It is located on the corner of Cust and Gray Streets at the northern edge of town and is open for inspection on Sundays between 2.00 pm and 4.00 pm or by appointment. For more information tel: (03) 5395 1044 or (03) 5395 1233.

Rainbow Archive and Historical Society
Located in the old Masonic Lodge Hall in King Street, the Rainbow Archive has a wide range of local historical documents, records and photographs for display and research. Records date from district's European establishment in 1893 to the present. The collection is only open by appointment, tel: Diane Wall (03) 5395 1416.

Rainbow Murals
The town has a total of 23 impressive murals, 16 of which are located in Federal Street. There is a downloadable brochure. Check out http://www.wimmeramalleetourism.com.au/images/TownImages/Rainbow%20Murals.pdf which provides detailed descriptions of each of the murals, information about the artists and a map indicating where each of the murals is located.

Pella and St John's Lutheran Church
Located 12 km west of Rainbow is Pella and the St John's Lutheran Church. Surrounded by wheatfields the church was made of locally mined sandstone by local tradesmen in 1901. Inside is a beautifully restored pipe organ. The church is a reminder that the area was settled by German migrants who moved from South Australia and whose descendants still attend the church. Nearby are the manse and a Lutheran Primary School which contains a display of historic memorabilia. For more information contact Mark Heinrich on 0427 951 146.

Lake Hindmarsh
The road from Rainbow to Jeparit heads south-west for 15 km before looping around Lake Hindmarsh, a seasonal lake which floods periodically. The first white man in the area was Edward Eyre who camped here in 1838 while exploring an overland route from Melbourne to Adelaide. He named the lake after Sir John Hindmarsh, Governor of South Australia. It is recognised as the largest freshwater lake in Victoria (it covers 13,500 ha), and is known as a haven for waterbirds and a home to permanent and visiting birds including white-breasted sea- eagles, swans, ducks, terns, spoonbills, terns and colonies of pelicans. River Red Gums and the Three-nerve Wattle fringe the lake and lead into the adjoining Birdcage Flora and Fauna Reserve where Black Box, Yellow Gum and native Slender Cypress pine provide food and shelter to wrens, honeyeaters, robins, parrots, and species such as the Bush Thick-knee (Curlew) and Gilbert’s Whistler. Before reached Outlet Creek and the camping site known as The Wattles there is the Pioneer's Gravesite (clearly marked on the map on the Visitor Guide) of John Coppock who, in 1846, became the first European settler in the area. The headstone reads: "1865. John Coppock. An honest man". Return to the main sealed road around the lake and you will reach, progressively, Williamson's Beach on the north-western shore; Schulze's Beach which also has a boat ramp as well as camping and toilets which lies on the western shore; and, at the southern shoreline, Four Mile Beach which is a popular spot for fishing, swimming, boating and water skiing. There are camping facilities, a boat ramp and hot showers. Picnic Point beach and a water skiing club can be found on the south-eastern shore where Williamson's Beach is located. There is an excellent map and useful notes on the Lake Hindmarsh Lake Reserve which can be downloaded at http://parkweb.vic.gov.au/__data/assets/pdf_file/0005/313826/Park-note-Lake-Hindmarsh-Lake-Reserve.pdf. It also provides some information on Birdcage Reserve.

Birdcage Reserve
At the north-western end of the lake, the road from Rainbow to Jeparit separates the lagoon from Birdcage Flora and Fauna Reserve which was named because of the large number of Mallee birds which live on the reserve's floodplain and in the Big Desert. Birdcage Flora and Fauna Reserve where Black Box, Yellow Gum and native Slender Cypress pine provide food and shelter to wrens, honeyeaters, robins, parrots, and species such as the Bush Thick-knee (Curlew) and Gilbert’s Whistler.

Lake Albacutya Park
Lake Albacutya, which covers 5,840 ha, lies 15 km north of Rainbow and generally fills and empties in a 20-year cycle. It was last full in 1975 and held water for nine years. The source is the Wimmera River which fills Lake Hindmarsh and the water is then conveyed via Outlet Creek to Lake Albacutya. When full, it is a popular boating, fishing, yabbying and swimming spot. At other times, camping, 4WD exploration, walking and nature studies can be pursued. The total area of the park, including the lake, is 8,300 ha. 'Albacutya' is said to mean "where the quandongs grow". This is a reference to a tree found here which bears a sweet fruit eaten by Aborigines and early European settlers alike. The wood was used for cabinet-making. The lake is also known for its Red Gum and Black Box woodlands which attract a variety of colourful parrots such as Red-rumped and Regent parrots, as well as Sulphur-crested and Major Mitchell cockatoos. The park also includes vegetation communities including Pine-Buloke woodland, mallee eucalypts and heathlands containing Guinea flowers, Desert Banksia, Tea-tree and She-oaks. When in flood the lake is one of Australia’s significant wetlands, recognised under the Ramsar Convention for protection of wetlands. It has been known to attract waterbirds such as Banded Stilts, the rare Freckled Duck and the majestic White-bellied Sea Eagle. Emus and Western Grey Kangaroos are frequently observed. The lake lies 14 km north of Rainbow on the Hopetoun Road. The route is well signposted all the way and is designed for a 2WD. However, to explore the remainder of the western shore you will need a 4WD. There are a number of unsealed roads (even ones across the lake in times when there is no water) and the road to Yaapeet Beach on the eastern shore is unsealed but manageable in a 2WD unless it is wet.

Wyperfeld National Park
Wyperfeld National Park, which currently covers 357,017 ha, is one of Victoria's largest national parks. It covers three distinct landscapes - the Big Desert country which lies in the west of the park; the Mallee which lies to the east; and the sand dunes and floodplains which lie to the north. Historically it was a shallow sea 25 million years ago. The park contains a series of lakes which are linked by Outlet Creek, though they are usually dry, filling only when the Wimmera River floods, which is about once every twenty years. It fills Lake Albacutya which overflows into Outlet Creek. European settlers moved into the area in 1847. The first reserve was established in 1909 and as a result of lobbying by naturalists the park was declared in 1921. The park is known for its fauna and flora. It is home to kangaroos, emus and birds which survive in the semi-arid landscapes of sand dunes and spinifex, mallee scrub, heathlands and native pine woodlands of river red gum and blackbox. The southern section can be accessed by heading due north from Rainbow, past Lake Albacutya on the Rainbow-Wyperfeld Park Road. There is a Park Entrance and the road leads to the Wonga Camping Area where there are camping and picnic facilities, fireplaces, toilets, a visitors' centre, three self-guided interpretative walks and access to the James Barrett Nature Drive. Those entering the park in 4WD vehicles can gain access to Milmed Rock, Chinamans Well and North Callitris Track. There is also the acclaimed Mallee Drive - check out http://www.fwdvictoria.org.au/iconic4wd/mallee.html which has a downloadable map, track notes and information about the track conditions.

Eastern Lookout Nature Tour
There is a detailed, downloadable brochure - check out http://parkweb.vic.gov.au/__data/assets/pdf_file/0007/315826/Park-note-Wyperfeld-NP-Eastern-Lookout-Nature-Walk.pdf - which provides detailed information on the 15-km Eastern Lookout Nature Drive which is suitable for a 2WD. It includes details on the 25 minute return Eastern Lookout Walk which offers views over stands of Black Box, Red Gum, Native cypress pine woodland and Mallee woodland. The walk also passes through country occupied by Wedge-tailed eagles, black-shouldered kites and nankeen kestrels. The rest of the drive includes lines of Red River Gums; Lake Brimin which has not held water since 1921; stands of Porcupine Grass and Mallee eucalypts; and, inevitably, kangaroos and emus. It is an ideal opportunity for those interested in fauna and flora to study the uniqueness of the Mallee. The brochure explains the special importance of the plants and animals. For further information there is a useful and downloadable brochure. Check out http://parkweb.vic.gov.au/__data/assets/pdf_file/0006/315825/Park-note-Wyperfeld-National-Park.pdf.

* Prior to the arrival of Europeans the area was occupied by the Wotjobaluk Aboriginal people.

* Edward Eyre reached Lake Hindmarsh in 1838 during his exploration of a route from Melbourne to Adelaide.

* The first land grant in the area was 'Halbacutya' station, established by John Coppock in 1846. It stretched from Lake Hindmarsh to the northern end of Lake Albacutya. Coppock lived at the north-eastern corner of the lake until a dispute with Robert von Stieglitz of the 'Pine Hill' run forced him to move his residence to Lake Albacutya.

* A rabbit plague effectively destroyed the station in the late 1870s.

* Closer settlement of the area began when the property was subdivided in the late 1880s.

* The land for the town was surveyed and subdivided in 1893.

* A railhead was established at Rainbow in 1900 and a town grew up around the railway. It was named 'Rainbow Rise' which had been the name of a property located on a crescent-shaped ridge where wildflowers grew.

* By the early 20th century the dense mallee scrub in the area had been cleared.

* By 1911 Rainbow was known as the "Metropolis of the Mallee" with a newspaper, hospital, timber merchant, hardware store, department stores and churches.

There is a useful local website. Check out http://www.rainbowvic.com.au. 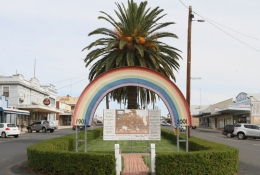 The garden in the centre of the main street. 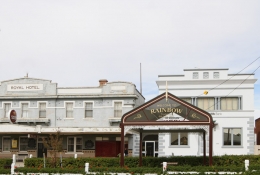 The broad main street, the Royal Hotel and the gazebo in the central garden. 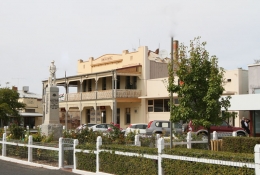 The Eureka Hotel and War Memorial in Federal Street. 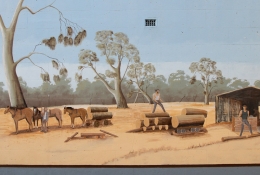 Detail of the mural "Saw Milling" in Bakery Lane of Federal Street. 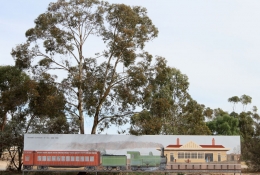 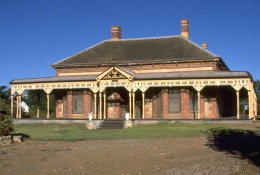 Lake Hindmarsh - with water in it. 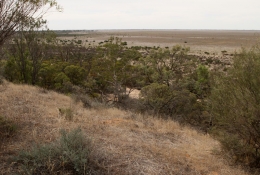 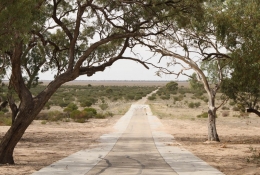 It is hard to imagine that when Lake Albacutya fills this is a boat ramp to the water's edge.