Ravenshoe is the highest town in Queensland. The temperature is typically mild, rarely exceeding 26°C, which means that it has an attraction for people wanting to escape the heat and humidity of the coast. Historically Ravenshoe was a town with a proud heritage of extracting timber from the surrounding forests. In the 1980s the town was the site of a number of major battles between environmentalists and timber workers particularly when the Federal Labor government declared a huge area of local rainforest World Heritage Listed and protected. This led to the arrival of "alternative lifestyle" people in the area (they still live outside the town) and by 1990 the town had a decidedly "hippie" ambience. Today there are remnants of the town's hippie past but it is primarily a rural service town and a tourist destination. In recent times the locals declared the town the "Beard Capital of Australia" because they felt they had the most beards per capita of any Australian town.

Ravenhoe is located 1,676 km north from Brisbane, 121 km south-west of Cairns via Gordonvale and Malanda and it is 920 m above sea-level.

In 1861-1862 Macmillan's Magazine published, in serial form, a novel by Henry Kingsley titled Ravenshoe. It is part of the mythology of the town that a copy of the novel (it was subsequently published in book form) was found by a survey party which decided to name the town - at the time it was called Cedar Creek - after the novel.

Ravenshoe Visitor Centre
Located at 24 Moore Street, the Visitor Centre, which is open seven days a week, has displays about the history and wildlife of the district.  The adjoining Nganyaji Interpretive Centre explores the rich culture of the Aboriginal Jirrbal rainforest people. There is also the Ravenshoe Heritage Gallery which has an extensive collection of historic photographs.

Ravenshoe Steam Rail Capella
Sadly, the railway is not running at the moment (2017) because three of the bridges need major repairs. The history of the railway line is complex. Construction commenced in Cairns in May 1886. By June 1891 it had reached Kuranda. "The Herberton Railway" reached Mareeba in August 1893 and Atherton in 1903. By 1910 it had reached Herberton. The line was extended to Tumoulin in 1911 and eventually to Ravenshoe in 1916. In 1988 the railway was closed down but an active local group decided to preserve a section of the historic railway. A locomotive was brought from Capella (it was named after the town) and a number of 1930s carriages were obtained. It was initially known as the Millstream Express and it first operated on 20 October, 1990. The tourist ride - which occurred every Saturday and Sunday in the winter months - was a remarkable journey. It travelled from Ravenshoe to Tumoulin, over high wooden trestle bridges, through open forest and it travelled to Tumoulin, the highest railway station in Queensland at 3165 (feet) 964.7 metres. Check http://ravenshoesteamrailway.webs.com to see if the bridges have been repaired. It is a pleasant 7 km journey on an historic railway.

Windy Hill Wind Farm
Located 6 km from Ravenshoe on the Kennedy Highway, the Windy Hill Wind Farm, built in 1999 and operational by 2000, was the first wind farm in Queensland. It has a total of 20 turbines all with a height of 44 metres and blade dimension of 22 metres. Each turbine generates 12 MW, enough to power 3,500 homes. This will reduce greenhouse gases by up to 25,000 tonnes of CO2 per year. Built by Stanwell Corp at a cost of $20 million, it has turbines which were made in Germany, they are now owned and managed by RATCH-Australia Corporation. The land around the wind farm is owned by the local farmers - consequently there are cows grazing below the wind turbines. There is a car park and viewing area. At the viewing site there are a number of information panels which explain how the wind farm works.

Located 9.5 km south-west of Ravenshoe via the Kennedy Highway and Millstream Falls Road, the Big Millstream Falls plunge over the edge of a columnar basalt lava flow and are reputedly the widest single-drop waterfall in Australia. There is a 680 metre walking track (it is sealed - and, at times, steep) which leads to a viewing area over the falls. Check https://www.npsr.qld.gov.au/parks/millstream-falls/about.html for more details.

Tully Falls
The Tully Falls are located 24 km south of Ravenshoe on the Tully Falls Road which runs off the Kennedy Highway. The falls are regarded as some of the most dramatic and beautiful in north Queensland but they tend to be spectacular only after heavy rains. Still the site of the gorge, which is 295 metres deep, is impressive even when there is little water rushing over the falls. It is also possible, on the walk to the falls, to see golden bowerbirds and Lumholtz's tree kangaroos which are unique to the Wet Tropics.

Timber and the Environment
For seventy years Ravenshoe relied on timber for its economic survival. The town's sawmills produced high quality rainforest timbers for markets in Australia and overseas. Then, in 1988, 900,000 hectares, from Cooktown to Townsville became part of the nation's Wet Tropics World Heritage Area. The local timber workers in Ravenshoe were not impressed. In September 1987 the Federal Environment Minister, Graham Richardson, visited the area and that night television around the country recorded angry crowds, mostly timber workers, jostling and berating the minister. The crowds knew that Richardson was there to nominate 900,000 hectares of rainforest around Ravenshoe for World Heritage Listing. 160,000 hectares of this land had previously been set aside for timber production. The locals in Ravenshoe argued that if they were not allowed to log the rainforest then the town would die.
The arguments for World Heritage status were powerful. See https://www.npsr.qld.gov.au/world-heritage-areas/wet-tropics which explains: "the variety and beauty of the area lies mainly in the rainforests. The most varied in Australia, they contain an almost complete record of the evolution of plant life on earth, and have the highest concentration of primitive flowering plant families in the world. Almost 30 rainforest communities occur here, with many species in many layers of vegetation ... Spectacular scenery goes hand-in-hand with many rare and threatened plant and animal species, for example the southern cassowary, the spotted-tailed quoll and the musky-rat kangaroo. More than 50 animal species are unique to this area, which is home to 30 per cent of Australia's marsupial species, 25 per cent of its frogs and reptiles, and about 60 per cent of its bat and butterfly species."
The irony of the timber workers' protests was that the town of Ravenshoe did not die. 'Alternative lifestyle' people, attracted by the protests and the declarations that the area was hugely important environmentally, moved into the area and the town was given a new, and very different, lease of life.

* Prior to the arrival of Europeans the district around Ravenshoe was home to the Jirrbal Aboriginal people who spoke the Dyirbalngan language.

* In 1881 William Mazlin discovered substantial stands of cedar in the area and named the local river Cedar Creek.

* The first sawmill was built in the district in 1899 by mining entrepreneur, John Moffat.

* By 1903 the Cairns railway through Kuranda and Atherton reached Herberton.

* Cedar Creek was surveyed in 1907 and renamed Ravenshoe. A store was opened on the site.

* By 1912 the town had a provisional school and an hotel.

* In 1916 the railway from Cairns reached the town.

* In 1935-1936 the town was connected by highway to Atherton (the Evelyn Highway) and Innisfail (the Palmerston Highway).

* For most of the 20th century Ravenshoe relied on timber for its economic survival.

* In September 1987 the Federal Environment Minister Graham Richardson was jostled by angry crowds of timber workers during a visit to the area.

* In 1988 the rainforest around the town was put on the World Heritage Register.

* By the early 1990s 'alternative lifestyle' people had moved into the area.

* In 2015 a vehicle ran into a gas cylinder injuring 20 people in the Serves You Right Cafe on Griggs Street.

* Today the town is driven by tourism, beef and cattle.

The University of Queensland has a useful historical site. Check out http://queenslandplaces.com.au/ravenshoe. Also useful is the Atherton Tablelands website - https://www.athertontablelands.com.au/destination/atherton-tablelands/ravenshoe. 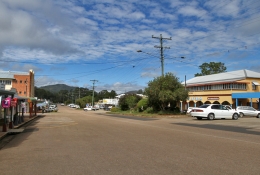 The main street of Ravenshoe 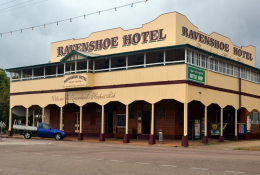 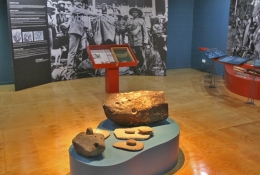 Part of the exhibition in the Nganyaji Interpretive Centre 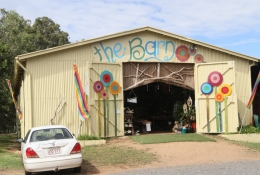 The Barn - gift and craft shops - a reminder of the town's hippie past. 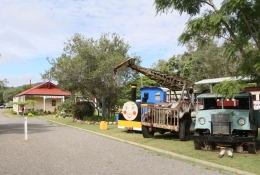 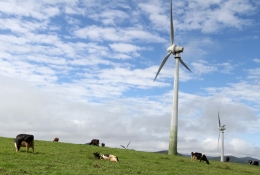 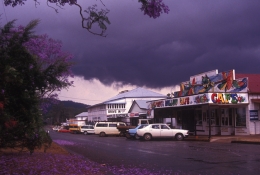 Street and jacaranda after storm, Ravenshoe (1988) 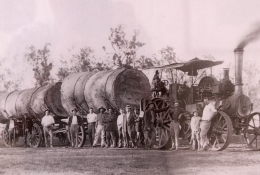 Part of the historic photographic exhibition at the Ravenshoe Visitor Centre.