Red Cliffs is a medium-sized service centre at the northern end of Victoria's Mallee region. It is located on the rich, fertile river plain of the Murray River just 13 km south of the city of Mildura. Historically it was created after World War I when returning soldiers were offered 15 acres and the tools to plant and grow vines for the production of sultanas. At the same time equipment was brought in to clear the pine, belah and mallee and one of the country's largest irrigation pumping stations was built to bring water from the Murray River to farms. Today vineyards and grape growing dominate the local agricultural economy.

Red Cliffs is located on the Calder Highway, 529 km north-west of Melbourne, 13 km south of Mildura and 67 m above sea-level.

While the name of the town is self-evident it is necessary to drive to the eastern edge of the town to see the phenomenon of 70 metre cliffs which are distinctly red.

Big Lizzie
The unusual piece of machinery in Barclay Square War Memorial Park, opposite the railway station, is known as 'Big Lizzie'. The dreadnought wheel design machine was invented by Frank Bottrill in 1906 and built at Richmond in 1914-1915. 'Lizzie' was intended to cart wool from outback stations in the Broken Hill area. Hauling two wagons (each 9.1 metres in length) the machine set off from Melbourne in 1916. It served as a home for the Bottrill family and carried its own fuel and other necessary resources.
Despite scepticism concerning its capacity to navigate the Mallee's sandhills, it reached Mildura without trouble, only to stop at the Murray River because there was no punt of sufficient size to carry her across the river. Consequently the machine was used at Merbein for carting wheat (one load being 899 bags).
When land clearing at Red Cliffs began in 1920, the Victorian Government hired the machine to uproot trees. In all, it cleared 1500 ha and made an important contribution to the conversion of the area into usable land. This mechanical workhorse was then used at Balmoral from 1925-1929 after which it was abandoned until 1971 when it was purchased by Red Cliffs, for the very modest sum of $1,250, as a memorial to the European pioneers. It was part of the Red Cliffs Golden Jubilee of 1971.
Big Lizzie is 10.7 m long, 3.4 m wide, 5.7 m high and weighs 45 tons. It was powered by a 60-horsepower, single-cylinder crude oil engine and had a carrying capacity of 80 tons. Its maximum travelling speed was about 3 km per hour and it had a turning radius of 60 metres. With its two wagons attached the whole train was 30 metres long.

German Howitzer Cannon
At the other side of Barclay Square, fronting the town's main street, is a rare Krupp 21cm Versuchsmorser Nr 3M1907 which is reputedly one of only eight that were constructed. It is said to be the only one on display anywhere in the world. Its maximum range was around 7 km with each shell weighing 119 kg. The problem was that the gun was too heavy. It weighed over 5 tonnes and had to be transported in two parts. The barrel was removed and carried on a trailer pulled by a team of horses. It was originally located at the Melbourne War Memorial but was moved from the National War Museum and unveiled on Anzac Day 1928.  For more detailed information on the gun check out http://www.landships.info/landships/artillery_articles/21cm_Morser_m10.html.

Red Cliffs Military Museum
Located in Jamieson Avenue, this museum was established in 1997 and has been growing since then as more items have been collected. Described as "The Museum has a wonderful collection of artefacts and memorabilia, from the Boer War to Vietnam, covering all Services including Women's Services, some are unique, not to be seen elsewhere, and is still growing. We also have a very extensive Library of Military related books and DVD's. Run by volunteers our museum has been described as one of the best outside of major cities." it is open on the first Sunday of each month from 10.00 am - 4.00 pm and every Friday from 9.00 am - noon  tel: (03) 5024 1499.

Historical Display
The Red Cliffs & District Historical Society operate out of the old Court House building at 24-28 Jamieson Avenue. Their museum is open on the first Sunday of the month between 11.00 am and 1.00 pm and has material relating to local history including photographs, newspaper articles, books, maps and other memorabilia.

Red Cliffs Scenic Reserve
To the east of the town along Fitzroy Avenue and Pumps Road (it is actually a circuit) is the Red Cliffs Pumping Station which was built from 1920-1923 to draw water from the Murray up over the cliffs and into irrigation channels. At the time it was the Southern Hemisphere's largest pumping station and the area was being promoted as ideal for the growing of sultanas. Before reaching the station Woomera Road heads towards Cliff Top Lookout which offers fine views over the 70 metre cliffs along the Murray River which gave the town its name. Along Woomera Road is Red Cliffs Scenic Reserve (21 ha) which preserves a remnant of the local landscape as it was before it was divided up into the soldier settlement scheme in 1920. Old middens are clear evidence of ancient Aboriginal associations with the area. There are stairways, walkways, boardwalks and information signs. Bushwalking, swimming and picnicking can all be enjoyed in the Scenic Reserve.

Red Cliffs Historical Steam Railway
Located 2 km south of the town on Millewa Road is the Red Cliffs Historical Steam Railway which was formed in 1994 by the Red Cliffs Rotary Club to operate the restored Kerr Stuart 0-4-2T steam locomotive named 'Lukee' B/N 742/1901, that had previously operated between Red Cliffs railway station and the Red Cliffs pumping station. A 1.6 kilometre section of the former 1600 millimetre gauge Red Cliffs. The Morkalla branch line has been converted to 610 millimetre gauge for tourist train operation. In 2004 Red Cliffs Historical Railway purchased an EM Baldwin diesel locomotive which was named 'Harry' the Locomotive and regularly shares running days with 'Lukee'. The railway operates on the first Sunday of the month from March to December and also on the Sundays of the Labour Day and Queens Birthday weekends and on Easter Saturday.The first run departs at 11.00 am and the last run departs at 3.30 pm. The journey takes around 25 minutes, tel: Gerard Collins on 0437 526 003. Check out http://www.redcliffshistoricalsteamrailway.org for additional information.

Relaxing on the Murray River
Boating, fishing, camping, picnicking and bushwalking can be enjoyed on the southern bank of the Murray between Karadoc (13 km east) and Colignan (36 km south-east) where red gum forest and black box woodland predominate amongst the billabongs and sandbars of the river bends. The best section is between Nangiloc (30 km south-east) and Colignan. There are emus, kangaroos, birds and wildflowers in spring.

Hattah-Kulkyne National Park
The Hattah-Kulkyne National Park is based around the Hattah Lakes system which is filled by Chalka Creek, an anabranch of the Murray River. The primary appeal of the park is the number of excellent bushwalking trails and the Hattah Nature Drive which is located close to Lake Hattah. There are also opportunities for canoeing and birdwatching with the lakes being a significant wetlands and home to pelicans, ducks, spoonbills, mallee fowl and emu wrens. There is an information centre at Hattah Lake (it provides information but it is also possible to download the Visitor Guide to the park at http://parkweb.vic.gov.au/__data/assets/pdf_file/0016/313801/Park-note-Hattah-Kulkyne-NP-and-Murray-Kulkyne-NP.pdf. The park is known for its Aboriginal middens, canoe trees and shield trees are evidence of Aboriginal occupation. There are kangaroos, goannas and over 200 species of birds, where, apart from the birds around the lakes, there are also emus, mallee fowl, miners and white-winged choughs away from the lakes. River red gums are plentiful around the waterways while black box woodlands predominate on drier land. Cypress pine and buloke inhabit the sandy plains while mallee eucalypts flourish on the higher sandy ridges. Access is via the township of Hattah on the Calder Highway, 34 km north of Ouyen. From Hattah, head east on the Hattah-Robinvale Rd. After 4 km there is a signposted left turn onto the 2WD gravel track which leads to the Lake Hattah with its campground and information centre. The Hattah Nature Walk starts from the roadside (clearly marked) about 200 metres inside the park (notify a ranger if you intend a longer hike as temperatures in the park can be extreme and be sure you have a map and compass). There is also the self-guided Hattah Nature Drive on the eastern edge of  Lake Hattah and along the shore of Lake Bulla.

Yarrara Flora and Fauna Reserve
Located 73 km west of Red Cliffs, on either side of the road, is Yarrara Flora and Fauna Forest Reserve which contains a rare surviving remnant of belah woodland that has been largely cleared from the Mallee area. It has designated walking tracks and is known for its impressive birdlife. It is a premier location of "twitchers" who are attracted to the area by the possibility of observing such rare birds the White-browed treecreeper and Major Mitchell's Cockatoo. In total some 65 bird species have been observed in the area.

The Millewa Community Pioneer Forest and Historical Village
Beyond Yarrara Flora and Fauna Reserve and 80 km west of Red Cliffs is Meringur where you will find the Millewa Community Pioneer Park which was established in 1986. Originally Millewa was an "experiment in close settlement dryland farming". It nearly failed because of lack of water for both domestic and stock purposes but by 1928 it had 708 farms. The rainfall was only 250 mm per year. This had declined to 200 farms by 1945. "The area today is freehold land, a modern successful grain growing region producing hard grain high protein quality wheat and malting grade barley. With the availability of piped water from the Murray River enabling mixed farming with sheep and cattle enterprises." The Pioneer Park includes a history resource centre, a police lockup, a blacksmith's shop, a wood burning baker's oven, a railway station with historic guard's vans, a farm machinery display, a horse drawn caravan and other heritage buildings containing historical material relating to the early European settlement of the area. There is an interpretative centre, displays, barbecues, toilets and fresh water. It is open every day from 10.00 am - 5.00 pm. For more details check out http://www.millewapioneerpark.org.au.

* Prior to Europeans settlement the district was occupied by the Keramin Aborigines.

* By 1918 Red Cliffs had been chosen as the site of what turned out to be the largest soldier settlement in Australia. Land was cleared for a nursery where millions of vine cuttings were grown then the 700 diggers began to arrive. They cleared the mallee scrub and cultivated vineyards with a view to establishing a dried fruit industry .

* In 1920 Big Lizzie arrived in Red Cliffs to help clear the land.

* To draw water from the Murray River up over the cliffs, the largest pumping station in the Southern Hemisphere was built in 1923.

* After the Second World War, some of the original blocks were resold to the new war's veterans, although many are now owned by southern European immigrants.

There is a useful local website. Check out https://redcliffshistory.wordpress.com. 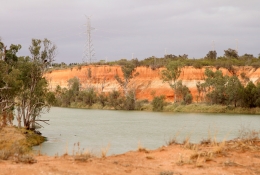 The red cliffs on the Murray River from which the town takes its name. 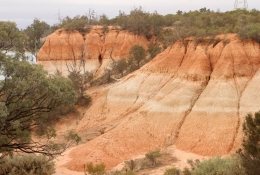 The Red Cliffs from the lookout on Woomera Avenue. 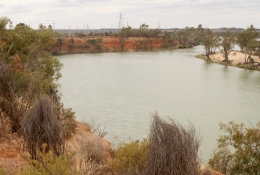 The view across the Murray River from the Red Cliffs. 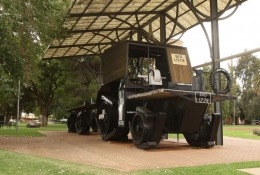 Big Lizzie in the park near Barclay Square. 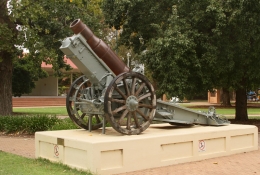 A German 8.2 Howitzer in Barclay Square. 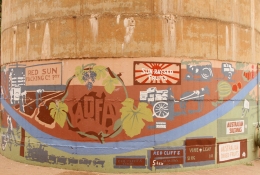 The mural around the base of the Water Tower in Barclay Square. 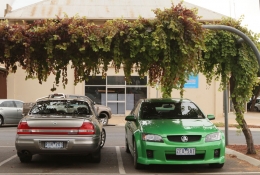 A unique form of shade in the parking bay in the centre of Red Cliffs' main street. 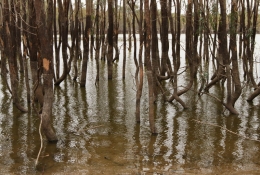 Trees on the foreshore of Lake Hattah in the Hattah-Kulkyne National Park. 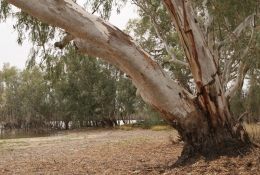 The constant danger of falling branches from Red River Gums - they are known as "widow makers" for a reason.