Redcliffe was originally the site of the first penal colony in Queensland. It was discarded when the colony moved further inland and slowly it evolved as a small seaside retreat north of Brisbane until the construction of the Hornibrook bridge which linked Brighton, an outer Brisbane suburb, to the Redcliffe peninsula. Today Redcliffe is part of Brisbane's suburban sprawl. It has excellent seaside restaurants, a pleasant walkway along the beaches and a holiday ambience even though it is effectively a suburb of Brisbane.

Redcliffe is located on Moreton Bay 35 km north of Brisbane via Sandgate Road and the Hornibrook Bridge.

The district was visited by Matthew Flinders. He spent 15 days in Moreton Bay, landed and named Red Cliff Point on 17 July, 1799. He was simply describing the red cliffs in the area. The name was taken up by the explorer John Oxley in 1823 and eventually contracted to Redcliffe.

Redcliffe Museum
Central to any understanding of the peninsula and its history is a visit to Redcliffe Museum which is located at 75 Anzac Avenue, south of Redcliffe Point, in the former Sacred Heart Memorial Church building. Their website states: "The Museum and its Collections offer an intriguing insight into this unique region: its European history since 1799, its heritage as Queensland’s first European Settlement in 1824-25, its much older indigenous culture, its rich maritime history, and the pleasures and surprises of bayside life ... Redcliffe Museum celebrates the evolution of the Peninsula’s character and identity, and its significance to the world around it. In exploring past triumphs and tragedies, contemporary interests and future aspirations, the Museum becomes a vibrant, interactive and perpetual reminder of the region’s past, present and future." It is open Tuesdays to Sunday, 10.00 am to 4.00 pm. Entry is free and the facilities are air-conditioned. For further information contact (07) 3883 1898 and for more details check out https://www.moretonbay.qld.gov.au/redcliffe-museum.

Heritage Walk
The Redcliffe Historical Society have developed an excellent 'Heritage Walk' which starts at the Museum and includes a number of interesting buildings (Sutton House, the Redcliffe Jetty and the old Redcliffe Hotel) as well as the sites of the original penal colony. During the short life of the settlement a store, prisoners barracks, a kitchen, well, whipping post, gaol, guard room, brick kiln, soldiers barracks and Commandant's House were all constructed. The stores and the main landing place were located where the Redcliffe Jetty now juts out into Moreton Bay. The walk includes the locations of the brick kiln, the Commandants House, and the Commissariat Store. This is a walk where only the sites remain. The original buildings have disappeared or been demolished. An excellent interpretative booklet which looks at the underlying politics of the establishment of the penal colony at Redcliffe titled Redcliffe's Origins is also available.

Bee Gees Memorial Walkway
Redcliffe is legitimately the birthplace of the hugely successful pop group, The Bee Gees. The Gibb family had emigrated to Australia from Manchester, England and in 1959 they gave their first performance at the Redcliffe Speedway. In February, 2013 Barry Gibb and Moreton Bay Regional Council unveiled a new statue and walkway - called Bee Gees Way - honouring the world famous pop group.

The statue which is 1.7 metres tall was created by Phillip Piperides and is based on a number of photos of the three Gibb brothers personally selected by Barry Gibb himself. Bee Gees Way is located off Redcliffe Parade and includes 60 photographs, 13 album covers, a mural of the band as well as songs and captions provided by Barry Gibb. For more information check out https://www.moretonbay.qld.gov.au/general.aspx?id=119400. There is also a downloadable brochure on Bee Gees Way - check out https://www.moretonbay.qld.gov.au/uploadedFiles/moretonbay/discover/arts-culture/bee-gees-flyer.pdf.

* Prior to European settlement the area around Redcliffe was occupied by the Ningy Ningy, part of the larger Yuggera Aboriginal language group.

* The first European to reach the area was Matthew Flinders on 17 July 1799. He spent 15 days in Moreton Bay. He made landfall below Redcliffe’s Woody Point and proceeded 400 metres to what is now Clontarf. Here he encountered a vacant Aboriginal camp.

* In 1823 the surveyor and explorer John Oxley, on instructions from Governor Brisbane, arrived in Moreton Bay looking for a suitable place for a northern convict outpost. Oxley recommended Red Cliff Point.

* On 24 September, 1823 the brig Amity brought officials, soldiers, their wives and children, and 29 convicts to Redcliffe.

* In September and November 1824, three children were born in the colony. They were the first European children born in Queensland.

* The death of Felix O'Neill in March 1825 combined with Aboriginal attacks, hordes of mosquitoes and the lack of safe anchorage facilities, led to the settlement being moved from Redcliffe to the banks of the Brisbane River.

* Few buildings were left standing and folklore says that the local Aborigines called the houses 'oompie bong' meaning 'dead house'. The name stuck and 'humpybong' was used to describe the Redcliffe Peninsula.

* By the early 1860s the district was opened up for agricultural purposes.

* By the 1880s hotels had been built at Woody Point, Redcliffe and Scarborough.

* The Redcliffe jetty and Post Office were built in 1885.

* Garnet & Natone's steamers from Brisbane started a regular service to Redclifffe in the 1880s.

* Redcliffe remained isolated until 1935 when the Hornibrook Highway which stretched 2.74 km across the mouth of the Pine River, was built. It linked Redcliffe to Brisbane.

* In 1958 the Gibb family, with the famous Robin, Barry and Maurice Gibb, arrived from Manchester, England and settled at Redcliffe.

* Redcliffe officially became a city in 1959.

* In 1974 it was decided to build a second bridge. That year also saw the first high rise in the suburb, Redcliffe Towers, completed.

* The second bridge to the peninsula was completed in 1979. It has 99 spans and a total of 400 beams. The longest pile was driven 38 metres before reaching sandstone.

There is a useful local website. Check out http://www.redcliffe.net.au. 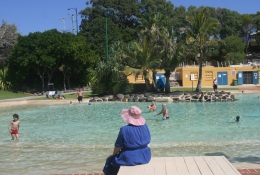 Settlement Cove Lagoon is suitable for all ages. 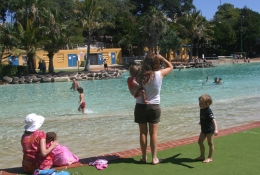 Settlement Cove Lagoon is popular with families in the summer months. 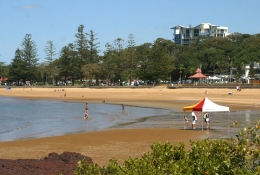 The beach patrolled by the Redcliffe Peninsula SLSC at low tide. 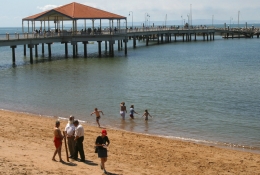 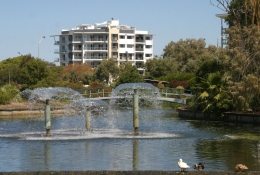 The fountains and footbridge in Humpybong Park