Roadhouse on the Stuart Highway between Tennant Creek and Newcastle Waters.

There are a number of places on the Stuart Highway which are nothing more than roadhouses designed to fill up - with both petrol and food - travellers making the long journey from South Australia to Darwin. Renner Springs is no different than any of the others. Outside the settlement are two sites of interest: one a quirk of geology, the other a sad reminder of the problems that existed in the Northern Territory between Europeans and the local indigenous population. The rich cattle country of the Barkly Tablelands surrounds it. Consequently it is known as 'The Heart of Beef Country'.

Renner Springs is named after a certain Dr Frederick Renner who was the medical doctor accompanying, and looking after, the men who constructed the Overland Telegraph Line. When the line reached the springs in 1872 it was decided to name them in honour of Dr Renner.

Mud Springs
The good folks at the Desert Inn will point you in the direction of the Mud Springs. It is an easy walk from the roadhouse and nearby is a lagoon which supports a large range of the Territory's birdlife - the Desert Inn website has a list of birds which have been sighted at the lagoon. See http://www.rennerspringshotel.com.au/index.php?page=bird-watching.

Lubra's Lookout
Located 5 km south of Renner Springs this rocky outcrop offers fine views over the surrounding, very flat terrain. It can be climbed in about 15 minutes and the views are worth the effort. According to the local Aborigines it is a place sacred to the women of the area.

Churchill's Head Rock
This is not to be taken seriously. Some 78 km south of Renner Springs on the eastern side of the road is a rocky outcrop which looks remarkably like the jowly profile of Winston Churchill. Some wit has placed a piece of piping where the Churchillian cigar should be although it is quite likely that another wit has removed it. It is known as the Churchill's Head Rock.

Attack Creek
Located 11 km south of Renner Springs and 74 km north of Tennant Creek is a monument recording that on 25 June 1860 John McDouall Stuart and his two companions William Kekwick and Benjamin Head, on Stuart's first attempt to cross Australia, encountered hostile Warumunga Aborigines who forced him to turn back. The expedition was also suffering from illness. The site became known as Attack Creek although the memorial does not have any direct connection with the actual location where the altercation took place. For more details check out http://www.parksandwildlife.nt.gov.au/parks/find/tennant-creekbarkly-region/attackcreek#.UZ6kZruXSHk.

* For tens of thousands of years the Warumunga Aboriginal people lived in the area enjoying the plentiful fresh water and the wildlife attracted by the springs and lagoons.

* The first European to reach the area was the explorer John McDouall Stuart on his 1860 journey from South Australia to the northern coast of the continent. He was turned back by hostile Warumunga Aboriginal people just 11 km south of Renner Springs.

* In 1872 the Overland Telegraph line, that vital link between Darwin and south-eastern Australia, came through the district and the settlement was named after the team's doctor.

* The area developed as important cattle country because it was found that Renner Springs was one of many springs providing fresh, reliable water in a semi-desert environment.

* In 1947 the first roadhouse was built and operated by the Doyles. It has had five owners since then.

There is no specific visitor information but the roadhouse has a particularly useful website. Check out http://www.rennerspringshotel.com.au/ 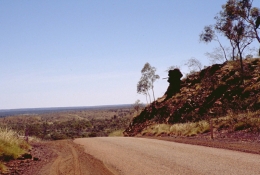 Churchill's Head Rock, named by US servicemen during World War II, with a pipe for the cigar added by some wit.