Richmond, one of the original five Macquarie Towns, is now a substantial outer western suburb of Sydney. Located on slightly raised land beside the Hawkesbury-Nepean River, it is an interesting combination of modern outer suburbia with a significant number of important historic buildings dating from the 1810s and 1820s. It is located on the rich floodplains of the Hawkesbury and consequently, in 1891, became the site of the Hawkesbury Agricultural College. Today the appeal of the town lies largely in the exploration of its numerous historic buildings.

Richmond, the second largest of the Macquarie Towns, is located 19 metres above sea level, 63 km north-west from Sydney and 7 km west of Windsor.

There is some dispute over the naming of Richmond. Some sources suggest that it was Governor Arthur Phillip, in 1789 in his exploration of the area looking for suitable land to grow produce, who climbed a small hill near the Hawkesbury River and named it Richmond Hill in honour of the Duke of Richmond. Others cite Governor Lachlan Macquarie who, in 1810 established the five "Macquarie Towns" and "A large Party of Friends dined with us today, consisting in all of 21 Persons, including our own Family. - After Dinner I christened the new Townships, drinking a Bumper to the success of each. - I gave the name of Windsor to the Town intended to be erected in the District of the Green Hills, in continuation of the present Village, from the similarity of this situation to that of the same name in England; the Township in the Richmond District I have named Richmond, from its beautiful situation, and as corresponding with that of its District ..."

Exploring Historic Richmond
There are two walking tours - the Westward Walk and the Eastward Walk - which take a total of 2 hours and 15 minutes and include 30 buildings and places of interest in the heart of Richmond. The appeal of Richmond is to wander. If you are prepared to explore and to walk you will begin to appreciate what an elegant town Richmond must have been by the 1850s. The total list of attractions can be found (and printed out) at the Richmond Council website - http://www.hawkesburyaustralia.com.au/info/things-to-see-and-do/richmond-walk. The notable highlights, which should not be missed, include:

1. The Post Office
Postal services began in Richmond as early as 1829 with an official Post Office opening in 1844. This Victorian Classical Revival building with a wide cast iron veranda and brick pilasters and arches was built in 1875. The first floor was added in 1888.

2. St Andrews Presbyterian Church
St Andrews Uniting Church (originally a Presbyterian church) was built in 1845 by George Bowman. The tower with its bell and clock was added in 1877. The clock was added in 1878. The church, bell and clock were all paid for by George Bowman who was Richmond's first mayor and a very active member of the local community.

4. Masonic Lodge
This building was originally the Presbyterian School but in 1860 it was purchased by the Department of Education and became a National School. In 1929 it was sold to the local Masonic Lodge.

5. School of Arts
The School of Arts was officially opened by Henry Parkes ('The Father of Federation') on 27 August, 1866 and has been an important public building ever since. From 1872-1913 it was the official meeting place for the Richmond Municipal Council.

6. Price's House
One of the earliest houses in the area, it was built by William Price in 1827 on an acre of land purchased from William Bowman. William Price had arrived in the colony as a convict in 1816.

14. Bowman Cottage
Bowman Cottage was originally built by James Blackman, a local farmer, around 1815. The building was obtained by George Bowman in 1820. Bowman turned it into an inn, the Royal Arrow, and remained there until his death in 1878. It was restored between 1985-1988 and today is occupied by National Parks & Wildlife.

15 & 16. St Peter's Church of England and Cemetery
St Peter's is a rectangular, sandstock brick building designed by Francis Clarke and built by James Atkinson. It was consecrated by Bishop Broughton in 1841. The St Peter's Cemetery contains the graves of many prominent local citizens including John Bowman, William Cox and Joseph Onus.

17. Josieville
Located at 2 Francis Street 'Josieville', a two-storey farmhouse built by Joseph Onus in the late 1830s. The original owner of the land was David Langley, who arrived in Australia in 1803 with his wife and three daughters. Langley was granted land at Richmond, along with two convicts and two ewes in 1804. He was made Superintendent of Government Blacksmiths in 1806 by Governor Bligh. Look at the building carefully. It has a simple hipped slate roof, an elaborate veranda with impressive cast iron (this was added in 1870) and the columns are octagonal and timber. The windows are six-paned with solid panel shutters. This was the northern boundary of the town of Richmond.

20. Richmond Park
Today Richmond Park which is an ideal place for a picnic and often used by sporting teams. It was originally the site of the local Richmond Markets and, when the railway continued to Kurrajong, the area was cut in two by the rail line.

21. The Royal Hotel
When it was built in 1865 for William Reid it was another hotel on the route to the mountains. Today it is the oldest continuously licensed hotel in Richmond. In the 1880s the most hotel was considerably enhanced with extensions, shower baths and a balcony supported by columns.

22. Toxana
Toxana was built for William Bowman around 1841. It passed through generations of the family but, by 1891, it was being used by Hawkesbury Agricultural College. The building was restored by the local council in 1978 and is now home to the Macquarie Towns Arts Society.

29. Andrew Town's House
Located at 122 Windsor Street is a house built around 1850 by Andrew Town who became the largest breeder of pedigree horses in the world in 1880s. Behind the house are extensive stables. Town entertained lavishly in this house in the 1880s.

30. 126 Windsor Street
This charming house, known as Heritage Cottage, was built around 1850 and is typical of the houses in Richmond at that time.

Hawkesbury Artists Trail
The Hawkesbury Artists Trail ... in the Steps of the Masters is a guide to 13 locations between Richmond and Pitt Town (five are around Richmond) where notable artists - Charles Condor, Arthur Streeton, Sydney Ure Smith, Julian Ashton et al - painted the local landscape. Each has a sign which includes the painting and information about the art work. Thus, No.6, at Pugh's Lagoon, records: "Charles Condor, born Great Britain, 1868, worked in Australia 1884-1890, died Britain 1909 'Pugh's Lagoon, Richmond' 1888 Formerly known as 'Cove on the Hawkesbury', oil on cardboard, 35.6 x 21.4 cm. Bequest of Mrs Mary Helen Keep, 1944 National Gallery of Victoria, Melbourne." The book outlining all 13 works can be purchased at the Hawkesbury Visitor Information Centre. For more information check out http://www.hawkesbury.nsw.gov.au/__data/assets/pdf_file/0009/20061/Artists-Trail-scan.pdf.

Pugh's Lagoon and Smith's Park
At the northern end of Richmond is Pugh's Lagoon, a delightful stretch of water with picnic and barbecue facilities which is ideal for a picnic. The council's Plan of Management describes it as an area of approximately 3.68 ha which is 920 m in length and 30-40 m wide. Check out http://www.hawkesbury.nsw.gov.au/__data/assets/pdf_file/0018/6291/2014-POM-Smith-Park-Pughs-Lagoon-adopted-by-Council.pdf for more information.

“Having sufficiently celebrated this auspicious Day of christening the five Towns and Townships, intended to be erected and established for the security and accommodation of the Settlers and others inhabiting the Cultivated Country, on the Banks of the Rivers Hawkesbury and Nepean; I recommended to the Gentlemen present to exert their influence with the Settlers in stimulating them to lose no time in removing their Habitations, Flocks & Herds to these Places of safety and security, and thereby fulfil my intentions and plans in establishing them.” And so the five towns, now on the outskirts of Greater Sydney, were created by the orders of the governor. A good, old fashioned government edict.

Hawkesbury Regional Museum
A sensible starting point for any visit to Richmond is, idiosyncratically, in Windsor 7 km to the east. It is the Hawkesbury Regional Museum at 8 Baker Street, Windsor. It is open Wednesday to Monday from 10.00 am - 4.00 pm and has an excellent range of material about the Macquarie towns and information which provides an insight into Richmond. Tel: (02) 4560 4655. It is the only publicly-run museum in the Hawkesbury area.

Hawkesbury Agricultural College
The Hawkesbury Agricultural College opened in 1891 and quickly established a reputation as the finest agricultural college in the country. Students arrived at the college in 1896 and it was around this time that the Stables Square (1896) was completed to cater for the draught horses which, at the time, were the standard form of farm energy and the Blacksmiths Shop (1894) were built. Both these buildings are reminders of a time when the horse was integral to all farming activity. Since 1989 it has been part of the University of Western Sydney but it still occupies 1500 ha of semi-rural land and has a Dairy School and an Experimental Farm.

* In 1789 Governor Arthur Phillip explored the area. It is claimed that Phillip climbed a small hill near the river and named it Richmond Hill in honour of the Duke of Richmond.

* Richmond was first settled by Europeans in 1794 and quickly became the granary for the colony.

* By 1799 the Richmond area was providing Sydney with half its grain requirements.

* In 1809 the Hawkesbury River flooded and ruined the crops in the area.

* When Macquarie established the five Macquarie towns in the Hawkesbury Valley in 1810 he specifically located the township on a ridge above the Hawkesbury River. Macquarie insisted that all the settlers in the area "move to these places of safety and security" and it was on this basis that the town of Richmond began to grow.

* Throughout the nineteenth century the town grew because of the rich agricultural lands which surrounded it and because it was ideally located on the cattle routes from the west and the north.

* The Hawkesbury Agricultural College opened in 1891.

* By 1916 Ham Common to the east of the town was being used for early aviation experiments. It was acquired by the RAAF that year.

* The Hawkesbury Agricultural College became part of the University of Western Sydney in 1989.

* With a regular rail service, Richmond has become part of Sydney's commuter belt. A true outer suburb of Greater Sydney on the edge of the Sydney basin.

The Hawkesbury City Council's website - http://www.hawkesburytourism.com.au - has lots of useful information about the district. 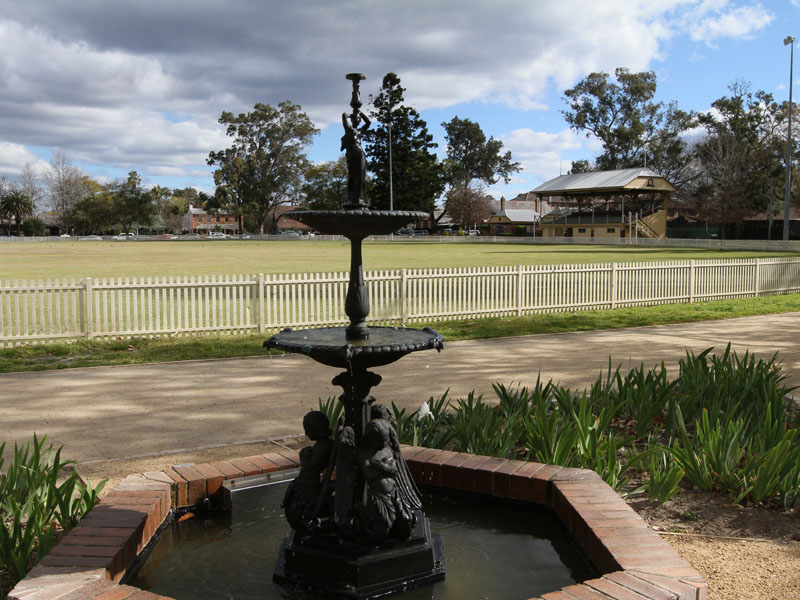 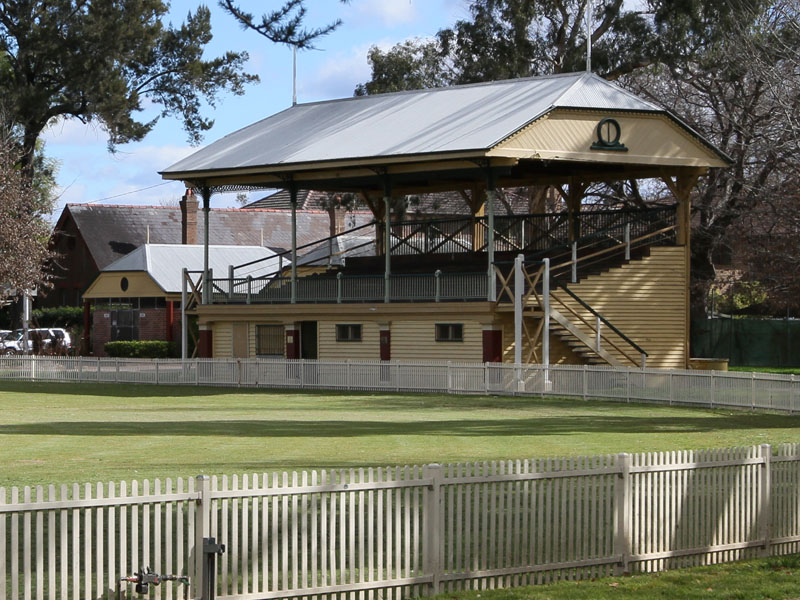 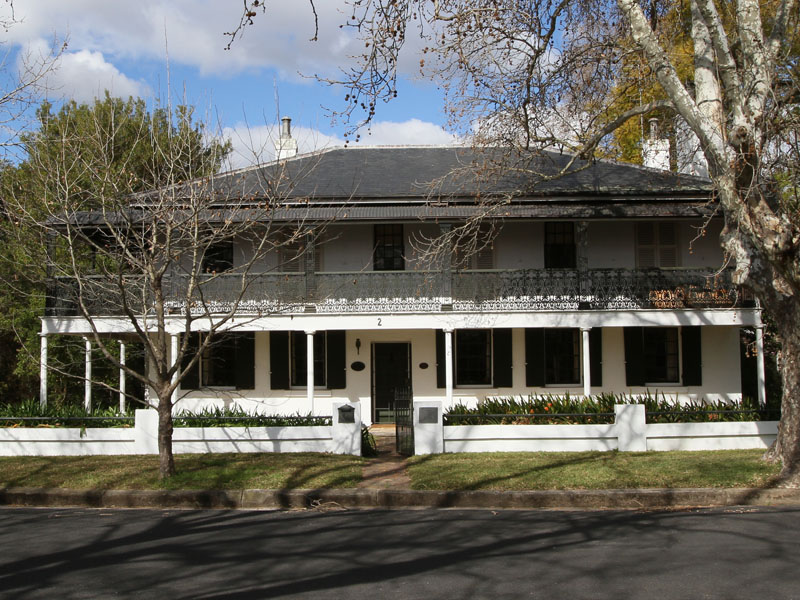 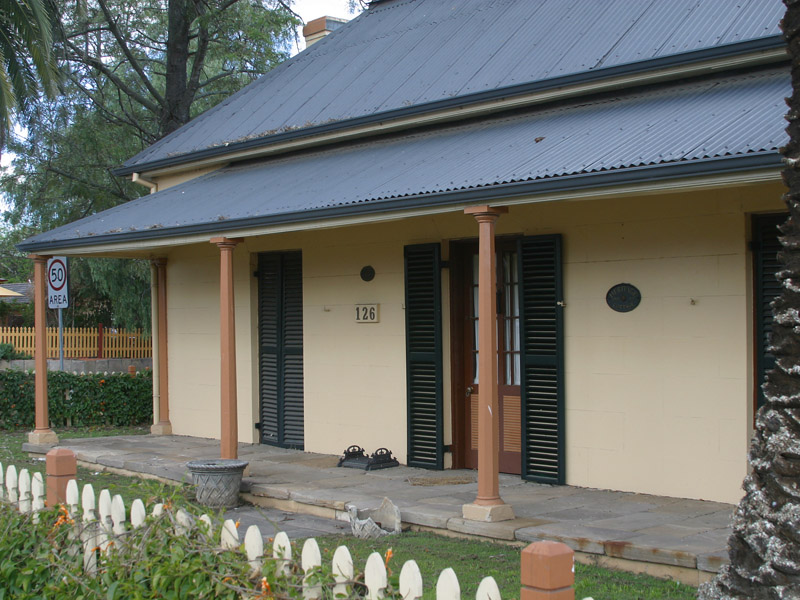 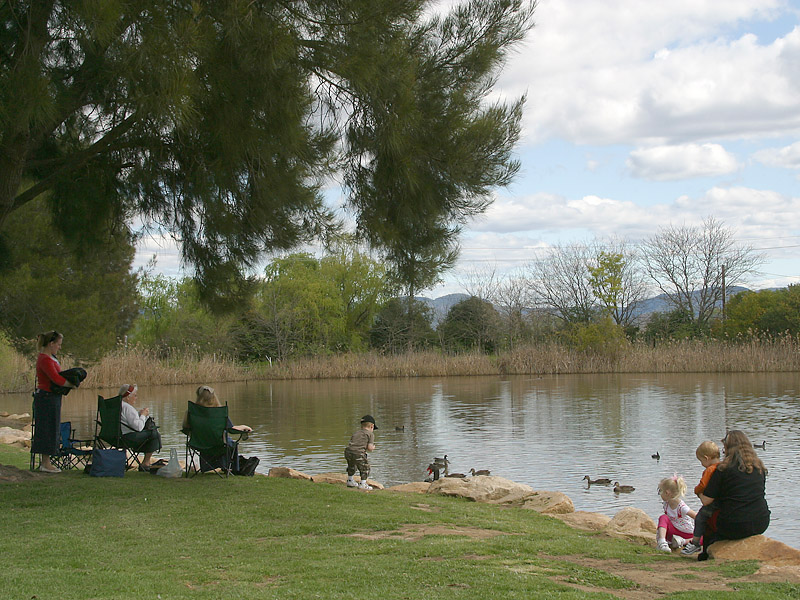 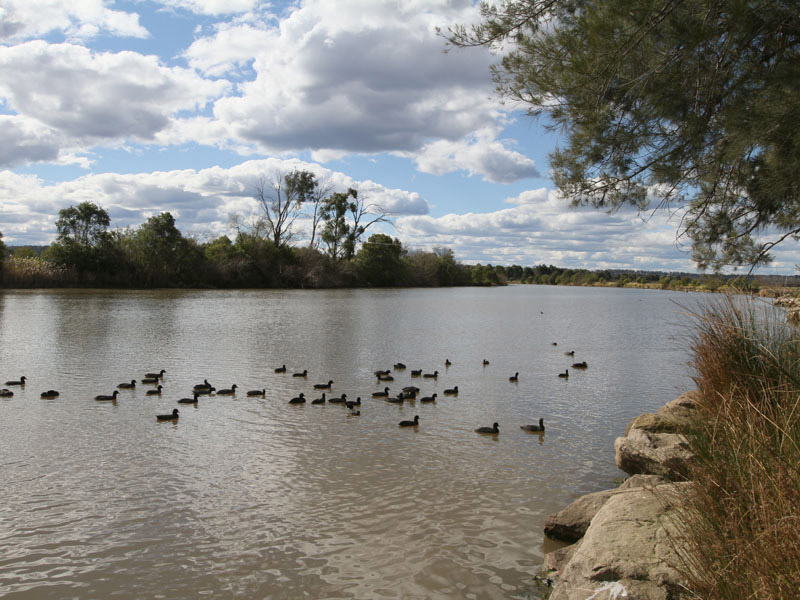