Outback town known as 'The Fossil Capital of Australia'

Richmond is a small outback town, located halfway between Townsville and Mount Isa, which is essentially a service centre for the surrounding sheep and beef pastoral community. Characterised by a wide main street (Goldring Street) it is enhanced by its median strip gardens of bougainvilleas, native trees and shrubs. The town's main attraction is Kronosaurus Korner - the town's marine fossil museum - which vividly reminds the visitor that over 100 million years ago this vast, flat area was an inland sea teeming with primitive wildlife.

Richmond is located 1,662 km north west of Brisbane via Toowoomba, Emerald and Charters Towers. It is 498 km west of Townsville and 406 km east of Mount Isa.

Arthur Bundock and Walter Hayes took up land in the district which they named the Richmond Downs Pastoral Run. It was named after the Richmond River in northern New South Wales which was where Bundock had been born.

Australian Dinosaur Trail
There is a 332 km trail through Richmond, Hughenden and Winton which is called the Australian Dinosaur Trail. It includes four major attractions:
* Flinders Discovery Centre at Hughenden
* Australian Age of Dinosaurs at Winton
* Dinosaur Stampede at Winton
* Kronosaurus Korner at Richmond
It is a superb exploration of the world of dinosaurs which existed in the area between 100 and 90 million years ago. Each dinosaur experience is totally different.
* Australian Age of Dinosaurs at Winton is a working laboratory where visitors can watch dinosaur bones being slowly revealed out of the stones that have held them for millions of years and even go to a quarry where the bones are being found and exhumed.
* Dinosaur Stampede at Winton is located over 100 km from the town but is unique. It is a stampede of 150 chicken-sized dinosaurs being chased by a large theropod. The footprints in the mud are still visible after 95 million years.
* Flinders Discovery Centre at Hughenden is the oldest of the attractions. The skeleton of the Muttaburrasaurus has been held in the town for over 25 years and a new, revitalised approach has seen numerous dinosaur experiences placed around the town.
* Kronosaurus Korner at Richmond is about the vast inland sea which stretched from the north coast of Queensland through the heart of the west and central west of the state and it focuses on the giant sea creatures which lived in the area.

The highlight for Richmond is:
Kronosaurus Korner
Located at 91-93 Goldring Street in the centre of town, Kronosaurus Korner claims to be the best marine fossil museum in Australia. Certainly, because the Great Artesian Basin was a vast cretaceous-era inland sea which existed from about 97.5 to 120 million years ago and covered the land to a depth of 40 metres, the area around Richmond is rich with fossils which keep being discovered and dug up. The museum includes a theatrette presentation, there are hand-held audio guides and there is even advice on how visitors can find their own fossils.
The collection in Kronosaurus Korner includes such iconic finds as: In 1989 the skeleton of a 100-million-year-old Pliosaur was discovered near the town; the famous Kronosaurus queenslandicus was discovered at Army Downs north of Richmond in 1929 by a team of palaeontologists from Harvard University; and another fossil is the Richmond Pliosaur (known as Iever's crocodile), measuring 4.25 metres, with a long slender snout and interlocking teeth. These marine reptiles were fast swimmers feeding on fish and other aquatic animals. Other marine remnants include a 7 metre Plesiosaur known as Woolungasaurus (its remains indicate that it swallowed stones for ballast, as does the modern crocodile), the more shark-like Icthyosaurus (7 metres), a large turtle, fossilised squid, shellfish and other bony fish.
As well as marine fossils there are fossils of land dinosaurs. These include an 80% complete Ankylosaur called a Minmi paravertebra (it is considered the most complete dinosaur skeleton to be found in Australia) and a brachiosaur. The core of the building was the town's old Strand Theatre which looked more like a Nissan hut than a cinema. There is a very detailed website. Check out http://www.kronosauruskorner.com.au.

Heritage Walk
Included in the town's excellent brochure (http://www.kronosauruskorner.com.au/documents/432361/3316773/You%27ll%20Dig%20Richmond%20Brochure.pdf) is a simple five block walk along Goldring Street which identifies 21 historic places of interest - some are still intact, others are little more than memories. It starts just beyond the Lions Park and continues past the Cambridge Downs ruins to the Yong Gee Store and then back up the main street to Dead Man Island. Check it out on Page 9 of the brochure. Strangely the walk does not include the Roman Catholic Church or the Moon Rocks Monument in Jack Brown Lions Park.

Moon Rocks Monument
In the Lions Park, at the southern end of Goldring Street, is a strange monument made of different shaped limestone rocks positioned on top of each other. The rocks are a local phenomenon known as 'moon rocks' which can weigh many tonnes and which often have fossilised remnants of fish and shells inside. The monument, opened by Premier Joh Bjelke-Petersen, celebrates the bitumen sealing of the Flinders Highway in 1976.

Richmond War Memorial
Also in the Lions Park is the Richmond War Memorial - an unusual memorial made from three stylised rifles each marking the graves of three ANZAC soldiers who lost their lives at the battle of the Somme in World War I. Original wooden crosses on the battlefields were made from artillery shells and ammunition boxes. To signify this fact the centre of the memorial constitutes a steel cross that extends beyond the uprights. It was dedicated on the 25th April 2001.

Lake Fred Tritton
Located off Goldring Street behind the Lakeview Caravan Park, since it was officially opened in 2004 Lake Fred Tritton (named after a local mayor), has been the town's watery retreat during the summer months. It contains 314 megalitres and is used for fishing, skiing, jet skiing, canoeing and swimming. The lake is stocked with red claw yabbies, barramundi, sooty grunter, sleepy cod, archer fish, forktail catfish, gulf grunter and other varieties. There is a paved walkway, sandy beaches, an excellent water park for children, an indigenous bush tucker garden and facilities for picnics and barbecues.

Fossicking
Located 12 km and 12.4 km out of Richmond on the road to Croydon are two Fossil Hunting sites where, if you are incredibly lucky and have a hammer and a shovel, you might stumble upon the fossil of a fish, marine reptile or squid. Check details at Kronosaurus Korner because there are also Professional Digs which are held annually and Prehistoric Pals in Preparation Workshops are also organised and held. Check out http://www.kronosauruskorner.com.au or contact 1300 KRONOK.

* Prior to the arrival of Europeans the area was home to people from the Wunumara Aboriginal language group.

* The area was first explored by William Landsborough in 1862. He was looking for Burke and Wills.

* Landsborough's report was so positive that by 1880 the area had been settled by pastoralists.

* In the 1870s Arthur Bundock and Walter Hayes took up land which they named the Richmond Downs Pastoral Run.

* The discovery of gold at the Woolgar fields 113 km north of the town in 1880 resulted in the settlement of Richmond becoming an important stopping point on the Cobb & Co route to the goldfields.

* The townsite for Richmond was surveyed in 1882.

* By 1892 the town had three hotels, three stores and two blacksmiths.

* In 1904 the railway reached the town and it became a terminus and railhead for the Gulf country.

* Between 1904-1908 Richmond was the railhead for cattle being railroaded to the coast.

* In 1909 St John the Baptist Church of England was consecrated.

* In 1929 the remains of Kronosaurus queenslandicus, a predatory marine reptile, were found by a Harvard paleontology team.

* In 1989 the fossil of a 100-million year old pliosaur was discovered on nearby Marathon pastoral station.

* In 2010 dinosaur fossils (vertebrae from the ichthyosaur) were discovered at the Richmond State school.

There is a hugely useful brochure which can be downloaded at http://www.kronosauruskorner.com.au/documents/432361/3316773/You%27ll%20Dig%20Richmond%20Brochure.pdf. 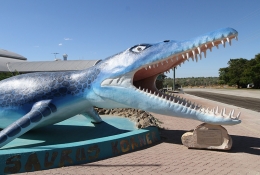 The model of the Kronosaurus outside the Fossil Centre 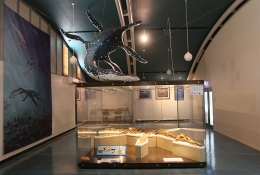 Penny the Richmond plesiosaur - a model floats above the fossil while life in the ocean is depicted in a painting on the wall. 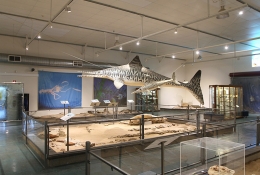 Models of ancient sea life float above their fossilised remains 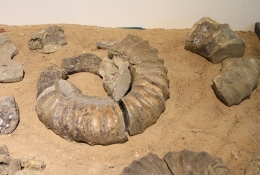 A giant ammonite in the Kronosaurus Korner Fossil Centre 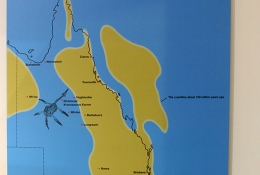 The map of the vast inland sea at Kronosaurus Korner 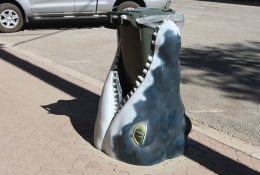 Even the local street garbage bins have dinosaurs 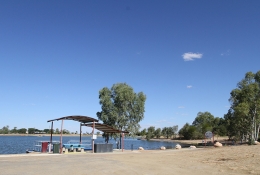 Lake Fred Tritton - ideal for swimming or a picnic BBQ 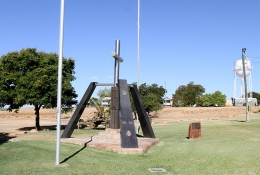 The unusual and modern War Memorial in the Lions Park 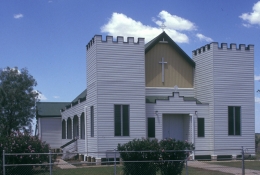