Most famous and most visited historic town in Tasmania.

Known as Tasmania's most significant historic town, Richmond is set in gently undulating country on the banks of the Coal River. It has no fewer than 45 buildings dating back to Georgian times and listed on the National Estate. Although it is important historically, in recent times Richmond's proximity to Hobart has ensured that it has become a hugely popular tourist attraction which has resulted in stone houses, commercial buildings and hotels being converted into galleries, gift shops, cafes serving Devonshire teas, restaurants, craft shops, and museums.

Many of the buildings in the town have been painted and scrubbed so that the visitor, rather than seeing something old and weathered, is left with the impression that this is a village struggling to find a place between the 1820s and 2013.

Richmond is located 27 km north-east of Hobart via the Tasman Highway and Richmond Road.

Richmond is one of the few town names in Australia which exists in New South Wales, Queensland, Victoria and Tasmania. It is almost certainly borrowed from Richmond in the English county of Surrey which, in turn, is a corruption of the French "riche monde" meaning "fortified castle" or "strong hill". The settlement was named by Van Diemen's Land Lieutenant Governor William Sorell in 1824 when a 90 acre (36 ha) site was allocated for the development of a military staging post and convict station.

Richmond Gaol
Work started on the Richmond Gaol at 37 Bathurst Street in 1825 and wasn't completed until the surrounding wall was built in 1840. In the interim the Gaoler's House was built in 1834 and the cookhouse, solitary confinement cells and women's quarters in 1835. The original building was probably designed by the Colonial Architect David Lambe. It was built to house convict work gangs but during its life it housed such famous inmates as the bushranger Martin Cash and 'Ikey' Solomon, the London pawnbroker who was the model for Fagin in Oliver Twist. In 1834 John Lee Archer converted the single building into a 'square' by adding the gaoler's house and the east and west wings. The most impressive section of the completed complex was the gaoler's house which was two storeys and boasted elaborate 16 pane windows. The gaol, which is now open to the public from 9.00am - 5.00pm, operated until 1928. In the 1940s it became an historic site and it now includes displays of relics and documents from its earliest years. It is the oldest surviving penal institution in Australia and has been preserved as it was when it housed convicts. It was operating five years before Port Arthur was established. Check out http://richmondgaol.com.au/ for opening times and entrance fees.

Richmond Bridge
When it was gazetted as a place of National Heritage importance in 2005, the citation read "Richmond Bridge, built by convict labour in 1823 to 1825, is the oldest, surviving, large, stone arch bridge in Australia with a high degree of integrity." It could have added that it is a particularly beautiful bridge which has aged with elegance over its 190-year life. It could also have been pointed out that the bridge is associated with a number of myths including the story of one convict who, tired of life, committed suicide by hurling himself from the bridge. There is another tale of the murder of a malevolent convict overseer named Simeon Grover who was beaten and thrown to his death by convicts tired of being the recipients of his inhumane treatment. It is said that Grover's ghost still haunts the bridge. In the early years of the colony Richmond was an important point on the route from Hobart Town to the Tasman and Fleurieu Peninsulas. In times of flood the Coal River was often difficult to ford and as early as 1820 a bridge was recommended by Royal Commissioner John Thomas Bigge. The bridge, made from sandstone quarried at Butchers Hill and transported in hand carts by convicts, was probably designed by Acting Colonial Engineer, Major Thomas Bell, and completed in 1825. It was briefly known as Bigge's Bridge. Major repairs were needed in 1828 and 1884. For further details check out http://www.environment.gov.au/heritage/publications/about/pubs/national-heritage-richmond.pdf. It was placed on the National Heritage list in 2005.

Court House
The Richmond Court House in Bridge Street is part of a complex of public buildings which includes the Watch House and the Council Chambers. All the buildings were completed between 1825-26. They were probably designed by David Lambe, the Colonial Architect at the time, and were a symbolic indication of the increasing importance of Richmond. It was used as the Richmond Council Chambers from 1861 until 1993.

Historic Buildings
The best way to experience Richmond is to simply start walking. There are literally dozens of superb Georgian buildings. A suitable starting place is Bridge Street where, for example, No. 12 is Ivy Cottage; No. 16 is Bellevue House; No. 18 is Oak Lodge a handsome two storey building built for Henry Buscombe - brother of James who built Prospect House - between 1831 and 1842; No. 20 is Lilac Cottage; No. 25 is the Congregational Church which was completed in 1873 after an earlier church had been burnt down; No. 29 is the Village Store  and dates from 1836; No. 29 is the Old Store and Granary; No. 42 is the Richmond Arms and all are listed by the National Estate.

St John's the Evangelist Catholic Church
St John's Church, on the banks of the Coal River, is the oldest Roman Catholic Church still in use in Australia. The church was designed by the ex-convict architect, Frederick Thomas, and the nave was completed in 1836 and opened on 31 December 1837. The church was greatly enlarged in 1859. The church has had three spires with the second being added early in the twentieth century and the third in 1972. The infant son of the Irish rebel leader, Thomas Francis O'Meagher, is buried near the church's doorway. O'Meagher is one of those romantic rebels who was transported to Australia but managed to escape to America where he became the Governor of Montana. For more details on the church check out http://www.puginfoundation.org/assets/Richmond_Essay.pdf

St Luke's Church of England
St Luke's Church of England is located 26 Torrens Street is listed in the National Estate Register which records that 'This Georgian stone church was designed by Colonial Architect John Lee Archer, and erected in 1834-36. The foundation stone was laid by Governor Arthur in 1834, and the clock, made in England in 1828 and previously installed in the tower of St David's, Hobart, was installed in St Luke's in 1922.' The church was constructed by convict labour and James Thompson, the convict who was responsible for the timber work inside the church, was granted his freedom as a reward for his exceptional work.

* Prior to European settlement the area around Richmond was inhabited by the Paredarerme Aborigines who conducted guerilla warfare against the European invaders.

* The Richmond district was explored within weeks of the establishment of the British settlement at Risdon Cove in 1803. Lieutenant John Bowen, accompanied by a small party, crossed from the Derwent Valley to the valley and finding small deposits of coal, named the Coal River.

* The settlement of the district around Richmond occurred almost immediately with land being granted to settlers who proceeded to grow wheat with considerable success. By 1815 a flour mill had been built to process the harvest and the Coal River valley quickly gained a reputation as the granary of Van Diemen's Land.

* In 1824-25 the settlement was named by Lieutenant Governor William Sorell and the bridge, opening up the Tasman Peninsula, was completed.

* By the 1830s Richmond had become the third largest town on the island and was an important military outpost and convict station.

* When, in 1872, the Sorell Causeway was completed, Richmond's importance as a stopover point disappeared. It was by-passed which meant that the Georgian buildings remained untouched. It became a town held in aspic.

* Today Richmond offers visitors an insight into the types of buildings the earliest settlers lived in, were incarcerated in, prayed in and drank in. It has become one of Tasmania's premier tourist attractions.

Uniquely Richmond offers the visitor a range of historical accommodation options including (and this is not comprehensive) Prospect House (1830s) at 1384 Richmond Road which was built by local convict labour for James Bascombe, a local businessman. Today it has a reputation for excellent food and is National Trust listed. Laurel Cottage, which dates from the 1830s, has been tastefully restored and furnished with antiques and heirlooms which recapture the period and Ivy Cottage (horse stables transformed into a rustic cottage) is located at 12 Bridge Street. Perhaps the highlight is the gracious Richmond Arms Hotel at 42 Bridge Street which dates from 1888. It replaced the Lennox Hotel (1827) which burnt down in 1886. The elegant cast iron lace work contrasts sharply with the simple, almost severe, Georgian buildings which dominate in the town.

There is a good local website with information about day trips, accommodation, shopping and dining. Check out https://richmondtasmania.com.au. 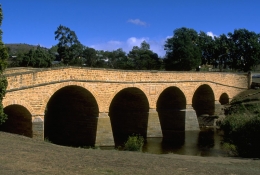 The oldest bridge in Australia - the bridge at Richmond (1823) 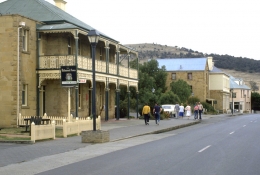 The Richmond Arms in the main street (pic taken 1993) 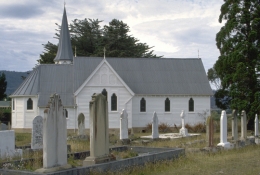