Service town on the copper route from Burra to the coast

Riverton is a medium-sized service centre located on the Gilbert River. It is a town with a large number of interesting historic buildings ranging from the delightful and impressive old railway station to the cottage and outbuildings of August Scholz which are located in Scholz Park.

Riverton is located 100 km north of Adelaide via the A1 and M20.

Gilbert Horner, a grandson of John Jubb Horner, one of Riverton's earliest settlers, explained in a letter that: ‘My grandfather often told us he named the town… Mr Masters remarked that the Surveyor General had written and announced his intention of laying out a new town… and asked for a name to be recommended. “What about calling it Hornertown?”, suggested Mr Masters. My grandfather, however, would not consent and said, “Call it after this little river”. ‘So the name of “Gilberton” was sent in [and refused] because the name had already been chosen [for an Adelaide suburb]. Mr Masters then called on Mr Horner and again suggested Hornertown [to which he replied] “If they will not accept Gilberton, call it Riverton”. John Jubb Horner was both the first flour miller and postmaster in the Gilbert Valley.

Riverton Heritage Walk
There is a truly remarkable and comprehensive Heritage Walk through Riverton. Check out https://riverton.sa.au/discover/riverton-heritage-walk. Produced with the help of the local historical society it lists a staggering 78 buildings and places of historic interest. An equally interesting, and much more abbreviated version of the Heritage Walk, can be undertaken by walking up and down the main street after starting at Scholz Park. The highlights on the main street include:

1. Scholz Park Museum
August Scholz established a wheelwright business in the tiny, four roomed cottage in 1874. In 1886 he bought the blacksmith's shop next door from William Sanders. The complex, now pleasantly located in a small park with some old equipment outside, remained in the Scholz family until 1966. After that the buildings were taken over by the District Council of Riverton (they paid a nominal sum to August Scholz's grandsons), restored and opened as a Museum in 1981. The museum is open on weekends or by appointment. It is located prominently in the main street.

Post Office
Two doors further down the street is the Post Office which was completed in 1876 and operated as a Bank Agency and Post Office.  A telephone exchange was added in 1910. The old Post Office facade remains unchanged.

History & Information Centre
Located at 21 Torrens Road and built in 1879 it was the original English, Scottish and Australian Bank and residence but was purchased by the local RSL in 1959. It is now owned by the Clare and Gilbert Valley Council and has been the History Centre and Information Centre since 1997 when it was restored. There is an RSL memorial beside the building.

Riverton Hotel
Two doors further along at 27 Torrens Road is the Riverton Hotel (once the Riverton Arms Hotel - the name was changed in 1876), a single storey pub which was built in 1854 by Frederick and John Hannaford and was a popular stopping point for the bullock drivers passing through the town. It was licensed in 1857 and is now on the State Heritage Register.

Mounting Stone
Located just beyond the corner of Masters Street and Torrens Road is an old mounting stone which dates from the 1850s. It was designed so that people could alight from horse drawn carriages and women, or "ladies" could get into carriages and onto their horses with demure dignity. It was moved to this location in 1996 so that it would not be damaged.

Aboriginal Woman and Child
Located in the park on the corner of Torrens Road and Elizabeth Street is a sculpture titled Aboriginal Woman and Child. "The sculpture represents the continuity of Ngadjuri people and culture. The Ngadjuri, literally meaning 'we people' and known by neighbouring Aboriginal peoples as the 'hills people' or the 'peppermint gum people' lived and thrived in this region for many thousands of years. They were distinguished for their high quality nets, basketry and possum skin coats. They occupied an important link in the trading and communications network across the country. The breakup of their society after European settlement in the 19th century is a sad but common story across this nation. It is hoped that this sculpture will act as an incentive for understanding and restoring Ngadjuri culture into the future." The sculpture was modelled and donated by Robert Hannaford, a local of Riverton. Hannaford modelled the final sculpture in his studio in the Riverton Gallery in 2014 and it was cast and prepared by Tim Thomson in the Adelaide Hills. The sculpture was unveiled by His Excellency the Honourable Hieu Van Le, Governor of South Australia.

Railway Complex
The beautifully preserved Railway Complex was completed in 1875 and added to in 1905. It gained notoriety when, on 22 March, 1921, it was the scene of the country's first political assassination. A passenger who was travelling on the Broken Hill Express from Adelaide fired a number of shots into the dining room and Percy Brookfield, a Member of Parliament for Broken Hill, was shot and killed when he tried to disarm the gunman. The bullet holes are still in the walls.

Holy Trinity Church
Located off the Barrier Highway, just beyond the golf course, is the Holy Trinity Church which was built in 1857-58 by James Masters - his wife Elizabeth laid the foundation stone. Slate was shipped from England to roof the church and in the early days there were candles placed at the end of each pew. The building is on the State Heritage Register. It has a Memorial stained glass window and a cedar staircase.

Robert Hannaford's Riverton Light Gallery
Located at 54 Torrens Street, this gallery was originally an ironmonger's shop and residence. It was built in 1866 and is now both a sculpture studio and gallery space where Robert Hannaford and his wife, artist Alison Mitchell, exhibit their paintings, drawings and sculptures.  Hannaford's sculptures include Roy Rene in Hindley Street, Adelaide; Simpson and his donkey in the Adelaide Memorial Gardens; and the Aboriginal and Torres Strait Islander War Memorial in Torrens Place. All were created in this gallery. Check out http://www.rivertonlightgallery.com/ for more details. The gallery is open by appointment or from 11.00 am - 4.00 pm on Sundays.

Rattler Trail
The railway line has been converted into a cycleway from Riverton to Auburn. It is a pleasant 19 km walk or cycle from the Scholz Park Museum in Riverton to Auburn. It was created in 2010 as an extension to the famous Riesling Trail. The trail passes through farmland, beside vineyards and past a dairy and is so flat that Auburn is 312 metres above sea level and Riverton is 265 metres. A difference of 47 metres over 19 km. Check out https://www.walkingsa.org.au/walk/find-a-place-to-walk/the-rattler-trail for more information. There is a downloadable map and details of both the Rattler and Riesling Trail at https://www.walkingsa.org.au/wp-content/uploads/2015/07/The-Riesling-Trail-and-Rattler-trail-2018-map-version.pdf.

* The first Europeans into the area arrived in the 1840s. James Masters, an innkeeper and pastoralist, sent his shepherds, with herds of sheep, into the Gilbert Valley at this time.

* Copper was discovered at Kapunda by Francis Dutton in 1842.

* Copper was discovered in the Burra district in 1845 by two shepherds, William Streair and Thomas Pickett. The Burra Mining Company imported Spanish-speaking mule drivers from Uruguay to transport copper from Burra to Port Wakefield. At the same time there were dozens of bullock drivers (mostly Irish) bringing copper to Port Adelaide through Riverton. The mules were obviously faster as the bullocks were only capable of doing 9 miles (14.5 km) a day consequently a series of tiny towns grew up at 9 mile intervals along the route. These were the evening watering holes for the bullock drivers who took the copper ingots to Port Wakefield and then brought coal (much of it from Newcastle-on-Tyne) back to fuel the smelters at Burra. The route was Burra through Saddleworth and Riverton and so on until it got to Port Adelaide. This saw the town grow as saddlers, wheelwrights and blacksmiths arrived to service the copper wagons.

* The district was surveyed in 1853 and farmers were sold 32 hectare lots of land.

* The first building constructed in Riverton was a pub which was opened in 1853 to provide for the thirsty bullock drivers.

* In 1854 a store, Post Office and Telegraph Office were opened by John Jubb Horner.

* In 1856 James Masters laid out the town of Riverton.

* In 1857 the Holy Trinity church was built by James Masters. The local school was opened that year.

* A Primitive Methodist Chapel was opened in 1861.

* The town's Court House and Police Station were opened in 1866.

* The railway line arrived in 1869 and subsequently the handsome railway station and refreshment rooms were built from local bluestone.

* The Riverton Railway Workshop closed in 1878.

* The Riverton Institute was opened in 1904.

* In 1921 Riverton Railway station was the scene of a mass shooting.

* In 1928 the first edition of the Mid-North Courier was published.

The local website has extensive information about the town as well as details of accommodation and eating. Check out https://riverton.sa.au. 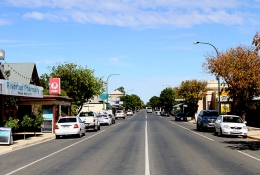 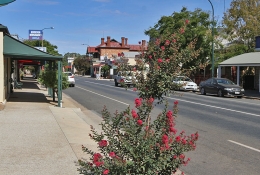 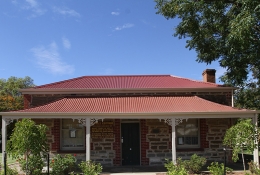 Scholz Cottage (1874) in Scholz Park on the main street 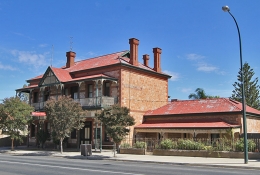 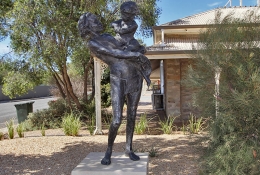 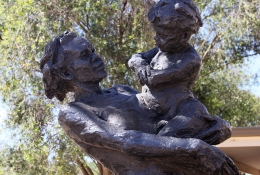 Detail of the Aboriginal Woman and Child sculpture on Torrens Road 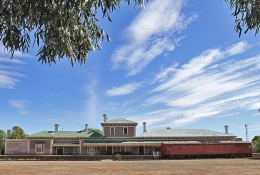