Rockingham is a glorious holiday and seaside resort town at the southernmost edge of the Greater Perth metropolitan area. In recent times it has become a popular tourist destination. It is noted for its beautiful safe beaches, the rich diversity of available water sports, the excellent nature cruises out to the islands and its environmental parks and lakes. The rapidly growing urban area stands on the edge of the sheltered waters of Cockburn Sound. The Shoalwater Islands Marine Park has some of the finest displays of sealife and birdlife to be found in Western Australia.

Rockingham is located 47 km south of Perth via the Kwinana Freeway. It is now part of the Perth-Kwinana commuter belt.

Rockingham was named after the 427 ton vessel, the Rockingham, which brought some of the first settlers to Cockburn Sound and, arriving in heavy weather on the afternoon of 13 May 1830, was blown ashore and wrecked. The early settlement became known as "Rockingham Town".

Penguin Island and Shoalwater Islands Marine Park
The most popular tourist attraction in the area is Penguin Island where, each day at 10.30, 12.30 and 2.30, the little penguins (previously known as Fairy Penguins) are fed at the Discovery Centre near the jetty. The island is only a five minute ferry trip from the mainland (the jetty is at the corner of Arcadia Drive and Penguin Road). There are four cruise experiences available: (1) the Penguin Island Ferry which runs hourly between 9.00 am and 3.00 pm (2) the 45 minute Penguin and Sea Lion Cruise (3) the full day Sea Kayak Tour and (4) the 90 minute Dolphin, Penguin & Sea Lion Adventure Cruise. The island, which is only about 1 km and 200 m wide, is an ideal place for swimming, picnics, surfing, snorkelling and bird watching. Check http://penguinisland.com.au/ for details and prices or tel: (08) 9591 1333.

Rockingham Heritage Trails
In 1988 the Western Australian government, as part of the Bicentennial Year, developed the Old Rockingham Heritage Trail which listed 23 points of interest in the Rockingham-Kwinana area. A fading plaque detailing the information still stands beside the town's main beach. It includes a map and there are important historic highlights (many of which are now nothing more than the locations of important buildings) but it does include, on a 30 km drive around the area, Day Cottage (1885) which once served as a wayside inn; Chesterfield Inn (1912); Bell Cottage (1880s); the turtle factory site at Point Peron and the Z Force Memorial and Palm Beach jetty. It also includes a number of historic places of interest in Kwinana including the wreck of the Kwinana and the bulk grain terminal. There is a map available from the Rockingham Museum.

The Rockingham-Jarrahdale Heritage Trail
At the same time as the creation of the Old Rockingham Heritage Trail, a Rockingham-Jarrahdale Heritage Trail was developed. It too is remembered at the beach with a fading sign and there is a map available at the Museum. The sign at the beach explains that it retraces "the route of the 1872 timber railway" and the signage, which has an excellent map, records: "In 1871 the Rockingham Jarrah Company was granted a lease of 250,000 acres of prime jarrah forest in the Darling Range. The following year the company built a sawmill on a site which became known as Jarrahdale, a jetty at the port of Rockingham were timber could be loaded onto ships for export, and a railway line to carry the timber from mill to port. The Rockingham-Jarrahdale Heritage Trail retraces the route of this railway, one of the earliest built in Western Australia and a vital part of the area's development and the state's early timber export industry. The trail is a 36 km scenic drive which at a leisurely pace will take you an hour to complete. Beginning at the site of the original jetties in Rockingham, it passes through the coastal plain where the district's first farming began, crosses the flats to Mundijong, then climbs the escarpment to picturesque Jarrahdale."

Rockingham Museum
Located at the corner of Flinders Lane and Kent Street, the Rockingham Museum, which is housed in the Art Deco Rockingham Road Board Building, used to have an excellent exhibition dealing with the Z Force which was moved to the Maritime Museum in Fremantle. Today it has displays relating to clothes and fashions, the Group Settlement farms, historic photographic equipment and souvenirs from the two World Wars. Tel: (08) 9592 3455. Check out http://www.rockinghammuseum.org.au/ for more details.

Rockingham Environment Centre - Naragebup
Located at 49 Safety Bay Road, across from Lake Richmond, the Rockingham Regional Environment Centre was opened in 2002 as the first purpose built environment centre in Western Australia. It is an education and resource facility for the community and is designed to enable a greater understanding of environmental issues and sustainable lifestyle choices. The centre includes a reptile realm, a number of critically endangered loggerhead turtles, a butterfly house, a nature trail and bushtucker garden, and a wetland ecosystem. It is open Tuesday to Sunday from 10.00 am - 3.00 pm. Tel: (08) 9591 3077 or check out http://www.naragebup.org.au/ for more details.

* Prior to the arrival of Europeans the area was inhabited by members of the Wajuk Aboriginal language group.

* The first European to explore the coast around Rockingham was probably Willem de Vlamingh in 1696. He was searching for the lost ship, Ridderschap van Hollandt.

* Between 1801 and 1804 the coast around Rockingham was explored by the Frenchman, Nicholas Baudin, who named Garden and Carnac Islands respectively Ile Buache and Ile Berthellet. He also named Cape Peron, now known as Point Peron.

* Captain Stirling explored the area in 1829 and wrote that at "Buache Island we found fresh water by digging in the sand. I had a well made, fifty yards from shore, and it was instantly filled with fresh water." Stirling decided that Garden Island (he renamed it) would be a suitable site for the first settlement in Western Australia.

* The first settlement of Rockingham occurred when Thomas Peel (cousin of the British Prime Minister) arrived with a group of settlers aboard the ship Gilmore which anchored in Cockburn Sound on 15 December 1829. They were followed shortly afterwards by the two further vessels, the Hooghly (a vessel of 465 tons) and the Industry (87 tons).

* Because the Secretary of State for the Colonies, Sir George Murray, had demanded that the colony be started by 1 November 1829, Peel's grant was cut to from 1 million acres to 250 000 acres (101 000 ha). He was being punished for being 6 weeks late.

* Peel was furious that his original land grant had been reduced but Captain Stirling persuaded him to take up land south of Woodman’s Point which he named Clarence, in honour of the Duke of Clarence.

* The settlement at Clarence was a disaster but the colonists were not allowed to move until the arrival of the Rockingham (427 tons) which had been delayed. It arrived in heavy weather on the afternoon of 13 May 1830 and ended up wrecked on the shore.

* By August, 1830 the remnants of the settlement on Cockburn Sound were calling themselves 'Rockingham Town'.

* In 1847 the town of Rockingham was officially gazetted.

* By the 1850s a small number of families had settled on the lands to the west of the townsite and by 1868 there were eleven families in the district.

* In 1868 a jetty was built near the town so the Rockingham Jarrah Company could load timber and ship it out of the area.

* By 1872 the company had built a sawmill, a jetty at Rockingham, and a railway linking the mill to the jetty. For a brief period Rockingham became the most important port on the coast.

* The railway from Perth to Bunbury was completed in 1893 which resulted in much of the produce from the area being transported either to Perth or Bunbury.

* The Inner Harbour at Fremantle was completed in 1897 and this led to the decline of Rockingham as a port. By 1908 the Rockingham port had been closed.

* By the 1920s Rockingham started to become a popular seaside resort for holidaymakers from Perth.

* The establishment of Kwinana as an industrial port in the 1950s and the development of the Naval Support Facility (Fleet Base West HMAS Stirling) at Garden Island in the 1970s led to the town being revitalised.

* Today Rockingham is a pleasant day trip from Perth. It has a charming beachside ambience which makes it a delightful, relatively quiet, town removed from the more urgent lifestyle of the centres which lie to the north.

The Rockingham Visitor Centre has its own website with good information about accommodation and eating in the area. Check out http://www.rockinghamvisitorcentre.com.au/ 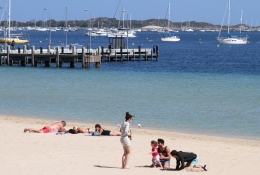 The beach at Rockingham 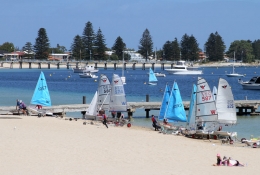 Sailing boats near the jetty at Rockingham Beach 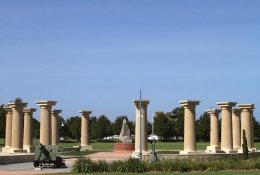 The impressive War Memorial at Rockingham 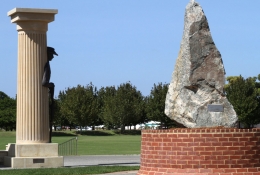 Statue of a soldier guards the plinth at the centre of the Rockingham War Memorial. 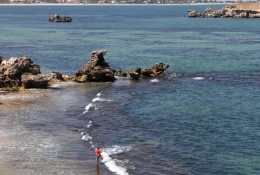 The view from Point Peron across to Seal Island and Shag Rock. 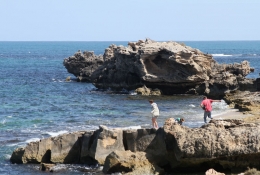 The jagged rocks at Point Peron. 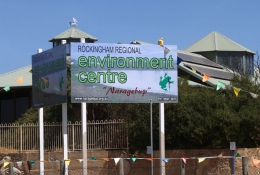 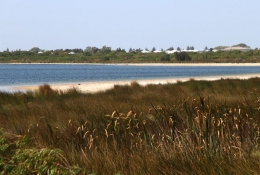 Lake Richmond is known for its birdlife