Rockley is one of those rare country towns where nothing much seems to have changed for over a century. It has a delightful park beside Pepper's Creek; a beautiful old red brick mill; a pub and a few houses. It is as though nothing has changed and, as such, it has an admirable ambience of peace and serenity. Not surprisingly it has been listed by the National Trust as an Historic Village.

Rockley is located 232 km west of Sydney via the Great Western Highway across the Blue Mountains to Bathurst. It is 35 km due south of Bathurst on the Rockley Road.

On 21 February, 1829 Governor Darling granted 1,920 acres (777 ha) in the area to Captain Watson Augustus Steel who named his property 'Rockley' after his birthplace in Wiltshire, England.

Abercrombie Shire Council Building
Many people believe that Ben Chifley, the humble railway engine driver from Bathurst, was the last "man of the people" Prime Minister Australia ever had. Certainly he was a tireless worker for the public good. For three years, from 1937-1940, he drove across from Bathurst once a fortnight to preside over the Abercrombie Shire Council as its president. The Shire Council building still stands - a handsome reminder to a man whose only desire was to serve his constituents - on the hill in Hill Street.

Rockley Mill and Stables Museum
The Rockley Mill in Budden Street is a striking building. Built out of warm, red brick in 1864 it dominates the town's streetscape standing on the rise across the road from Pepper's Creek. The Mill was built in 1864. It has displays of historic mill machinery, historic clothing, old police records for the district and old newspapers. It is open from 11.30am - 4.30pm on Sundays and Public Holidays. For more information tel: (02) 6337 9279. For more information check out  https://www.rockleymillandstablesmuseum.com.

St Patrick's Roman Catholic Church (1870) and St Peter's Anglican Church (1867)
M. E. (Edward) Gell was a prominent local architect in Bathurst who not only designed both of Rockley's churches but also was responsible for a number of important buildings in Bathurst and, idiosyncratically, the gates of Bathurst Gaol. Gell's design for St Patrick's Church uses local rubblestone, employs a slate roof and is a fine example of a High Victorian Gothic style church. In the design of St Peter's Gell used decorative brickwork which he combined with a slate steeple and an iron roof.

Exploring the Town
There are a number of places of historic interest beyond the churches and the shire council offices. Of particular interest are the local Post Office (1879) which did not open for six months after its completion because the furniture and fittings were not transported from Bathurst where they had sat on the railway station. The Club House Hotel (1872), the Butcher's, Baker's and Saddlery (1871), the former Bank of New South Wales (1878) which was once held up by the bushranger Ben Hall, the Methodist Church (1859), the School of Arts (1890) and the Police station. Ask at the Museum for specific details.

Stephens Park
The park near the weir on Peppers Creek has a delightful English village green ambience. It is idyllic and practical having grassy area, shade trees as well as barbecues and the pools in the creek are safe for swimming.

* Prior to European settlement Rockley was part of the vast lands of the Wiradjuri people who spread from Nyngan to Albury and Bathurst to Hay.

* The first European into the Rockley district was Surveyor George Evans who crossed the Blue Mountains in 1813.

* By 1818 land was granted to William Lawson - one of the trio, along with William Charles Wentworth and Charles Blaxland, who crossed the Blue Mountains in 1813.

* The townsite was held as a stock reserve until the 21 February, 1829 when Governor Darling granted it as part of a parcel of 1,920 acres, to Captain Watson Augustus Steel who named it 'Rockley'.

* Copper was found south of the town and the Summer Hill Copper Mine was opened in 1848. It had closed by the end of the 19th century.

* The town of Rockley was officially gazetted in 1851.

* The discovery of gold in the area in the late 1840s drew prospectors and by the 1860s the town had a population of around 3,000 people. This prosperity is reflected in the churches and public buildings.

* On 24 October 1863 the bushranger Ben Hall and his gang arrived at the home of Harry Keightley at Dunn's Plain near Rockley. Keightley did not surrender and in the gun battle that followed one of Hall's gang members, Mickey Burke, was killed. Keightley was captured by Hall who forced Keightley's wife to ride to Bathurst and claim the £500 reward for killing Burke.

* Around the turn of the century the copper mine closed and the population of the town declined. The result is near-perfect preservation which has resulted in the whole village being listed by the National Trust.

Rockley does not have its own visitor information centre. The closest is the Bathurst Visitor Information Centre, Great Western Highway, tel: 1800 68 1000.

There is a lot of useful information at https://www.rockleymillandstablesmuseum.com. 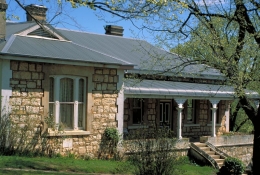 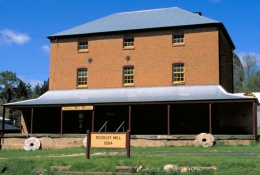 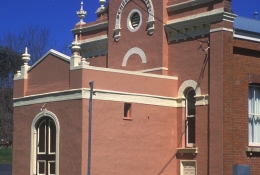 Rockley School of Arts (1890) just up the hill from the Council building. 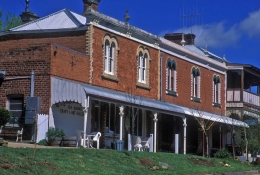 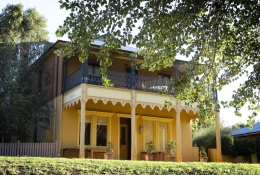