Today Rokeby is a suburb of Greater Hobart. It was linked to the city when the Tasman Bridge across the Derwent River was completed in 1965. The first European settlement of the area occurred as early as in 1808, just four years after the establishment of Hobart Town. Today its primary appeal is the historic St Matthews Church (turn north into Mockridge Road) which was completed in 1843 and contains the grave of Van Diemen's Land's first Church of England chaplain.

Rokeby, now part of suburban Hobart, is located 16 km from Hobart via the A3 and Southern Arm Highway.

Rokeby takes its name from Rokeby House (built in 1840) which was named by George Stokell, a prominent builder and merchant, after the parish of Rokeby in the North Riding of Yorkshire in England. Rokeby is located on Clarence Plains which were named after a ship, the Duke of Clarence.

Old Rokeby Historic Trail
If you want to explore historic Rokeby the best source is probably the Old Rokeby Historic Trail which offers a map and detailed descriptions of the 15 places of interest. Check out http://members.optusnet.com.au/~tacplaci/rokeby.html. Written as part of the Centenary of Federation Community project, it is a mix and match of actual buildings and the sites of suitably significant places.

Today there are only a few buildings which can be observed:

1. Rokeby Watch House - Located on Hawthorne Place the Watch House (c. 1850) is now a private home. The  Watch House has been used as a police station, courthouse and gaol with three cells. The single-storey, sandstone, Gothic-style building features a central double-storey section.

4. Old Schoolhouse - Located at 3 South Arm Road the small cottage with the picket fence was the Clarence Plains School in the 1860s and the building next door, which dates from the 1880s, was the Rokeby State School until 1944

13. St Matthews Church
Rokeby’s first church service was held in 1821 by the Reverend Robert (known as Bobby) Knopwood who was the first Church of England chaplain in Van Diemans Land. The foundation stone St Matthews Anglican Church was not laid until June 1840. The church, in what can be described as Victorian Academic Gothic style, was designed by convict architect James Blackburn and was dedicated by Bishop Francis Russell Nixon in September 1843. Inside the church is an organ which was built by John Gray, of New Road, Fitzroy Square, London in 1824 for St David's Church, Hobart, and first used for services on 15 May 1825. It was built under the superintendence of George Cooper, organist of St Sepulchre's Church, London. In June 1857 a new organ for St David's, built by Bishop & Starr of London, arrived in Hobart. The Gray organ was moved to St Matthew's where it was installed by J. Pollard in August 1857. There are also some chairs which were carved from wood used in the ships in Nelson's fleet. The church and the graveyard are located in King Street just off Mockridge Road.

Monument to Reverend Robert Knopwood
In the graveyard at St Matthews is a monument to Robert Knopwood which reads: "Sacred to the memory  of the Revd Robert Knopwood A.M. who died 18 September 1838 aged 77 years. He was the first Colonial Chaplain in Van Diemen's Land having arrived in Feb 1804 with Lieut Governor Collins. He was a steady and affectionate friend. A man of strict integrity and active benevolence ever ready to relieve the distressed and to ameliorate the condition of the afflicted."

* Prior to the arrival of European settlers the district around Rokeby was home to the Nuennone Aboriginal people.

* Numerous European explorers sailed up the Derwent River from the late eighteenth to the early nineteenth century.

* The explorer John Hayes named the district Clarence Plains in 1794 after he had sailed the Duke of Clarence up the Derwent.

* Europeans began settling the Rokeby area as early as 1808 - only four years after the arrival of David Collins in Hobart in 1804. Many of them came from Norfolk Island. Some were ex-convicts.

* By 1818 the Chequers Inn was serving patrons in Rokeby.

* In 1826 Rev Robert Knopwood was appointed to the Parish of Clarence Plains.

* The township of Rokeby was laid out in the early 1830s.

* By 1833 the highly regarded Horse and Jockey Inn was serving patrons.

* A watchhouse was built at Rokeby around 1840. It has variously been used as a police station, courthouse and gaol.

* The historic St Matthews Church (turn north into Mockridge Road) was completed in 1843.

* In the 1950s the road to Hobart was sealed. Previously it had been a dirt road.

* On 7 February, 1967 - the day known as Black Tuesday - fire raged through the Rokeby district killing two men and burning historic houses, including Clarendon, Bayview, The Pines and the Congregational Chapel to the ground.

There is no Visitor Information Centre in Rokeby.

There is no specific Rokeby website although http://members.optusnet.com.au/~tacplaci/rokeby.html does provide useful information about the history of the suburb. 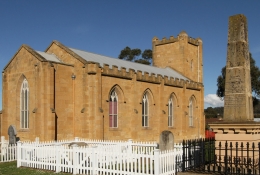 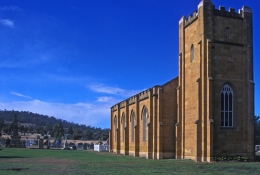