Zinc, lead and gold mining town in the wilds of western Tasmania

Rosebery is a mining town which sprawls up Mount Black. The town wasn't settled until gold was discovered in 1893. This was largely due to the inaccessibility of the entire West Coast where the combination of dense forests, the relentless Roaring Forties and undergrowth with its leeches and dense scrub, made travelling through the area difficult. In 1893 a gold prospector named Tom McDonald reached Mount Black and staked out the claim which over a century has grown into a substantial mining operation which today employs over 480 people - mostly locals. The attractions of Rosebery include interesting displays relating to the town's mining history and some  walks through the dense forests to the volcanic mountains and the impressive Montezuma Falls.

Rosebery was named after the Rosebery Gold Mining Company which had, in turn, been named after Archibald Primrose, 5th Earl of Rosebery who was Prime Minister of Britain in 1894-1895. The company was founded by Tom McDonald who found gold on Mount Black in 1893.

The Mine
There used to be a time when visitors could inspect the mine. Now, with complex OH&S regulations, all the visitor can do is view the operation from afar; admire the old aerial bucket ropeway which crosses the main road on the Burnie side of town; and inspect the interesting exhibits at the Rosebery Heritage Centre which include picnic seats (with good views over the town) which were made from "redundant underground man cars".

The MMG website explains the current operations: "MMG Rosebery is an underground polymetallic base metal mine located in the township of Rosebery in Tasmania. The operation ... has operated continuously since 1936 with current mine life extending to 2024. The mine is an integral part of the community and the majority of Rosebery employees are local to the area. Zinc, lead and copper concentrate and gold dore is produced at Rosebery using mechanised underground mining methods and crushing, grinding and flotation processes. The polymetallic nature of the ore body presents a cost advantage through the sale of by-products. Rosebery concentrates are transported by rail to the Port of Burnie where they are shipped in bulk carriers to smelters in Hobart and Port Pirie. Gold dore bars are sold to a reinfery in Australia where they refined into gold bullion. 2014 Production Guidance for Rosebery is 80,000 - 85,000 tonnes of zinc in zinc concentrate and 22,000 - 24,000 tonnes of lead in lead concentrate." For more information check out http://www.mmg.com/en/Our-Operations/Mining-operations/Rosebery.aspx. The mine is a closed site although occasional open days are held.

The Geology of the Area
The ore in the Rosebery area is a complex of metal sulphides which contain lead (galena), zinc (sphalerite), copper (chalcopyrite), silver (tetrahedrite and electrum), gold and iron. It is contained in a host rock of fine-grained sediments which were laid down in an active volcanic region, known as the Mount Read volcanics about 600 million years ago. The ore runs 2 km in a north-south direction to a depth of around 1.7 km. It can be mined until 2024 at least.

The Mine Operations
The Rosebery mine uses a mechanised underground mining method called open stoping to extract ore from up to 1.8 kilometres below the surface. The underground mine consists of tunnels, called declines or ramps, that provide access from the surface to areas below. Holes are drilled into the rock face, charged with explosives and blasted to loosen the rock. The blasted rock is then removed by a loader and hauled out using 55-tonne trucks. The stopes are then filled with waste rock to prevent cave-ins.

Processing Operations
The ore, which has been brought to the crushers, is ground to less than  0.1 mm. The fine grains of zinc, lead, copper, gold and silver are separated. Gold is the first mineral to be recovered from the ore slurry using a centrifugal gravity separator. Copper, lead and zinc are then recovered by a process called froth flotation. Chemicals or reagents are used to make these minerals water repellant so they attach to air bubbles introduced into the slurry of finely ground ore particles and water. The remaining waste material, referred to as tailings, is pumped to a tailings storage facility.

The Underground Man Cars
Located at the Rosebery Heritage Centre are some unique picnic seats made from Underground Man Cars. A sign explains that "this is a place to sit and contemplate the lovely views of Mount Murchison, Mount Black, Mount Read and the surrounds of Rosebery" and that the idea to place the Man Cars was that of Joe Sucic and it became the dream of Christine Winskill at MMG Rosebery Mine. Enjoy the experience of having lunch on a Man Car.

Hercules to Rosebery Aerial Ore Bucket Ropeway
Constructed to move ore from the Hercules mine to Rosebery this elaborate aerial ore ropeway remained in use until 1986. The remnants of this highly unusual method of ore transportation can be seen crossing over the road on the outskirts of the town.

The Parks and Wildlife Service website describes the 3 hour return (4 km one way) walk as being easy and following the route of the narrow two feet wide, historic North East Dundas Tramway. They describe the appeal of the walk as "Walking from Williamsford, the track is almost entirely through pleasant and open park-like rainforest. This includes leatherwood, myrtle, sassafras, giant tree ferns and eye-catching fungi. You’re sure to get close to several different birds along the way, notably White’s thrush, which is a medium-sized and speckled brown and white ground dwelling bird. It forages quietly on the rainforest floor and, when disturbed, flies only a short distance before settling again, enabling you to get a second look." Check out http://www.parks.tas.gov.au/?base=1374 for more details.

Mount Read
Mount Read is 1588 m above sea level and offers excellent views of the entire area. The walking route is actually a road which is about a kilometre south of Rosebery and which heads up the hill to "a forest of communication towers". It offers excellent views down on Rosebery and, on a very clear day, it is possible to see as far as Macquarie Harbour in the south. It also has interesting signage about the history and geology of the area. Check out http://bushwalk.com/forum/viewtopic.php?f=42&t=10900 for details and a very useful collection of comments from people who have walked the route.

Mount Murchison
The excellent Bushwalk Australia (check out http://bushwalk.com/forum/viewtopic.php?f=3&t=340) describes the walk: "Commences from a few metres south of a track sign on Anthony Road near pole D15 and follows up the ridge through forest, including tall tea trees and then emerges into the open with head high bushes gradually diminishing in size to waist level before turning north westerly and ascends cross slope. It involves several scrambles up rocks. Eventually steepness lessens before a clamber over a small rocky crest to reveal the central bowl of Mt Murchison and the final short climb on the sloping rock face to the summit. The track is in good condition and takes 2 hours 15 minutes up and about 2 hours on return." Mount Murchison rises to 1275 m but is a difficult walk. Most walkers follow the power lines to the saddle of the mountain from where a track leads to the top. The mountain is commonly covered in snow in winter time and, like all mountains in the area, is prone to dramatic and very rapid seasonal changes.

Mount Farrell
Bushwalk Australia's website http://bushwalk.com/forum/viewtopic.php?f=42&t=4120 describes the walk in detail. Check it out. Mount Farrell is only 712 m above sea level but it does offer excellent views across Lake Mackintosh and Mount Murchison.

* Prior to the arrival of Europeans the area around Rosebery had the home to the Peerapper Aboriginal language group for tens of thousands of years.

* In 1893 a gold prospector named Tom McDonald reached Mount Black and staked out a claim which became the mine which still drives the economy of Rosebery.  He also discovered boulders of lead/zinc sulphide in a creek.

* Rosebery was named after Tom McDonald's company, the Rosebery Gold Mining Company which began to work Mount Black almost immediately. A frontier mining town immediately sprung up. The locals describing it as "a village built on the muddy slopes of Mount Black ... with another village on the boggy peat soil to the south of the Primrose mine."

* Between 1893-1936 the mines operated according the price of the metals and the economic viability of the minerals.

* By 1899 the privately owned Emu Bay Railway from Burnie had reached Rosebery and was providing access to the port.

* In 1920-21 the Electrolytic Zinc Company purchased the mines in the district, built houses for the mine workers, and invested in an elaborate aerial ropeway to move ore from the Hercules mine to Rosebery.

* The current Rosebery lead, zinc and gold dore mine started operating in 1936.

* In 2014 only lead was being extracted by the MMG who were employing 487 people including contractors.

The Rosebery Heritage Centre on the Murchison Highway has placards and signs outside which should be helpful. The closest information centre is West Coast Visitor Information Centre, Strahan, tel: 1800 352 200. 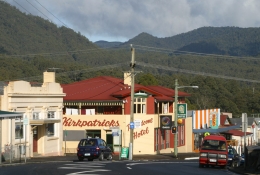 The steep main street of Rosebery. 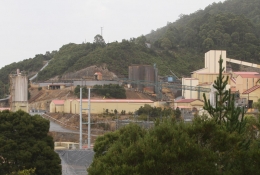 The MMG mining operation at Rosebery 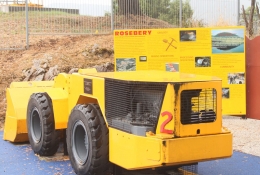 The information board and equipment outside the Rosebery Heritage Centre. 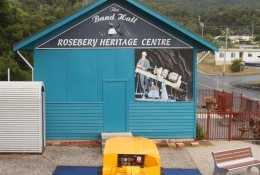 The Rosebery Heritage Centre at the top of the town's main street. 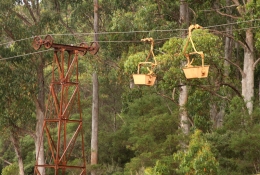