Historic town on the Tamar River north of Launceston.

Rosevears is an attractive village on the western shore of the Tamar River. The main appeal is the village's location on the drive from Launceston along the shores of the Tamar. On the way there are wetlands which attract birdlife including black swans and at one point the Matthew Brady Lookout, once a secret location for a local bushranger, offers outstanding views across the Tamar Valley.

Rosevears is located 18 km north of Launceston on the West Tamar Highway. It lies on the western shore of the Tamar River.

It probably should be called Rosevear's Tavern. The origin of the name is that when the tavern, which was named The Rose Inn, was licensed in 1831 the publican was William Henry Rosevear.

Brady's Lookout
Matthew Brady (1799-1826) was one of Van Diemen's Land's earliest bushrangers. He was transported to Macquarie Harbour in 1823 but escaped and in 1824, with a small group of fellow convicts, sailed to the Derwent River. For two years he operated as a bushranger and was so successful that by the time he was captured he had 100 guineas on his head. A few kilometres west of Rosevears on the West Tamar Highway is a clearly signposted place named Brady’s Lookout. It is claimed that from this vantagepoint Brady used to spy on potential victims on the road below. It now offers a superb panoramic view over the Tamar Valley.

Exeter Methodist Church
Located 9 km north of Rosevears, downstream on the Tamar River, is the small village of Exeter where the only attraction is the Methodist Church, a handsome timber building, which, having been completed in 1861, is the oldest Methodist Church in Tasmania. It is not an impressive building however it is significant to the religious history of Tasmania.

* Prior to the arrival of Europeans the area around Rosevears was inhabited by the Tyerrernotepanner people who were the dominant group in the Tasmanian north midlands.

* By the 1820s there was a small shipbuilding industry operating from near the present-day site of Rosevears. At this time the shipyards were known as Battery Point and Cimitiere's Point.

* One of the shipyards was owned and operated by a sea captain named George Plummer. It was Plummer who built the Rebecca, the boat which carried John Batman across Bass Strait to Port Phillip in 1835 and led to the creation of Melbourne. There is a plaque commemorating the event.

* Today Rosevears is a popular place for people who have either retired or want to live outside of Launceston.

There is no specific website for Rosevears. There is a small history entry in the George Town & District Historical Society newsletter. Check out http://www.gtdhs.com/NL89May11.pdf 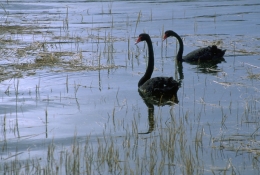 Black swans on the edge of the Tamar River. 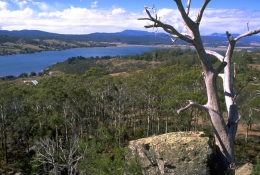 Looking up the Tamar Valley from Brady's Lookout 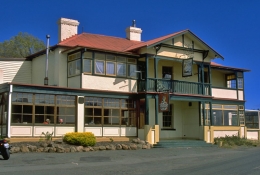