Town noted for the largest wooden Catholic Church in Australia

Rosewood is a small town which lies between Brisbane and Toowoomba. It is essentially a service centre for the surrounding mixed farming area. Visitors will find that it has a number of impressive timber buildings including St Brigid's Catholic Church (the largest of its kind in Australia), the unusual Rising Star Hotel and the elegant Edwardian home, Glendalough.

Rosewood is located 61 km south-west of Brisbane and 61 m above sea level.

The town was named in the 1870s after the Rosewood tree (acacia harpophylla) which grew in the surrounding scrub at the time.

The church has a nave and two side aisles each of which is characterised by a separate cross and gabled window. Inside are a number of unusual frescos - one has the symbols of grain (bread) and grapes (wine) with the inscription 'O memoriala mortis domini' (In memory of the death of our Lord) while the other depicts angels and was painted in 1935.

The Heritage Register records: "The interior of the northern wall was improved for the 1935 Jubilee Celebrations. Three stained glass windows by RS Exton & Co of Brisbane, and flanking murals on fibre supports by the important Queensland artist, William Bustard, were added.  A scroll on the diagonal boards of the lower central section of this wall was probably painted about this time."

Other features include the pressed metal ceiling, the altar which is made of wood but has been painted to look like marble, and the statues of the three saints - St Brigid, St Agnes and St Philomena. There is a very extensive description of the church on the Queensland Heritage Register site. Check out https://heritage-register.ehp.qld.gov.au/placeDetail.html?siteId=15511.

Rising Sun Hotel
Located at 27 School Street is the interesting Rising Sun Hotel which was built in 1908 and still retains its unusual corner roof turret and its elaborate veranda and awnings. It was designed by Ipswich architect, Will Haenke. It is a 1908 version of a Rising Sun Hotel which had originally been located at the bridge across the Bremer River and had operated as the local Cobb & Co coach stopping point. The current building was operated originally by the Sloane family until the 1970s and achieved local fame not only because, during the Great Depression, the Sloanes operated a soup kitchen on the back veranda, but it was also the home for a variety of local business people including the local doctor, chemist, bank manager and dentist.

Glendalough
Adjacent to the main roundabout on the corner of Langfield Road and John Street is 'Glendalough', a gracious timber house built in the early 1900s with additions in the 1910s, which is a superb example of the opulence of the local merchants of the time. It was built for Thomas Ernest Bulcock, a prosperous local storekeeper. The Queensland Heritage Register describes the building as "Glendalough is important in demonstrating the principal characteristics of a substantial, early 20th century timber residence of a wealthy and influential local citizen, designed to impress, which employs decorative timberwork, design elements which accommodate the warm Queensland climate - including wide verandahs on all sides and a well-ventilated summer sleeping pavilion - and a substantial garden.  The layout of the large formal entertaining areas provides evidence of the social standing of its original inhabitants, and of the building." It started as a five room cottage and eventually became a twelve roomed house with an octagonal summer room. For a detailed historical and architectural description of the building check out https://heritage-register.ehp.qld.gov.au/placeDetail.html?siteId=15510.

Rosewood Railway Museum
The Rosewood Railway Museum is located 6 km from Rosewood at 57a Freeman Road, Ashwell. Head out of town on John Street and follow the signs. It has an extensive range of diesel, steam and electric locomotives and rolling stock and is open seven days a week. It runs steam trains on the last Sunday of each month. Check out http://www.arhs-qld.org.au/rosewood-railway-museum for times, prices and details. The website describes the journey: " The restored route climbs a spur of the Little Liverpool range providing 180° scenic views from Mt Flinders to the Great Dividing Range while visitors experience all the sights, sounds, and atmosphere of an authentic historic steam train journey." The journey traverses the district between Cabanda and Kunkala. It also has an "Engine Driver Experience" where a visitor can learn to drive a steam locomotive and be presented with a certificate. For general enquiries tel: (07) 3252 1759, Tuesday - Thursday from 10.00 am - 3.00 pm.

* Prior to European settlement the district was occupied by Aboriginal people from the Yuggera language group.

* The town came into existence when the railway from Ipswich to Grandchester was built during the 1860s.

* It became a stopover point on the rail line for the next twenty years.

* In the 1880s coal was discovered in the area and in 1881 the Walloon-Rosewood coalfield started operation. Around this time dairying and mixed farming were prospering on the rich soils.

* In 1910 St Brigid's was officially consecrated and the first mass held.

* In 1912 a branch railway line was established connecting Rosewood to Marburg.

* A coal mine west of Rosewood stared production in 1918.

* In 1988 the Rosewood historic railway was opened to the public.

* In 2013 the New Oakleigh Coal Mine, the last near the town, closed down. 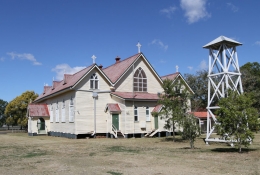 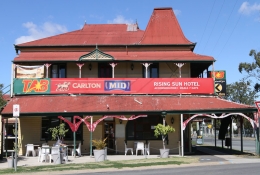 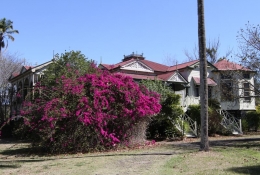 Glendalough (1910) a typical Queensland home of a prosperous local businessman 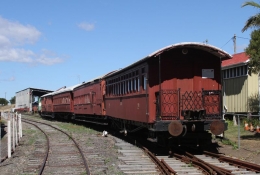 Part of the rolling stock at the Rosewood Railway Museum.