Located only 8 km north of Gawler, Roseworthy is a tiny town with a single purpose: it is the home of Australia's first agricultural college, the Roseworthy Agricultural College. In recent times the college has become a campus of the University of Adelaide. It is open to the public and visitors can inspect the buildings - most notably the excellent college chapel and the original 1883 College Hall.

Roseworthy is located 60 km north-east of Adelaide and 8 km north of Gawler.

In 1855 W. H. Gartrell purchased land in the district. His widow, Mrs Grace Gartrell, laid out a small township in 1867 and called the town Roseworthy after the village where she was born in Cornwall. The Cornish name is Roswartha meaning Meadow Heath.

University of Adelaide - Roseworthy Campus
Located only 10 km north of Gawler, Roseworthy College campus was created with a plan to develop a model farm. The idea was that the College would be an extension of the University of Adelaide and would be run by a Professor of Agriculture. In 1882 John Daniel Custance took up the professorship and in 1883 the college's Main Building was completed. The college's centenary publication in 1983 explained that: "The College encompasses approximately 1,200 ha of land, most of which is used as a teaching and demonstration farm. There are about 500 ha sown to wheat, barley, oats, oilseed and medic crops, with 10 ha of orchard, vineyard and vegetable garden. The farm also carries sheep, Poll Shorthorn beef cattle, Jersey and Friesian dairy cattle, pigs, poultry, and representative range of both light and heavy horses, and some Angora goats ... Roseworthy also has a teaching winery (which includes a distillery) of 150 tonnes production capacity ... The College produces a range of table wines, sherries, ports and brandies."
By 1905 there was a formal affiliation between the college and the University of Adelaide and in 1991 the college formally merged with the university and became known as the University of Adelaide Roseworthy Campus.

Roseworthy College Walking Tour
There is a downloadable 14 places College Walking Tour which can be accessed at https://www.adelaide.edu.au/uni-collections/tours/UC_Roseworthy_Campus_Walking_Tour_PRINT_2018.pdf. It includes a detailed map and clear instructions on how to reach the points of interest on the campus. Of particular interest are:

Roseworthy College Hall
Roseworthy College Hall is the most impressive building on campus. It was built between 1883-1884 to a design by Edward J Woods, Chief Architect from the Department of Public Works, and constructed of Tarlee stone and red brick with freestone mouldings and brick quoins and chimneys. It cost £7,625 and contained accommodation for residential students, a lecture room, dining hall, reading room, staff room and offices. A laboratory was added in 1891. The building includes a clock tower which lacked a clock mechanism for over 120 years. In 2003 a Swiss precision clock that adjusts automatically by a global positioning system connected to Greenwich Mean Time was added.

The Bust of John Ridley Bust
In front of the College Hall stands a bust of John Ridley (1806–1887), the man who invented the Ridley Stripper which was hugely important to the wheat industry. The bust was sculpted by Barsanti of Pisa, Italy.

Memorial Chapel
The College's Memorial Chapel was constructed in 1955 after a competition for the design of a non-denominational Memorial Chapel to commemorate students who served and died during the Boer War and the two World Wars. Dean, Berry and Gilbert were the winning architects. The walls are constructed of Mallee limestone, the roof is red terracotta. Above the Chapel entrance is a Waikerie limestone sculpture by John Dowie depicting a young warrior discarding his uniform in readiness to return to the land.

Roseworthy Agricultural Museum
Located on the Roseworthy College Campus, on Mudla Wirra Road, the museum is open on Wednesdays from 10.00 am - 4.00 pm and on the third Sunday of each month from 1.30 pm - 4.00 pm. Tel: 0400 195 857 or check out http://community.history.sa.gov.au/roseworthy-agricultural-museum.
The museum was started in 1976 but it wasn't until 1989, when the Gawler Machinery Restorers Club took over, that the museum started to become a serious collector of agricultural equipment. An old dairy building dating from 1954 was used to house the collection. It was officially opened in 1992 with a collection which included displays relating to Dairy, Winemaking, Horticulture and local Agriculture. Today displays include a working half scale stripper made by J. G. Ramsay of Mt Barker and first exhibited at the 1878 Paris World Fair; a representation of  the James Martin ‘Phoenix Foundry’ in Gawler; a working model of a 1908 Saunderson tractor, the first tractor used in South Australia at the Roseworthy Agricultural College; an operating 1920 Holt 45 tractor as well as other working tractors, engines and agricultural machinery. Entry is free.

* By 1869 a rail link connecting Morgan, Gladstone and Terowie was passing through the town.

* In 1881 the government purchased land to build a college.

* The Roseworthy Agricultural College which was established in 1883 as the first agricultural college in Australia.

* In 1905 the College established a formal relationship with the University of Adelaide.

* In 1976 the Roseworthy Agricultural College started a museum.

* In 1991 Roseworthy College formally merged with the University of Adelaide.

* In 1992 the Roseworth Museum was officially opened.

The official local website can be accessed at https://www.light.sa.gov.au/roseworthy. 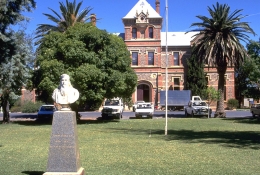 Roseworthy College with John Ridley’s statue in the foreground 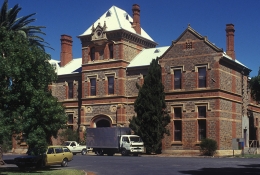 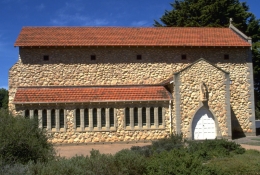