Reputedly the most beautiful historic town in Tasmania.

There are many beautiful, historic towns in Tasmania but few compare with Ross. It is arguably the most beautiful of all the island's 19th century colonial towns. Places like Campbell Town and Richmond are justifiably famous for their historic buildings, gift shops and attractive vistas but they do not compare to Ross which, apart from having one of Australia's most impressive bridges, has a special quality because it has not been overrun by tourism. In many ways the town is very typically English and, with its warm Ross sandstone, is reminiscent of the towns which can be seen in the Cotswolds or in north Oxfordshire. It is a town which is beautifully preserved and as such needs to be savoured in a leisurely way. Its quiet ambience is truly timeless.

Located on 76 metres above sea level, the beautiful town of Ross is 121 km north of Hobart and 81 km south of Launceston on the Midland Highway.

The location of Ross was chosen by Governor Lachlan Macquarie on his second journey through the island in 1821 (he had been before in 1811). He liked the location beside the river and he decided that the new settlement should be called Ross after the name of the home of his friend H.M. Buchanan who lived on Loch Lomond in Scotland.

Ross Bridge
The highlight of any visit to Ross is a the remarkable stone bridge which was built by convicts in 1836. It is the third-oldest bridge in Australia (the bridge at Richmond in Tasmania and Lennox Bridge at Glenbrook in New South Wales pre-date it) and is a fine demonstration of the exceptional skills of convicts. The bridge was designed by John Lee Archer and constructed under the orders of Lieutenant Governor Sir George Arthur. The stonemasonry and carvings, described by experts as "'possibly the richest achievement of the earlier colonial period if not the most significant sculpture on any edifice in the Commonwealth." were the work of Daniel Herbert and James Colbeck. They were both stonemasons. In the case of Herbert, who is credited with most of the stonework, he had been sentenced to death for highway robbery. The sentence was commuted to transportation for life and he arrived in Hobart Town in 1827. Almost immediately he started working as a stonemason and by 1835 he was employed as an overseer to stonemasons. Herbert was recommended by the principal superintendent of convicts to go with James Colbeck and work on the Ross bridge. The Australian Dictionary of Biography records: "The bridge was completed in July 1836. It contained 186 keystones or voussoirs carved by Herbert, or completed under his supervision, in fifty-six weeks between May 1835 and July 1836. Various interpretations of their curious motifs have been put forward, including claims that the many carved heads were portraits of Herbert and his wife, Jorgen Jorgenson (another convict), Lieutenant-Governor (Sir) George Arthur and other colonial officials and local personalities. Herbert was freed after the bridge was completed, spent the rest of his life in Van Diemen's Land, died in Campbell Town in 1868 and is buried in the Old Cemetery at Ross. Leslie Greener, who discovered that Daniel Herbert was responsible for the carvings, has written: "Ross Bridge is the most beautiful of its kind today. The carvings have in them that delight in the shapes themselves that our sculptors lost somewhere in the 13th century."

Ross Female Factory Site
Located on Church Street, the Ross Female Factory Site was originally used as a male road gang station. Between 1848-1854 the buildings were used as a probation station which housed between 60 and 120 women at any one time, as well as accommodating the inmate's babies.  It operated as a hiring depot, nursery, probation and punishment station.

The prison was demolished in the 1880's leaving the foundations intact.  This has enabled archaeologists to carry out digs at the site.  Today the original Overseer's Cottage remains. It was re-modelled in the 1890's and became a Police Station and residence.  The Overseer's Cottage is open free to the public from 9.00am - 5.00pm daily. The archaeology of the site is well covered at http://www.parks.tas.gov.au/?base=7566 and there are signs recording the history of the site in great detail.

Walking the length of Church Street
There are around 40 historic buildings in Ross of which more than half, 22 in total, are located on Church Street. The sensible starting point is at the Wesleyan (Uniting) Church at the top of the street. Walking the length of the street is a very pleasant, and hugely informative, way to experience the town. Stop at the Visitor Information Centre, in the Wool Centre, and purchase a copy of the Ross Information Guide. Cost: a gold coin.

The first building beyond the church is the old Drill Hall which was used by the Light Horse Regiment just prior to World War I. Next door is a cottage which was used as the town's Army headquarters.

The Tasmanian Wool Centre is at 48 Church Street. It is open from 9.00am - 5.00pm Monday - Friday and 10.00am - 4.30pm on Saturday and Sunday, tel: (03) 6381 5466 it combines an area where woollen garments are sold with a history museum, wool exhibition, and the local visitor information centre. There are fine artistic examples of the uses of wool including a John Coburn wall hanging titled Tapestry Canticle (1966) and a sculpture of a sheep titled Primary Bind (1985) by Les Kossatz.

Beyond the Wool Centre is the Ross Memorial Library and Recreation Room which was built in the 1830s and was the local headquarters for the Royal Ordnance Corps. If you look carefully you can see the corps crest of three cannons on a shield carved above the door.

On the corner are:

The Crossroads or Four Corners of Ross
With a fine sense of humour the locals have called the main crossroads in town - at the corner of Bridge and Church streets - the corner of Temptation, Recreation, Salvation and Damnation. Temptation was the Man-O-Ross Hotel, Salvation was the Roman Catholic Church (Our Lady of the Sacred Heart), Recreation was the Town Hall and Damnation was the local jail. The field gun in the middle of the crossroads was actually used during the Boer War. Next to the church is a cottage which was the town's first post office and further along are the Scotch Thistle Inn (licensed in 1840) and its coach house. Beyond them is the Ross Post Office (1896). Look carefully and you will note a mounting stone to help people get on their horses and an old post box and a stamp vending machine.

Cross High Street and about halfway up the next block is an old rubble stone building which was built in 1830. It is a fine example of early colonial architecture. On the corner of Church and Badajos Streets is St Johns Church of England (1868) with an organ that more than 100 years old, some fine stained glass windows, an oak lectern and its unusual Caen stone pulpit.

Start walking back towards the Uniting Church on the eastern side of Church Street. There is 'Elphinstone' which dates from the 1830s; Macquarie House and Store (1840s); St John's Sunday school; Hawthorn Cottage (1910) and the Old Ross General Store. It is a superb collection of colonial buildings on a wide street edged by elm trees.

Fishing
Fishing is not permitted on either side of the Ross Bridge. The area is protected for swans and ducks. However other sections of the river are popular with anglers, particularly those trying to catch trout.

* Prior to European settlement the district was occupied by the Lairmairrener Aborigines.

* In 1807 the first Europeans arrived when the surveyor Charles Grimes travelled across the island from the north to the south and mapped sections of a river which became known as Macquarie River when Governor Macquarie, travelling through the district in 1811, decided to name it after himself.

* When Macquarie returned to Tasmania in 1821 he nominated the site for the town and named it Ross. At that time the river was forded but later in 1821 a wooden bridge was built.

* In the early years of settlement the government established a large farm in the district. It was over 20,000 acres and was used for agriculture and breeding of draft oxen. It was broken up in 1830 and sold off to private landholders.

* In 1826 Ross became the venue for the Van Diemens Land’s first agricultural show.

* In 1836 the elegant stone bridge was completed by convicts. Inevitably Ross became an important stopover point on the road between Launceston and Hobart. A garrison was established and it became a horse coach changing point.

* Today Ross survives on tourism. The town is regarded by many as the finest nineteenth century village in Australia.

There is a local website with a useful guide to historic accommodation in the town. Check out http://www.visitross.com.au/ 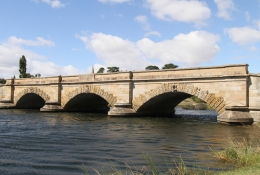 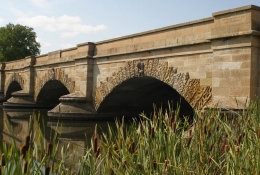 The Ross Bridge considered the most beautiful bridge in the country. 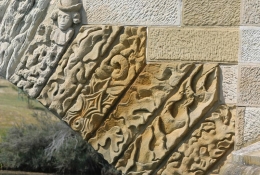 Detail of the carvings on the arches of the Ross Bridge. 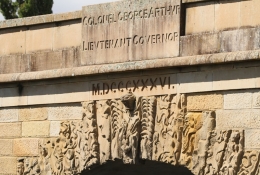 The keystones in one of the bridges three arches. 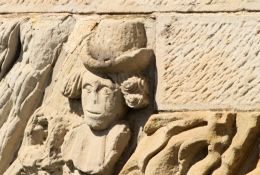 Detail of one of the cartoonish gargoyles. 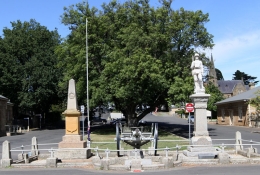 The view up Church Street from the War Memorial. 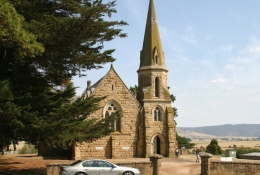 The Ross Wesleyan Church, now the Uniting Church, on the hill above the town. 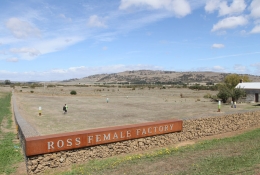 Where the Ross Female Factory once stood on the southern edge of Ross. 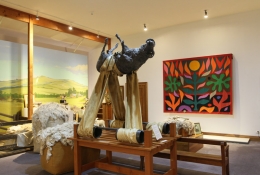