In the 1980s Roxby Downs was the most controversial town in Australia. The anti-nuclear lobby saw the town as a target for protests against uranium mining and the nuclear power industry. There were a number of widely publicised demonstrations near the site in 1983-84. Today Roxby Downs, originally the name of the local station, is a pleasant modern town which houses mine workers and their families. It is a classic modern mining town which provides its residents with all the amenities. Being purpose-built it has an attractive wide main street, good quality housing, pleasant streetscapes, a modern school, a cinema, shopping centre, sports facilities, a hotel motel and caravan park, and a wide range of public facilities including a police station, a TAFE college and a post office. The actual worksite at Olympic Dam is 15 km to the north and consequently the town looks modern but doesn't look like it is a mining centre. It has an average annual rainfall of 150 mm and the temperature in December and January has reached 48.5°C.

Roxby Downs is located 562 km north of Adelaide, 85 km from the Stuart Highway at Pimba and 259 km from Port Augusta.

Roxby Downs was, and still is, the the name of the local station on which the town was built. It is said that the first owner, Norman Richardson, named his property after the location in Queensland where his cattle had come from. The property was always very marginal. Richardson had 350 square miles on which he grazed only a few thousand head of cattle.

Tours of Olympic Dam
The Roxby Discovery Tour runs on Tuesday evening commencing 1.5 hours before sunset, between April and October only. The tour, which leaves from the Visitor Information Centre, runs for approximately 3 hours and includes a DVD presentation, an extensive look at the mine, a nature tour of the Arid Recovery Reserve. To make a booking tel: (08) 8671 5941 or check out https://www.roxbydowns.sa.gov.au/lifestyleandsport/visitor-information/attractions/roxbydiscoverytour which provides prices and additional information. The Visitor Information Centre explains that: "The Roxby Discovery Tour is designed to give visitors an insight into the workings of Roxby Downs, Olympic Dam and Arid Recovery. 'The whole Roxby experience'. It is the only tour that allows you access for a look behind the fence of the Olympic Dam Mine Site. Please note this tour does not enter the working part of the Olympic Dam Mine, it tours the external roads on the mine lease."

Emu Walking Trail
There is a pleasant 3 km walk around the town and across gently undulating sand dunes. On the route it is possible to see the native trees in the area, to view Olympic Dam mine on the horizon, and to see exactly what urban Roxby Downs in like. There is a brochure available at the Visitor Information Centre.

Public Art at Roxby Downs
There are five interesting pieces of community art which are worth inspecting.
Sturt Desert Pea Sculpture - Located on Richardson Place in front of the Roxby Downs Visitor Information Centre, this sculpture was created by artists Gary McMahon and Rachel Young, to commemorate the 20th anniversary of the Roxby Downs Township. More than 400 local young people contributed to the sculpture which was fabricated at the Roxby Downs TAFE. It was officially launched on 15 November, 2008.
Community Mural - Located in Richardson Place on the wall opposite Splashpad site, this ceramic tile mural was created as part of the 2013 Red eARTh Festival. It celebrated 25 years of the township of Roxby Downs.
Roxby Downs Multicultural Quilt – Located inside the Roxbylink Cultural and Leisure Centre, the community quilt was made in 2012 to tell the story of the community and the migrants to Roxby Downs. A total 28 women from 16 countries participated in the project.
Time Capsule - Located at the entrance of the Visitor Information Centre, the sculpture of a time capsule was commissioned by BHP Billiton in 2014.  The sculpture is an interactive snapshot of the first 25 years of Roxby Downs.
Rotunda - Located at the Richardson Place Crossing, the rotunda has elements of Multiculturalism, Sports and Music as well as featuring typical Roxby flora and fauna. It was repainted by the local school students in 2013.

Arid Recovery Reserve
Located 22 km from Roxby Downs (head north along Olympic Way for approx 10 km, continue through Olympic Dam township, then turn right onto the Borefield Road and follow for 12 km to the Reserve) the Arid Recovery Reserve is a 123 square kilometre fenced enclosure. The brochure explains: "Arid Recovery was initiated in 1997 and now provides areas of complete protection allowing the regeneration of native vegetation and the re-introduction of four locally extinct mammals (greater bilby, burrowing bettong, stick-nest rat and western barred bandicoot). There are now also up to 5 times as many naturally occurring small mammals inside the reserve compared to outside."

Arid Recovery Sunset Tour
This is a one hour sunset tour which runs before sunset from the Visitor Information Centre between April and October. Arid Recovery is located 22 km from the Visitor Centre and participants are expected to drive to the reserve. The website explains that the tour includes "a short interpretative walk with your tour guide to a viewing platform to see the diversity of Reserve habitats; an exploration of the dunes after dark to get up close to unique native animals; and on the return to spotlight nocturnal wildlife as you pass through stark arid zone woodland." As the native animals are nocturnal this makes sense for those who want to see them in their native habitat. Detailed information can be accessed at https://www.roxbydowns.sa.gov.au/lifestyleandsport/visitor-information/attractions/arsunsettour. Booking can be made by tel: (08) 8671 5941.

A Background to the Mining Operation
Vast mineral deposits were discovered in the area around 1975. They were not exploited until 1987-1988 when joint venturers, Western Mining Corporation (WMC) and BP Australia, estimated that at full capacity the mine would produce 45,000 tonnes of copper cathode, 1900 tonnes of yellow cake, 27,000 ounces of gold and 555,000 ounces of silver each year. By the late 1980s WMC had bought out BP Australia's interest in the mine and in 2005 BHP Billiton bought both the mine and the Roxby Downs pastoral station. Olympic Dam, originally nothing more than a waterhole on the Roxby Downs station, is now one of the biggest mining operations in Australia with BHP Billiton on record as believing the copper will last for the next 500 years.

* Prior to the arrival of Europeans the Kokatha Aboriginal people lived in the area.

* In 1910 Roxby Downs was established as a separate station.

* A dam was built on Roxby Downs station in 1956. It was the year of the Olympics in Melbourne and consequently it was named Olympic Dam.

* A huge mineral deposit was discovered in the Roxby Downs-Olympic Dam area in 1975.

*  After an initial expenditure of $750 million the township of Roxby Downs was built and mining began on the vast ore lode which covers an area of 7 km by 4 km to a depth of 1 km. A workforce of 800 was employed to exploit the estimated reserves of 450 million tonnes.

* The Olympic Dam operations were opened on 5 November, 1988 by the Premier of South Australia, John Bannon

* In 2012 BHP Billiton decided to restrict expansion of the Olympic Dam mine because of the price of copper.

* In 2017 BHP Billiton announced that they would undertake a $2.8 billion expansion of Olympic Dam.

* Today Roxby Downs is a single purpose town (over 50% of the population work at Olympic Dam) which has grown to include a supermarket, jeweller, community radio station, community hub and its own rugby football team. About 30% of the mine workforce fly in and fly out. They do not live in the town.

* BHP Billiton believe that, at the current rate of extraction, they have over 500 years supply of copper at the mine.

The local council has a useful website for visitors. Check out https://www.roxbydowns.sa.gov.au/lifestyleandsport/visitor-information/attractions. 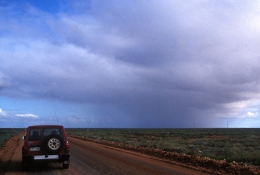 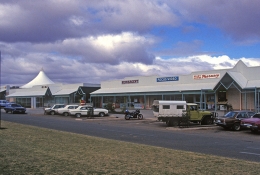 The shopping centre in the early 1990s 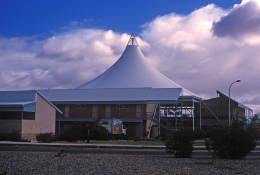 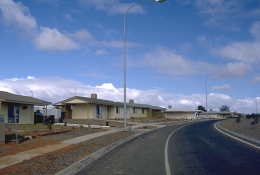 Housing in the early years of the development of Roxby Downs