There is something spectacular about Rushworth's main street. It is so wide and so elegant with historic buildings on either side and a huge median strip. It must be one of the most impressive main streets in rural Victoria. Today Rushworth is a service centre which was once a thriving and bustling goldmining town. It retains its original charm and is surrounded by interesting smaller goldrush towns. Visitors can easily spend a day marvelling at the mullock heaps and remnants of the goldrush era and exploring the tiny towns which once roared with with the sounds of men furiously digging and panning in hope of finding their fortune. Rushworth is known as 'the Gold and Ironbark town'.

Rushworth is located 181 km north of Melbourne via the Hume Freeway and Goulburn Valley Highway. It is 145 m above sea-level.

No one is sure why Richard 'Orion' Horne, a poet and friend of Charles Dickens who became a gold commissioner in Victoria, gave the town its name. One theory argues that he simply took 'rush', as in goldrush, and added 'worth'. Another theory suggests that when he sailed to Australia he befriended two fellow passengers named Rush and Worth. The early gold camp was known as Nuggetty.

High Street Heritage Walk
Rushworth's gloriously wide and elegant High Street, which came into existence in 1853, was declared an Urban Conservation Area of Special Significance by the National Trust in 1982. Today the best thing any visitor can do is take a walk along the street and carefully read the 'Walk Through Time' Community Project plaques on many of the buildings. They offer a unique opportunity to experience what the street was like in the heyday of the goldrushes. Start at:

Rushworth Museum
At the intersection of High and Parker Streets is the Rushworth Museum, located in the former Rushworth Mechanics Institute. The 'Walk Through Time' plaque explains that the building was constructed in 1913 to replace the original 1897 building. It was originally used as "a lending library for miners and tradesmen, the new institute also included a billiard's room surrounded by a raised platform for spectators." Today it is used by the Rushworth Historical Society and contains over 4000 items connected with local history. It is open on Saturday 10.00am.-noon and Sunday 11.00am-3.00pm. Check for details: http://rushworthmuseum.wordpress.com.

Other Building of Interest
* On the western side of High St, between Wigg and Parker Sts, are a series of old veranda shops with faded signage.

* At High and Parker is the former office of the Chronicle newspaper (1888).

* Just past the band rotunda are the first CBC Bank, the second CBC Bank (1883) and Cracknell's Bakery - all now private residences.

* On the other side of the road, on the corner of High Street and Wigg Street, is the Criterion Hotel (1856).

* The single-storey Imperial Hotel, now a bed and breakfast, dates from 1858 but was partly destroyed by fire in 1881. It been tastefully restored. .

Rushworth State Forest
Rushworth State Forest is a 33,000ha reserve south of Rushworth which consists of red gum, red ironbark, red stringybark, yellow gum and grey box eucalypts, mallee used for eucalypt production and, in spring, wildflowers and orchids. Today the forest fauna includes over 100 bird species, echidna, possums, kangaroos, wallabies and wallaroos. It is excellent for bushwalking although, extensively scoured for gold in the 19th century, it still attracts optimistic gold fossickers. There is a good downloadable brochure: http://www.dse.vic.gov.au/__data/assets/pdf_file/0017/101573/Heathcote_Rushworth_State_Forests_finalwithcolourmap.pdf

Whroo
Located 7 km south of Rushworth, along Whroo Rd, is Whroo Historic Reserve (500 ha within the 33,000ha Rushworth State Forest) now a ghost town and a reminder that once there was a bustling gold mining town which, at its peak in 1857, had a population of 2100 and 139 buildings. All that remains are wattles, wildflowers, peppercorn trees, wells, remnants of mines and grassy clearings. All the buildings have been removed.

The Whroo goldfield (the name probably comes from a local Aboriginal word 'wooroo' which meant either 'mouth' or 'waterhole') was discovered in 1853 in a gully near Balaclava Hill (it was named after the Battle of Balaclava in the Crimean War). The find was so rich it had 15-cm gold veins and yielded well over £1 million worth of gold. Visitors can peer into the 25-metre deep Balaclava open-cut mine on the hill although it should not be entered. South of the hill is the site of the mine owner's homestead. Four large pine trees remain from his 4-acre garden. A row of sugar gums marks the site of a mechanics institute where balls were held on moonlit nights (owing to the lack of electricity) from 1859 to 1955. The Whroo Cemetery contains the graves of over 400 people are buried and beside it is a signposted walking track that leads to an Aboriginal rock well.  Other relics include cyanide vats and a puddling machine. There are other signposted walking tracks. Check out http://parkweb.vic.gov.au/__data/assets/pdf_file/0006/315807/Park-note-Whroo-Historic-Reserve.pdf for a downloadable guide and map to the ghost town. It includes the walking tracks in the area.

Waranga Basin
Waranga Basin, located 8km north-east of Rushworth, was commenced in 1905 and completed in 1908 using picks, shovels and horse-drawn scoops. The water comes from the Goulburn Weir. It is a popular fishing destination. The main access road is the Tatura Rd. It takes you past the Waranga Western Channel which transports the water 180 km via gravity feed to the Mallee.

* Prior to European settlement the district was inhabited by the Nguraiillam-wurrung Aboriginal people.

Rushworth. he subsequently eulogised the pastoral potential of the region.

* By 1845 settlers had moved into the area and taken up land.

* By the 1850s Rushworth had become an important stopover for miners travelling from the Bendigo to the Beechworth diggings.

* Gold was discovered in the district in August 1853 when diggers were shown some 'pretty' stones by local Aborigines. The first camp grew up 1.5 km east of present-day Rushworth. It was named 'Nuggetty' because so many nuggets were found in the area. Overnight hundreds of tents and slab huts, stores, wine shanties, dams, puddling machines and crushing machines appeared in the area.

* Gold seemed to be everywhere. Alluvial gold was plentiful in the gullies and underground shafts were sunk to a depth of 270 metres. In some instances gold reefs were discovered that were 2.5 metres thick. At its peak Rushworth had 26 mines a population of 40 000.

* Poet Richard Horne was appointed as one of the two gold commissioners, along with a man named Willoughby, to oversee the rush. He named the town and successfully prevented a Eureka Stockade-type insurrection - known as the Rushworth riot and pre-dating the Eureka riot - over the miner's licence.

* The townsite was surveyed in 1854 and by 1858 there was a police camp, a wooden courthouse, five hotels, two breweries, a school, seven large stores, 20 tradesmen's shops and two banks; all concentrated at the southern end of High Street.

* The town's newspaper, the Waranga Echo, started in 1868

* By the 1870s the goldrush was over and people were leaving. It looked as though the town may die.

* In 1874 the first eucalyptus distillery in the district was established by William Begg.

* By the 1880s the district had moved from gold mining to timber. Between 1896-1900 an average of 50,000 railway sleepers was being harvested each year from forests around Rushworth. At one point there were seven sawmills operating in the district. The timber industry flourished until the 1940s

* The town declined during the Great Depression but survived as a result of increased demand for timber during World War II. Two local POW camps used the internees to cut and ship timber to Melbourne.

The Bakery in the Main Street is recognised as a superb cafe (good coffee) with a wide range of pastries and sandwiches.

There is a useful local website page on Facebook - https://www.facebook.com/Whats-On-In-Rushworth-642625462527329/ - for information about activities in the district. 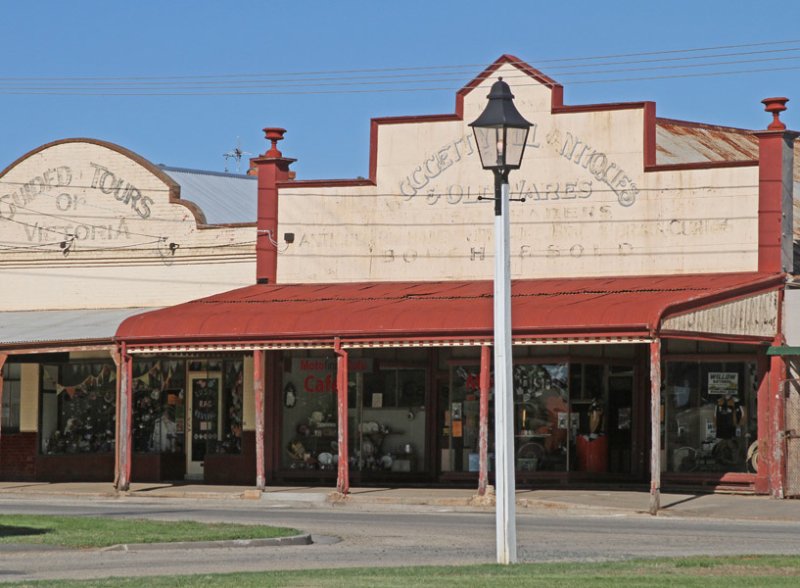 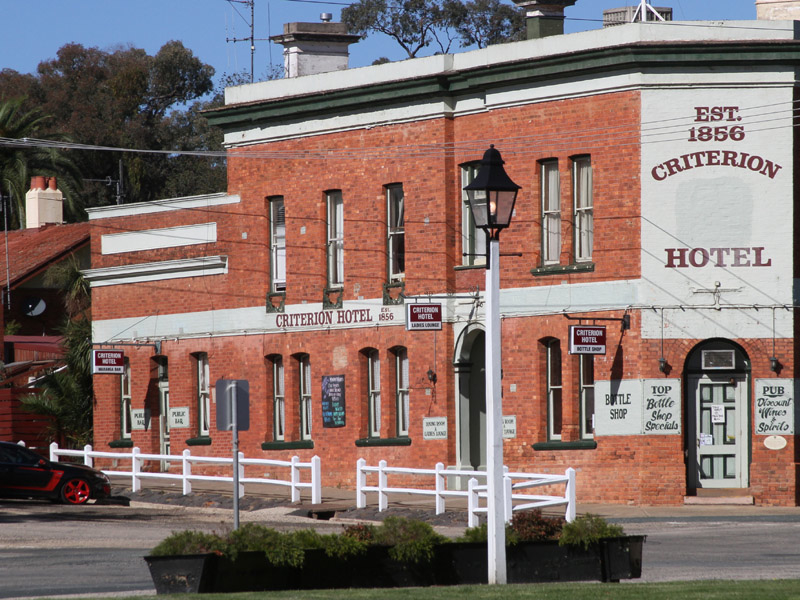 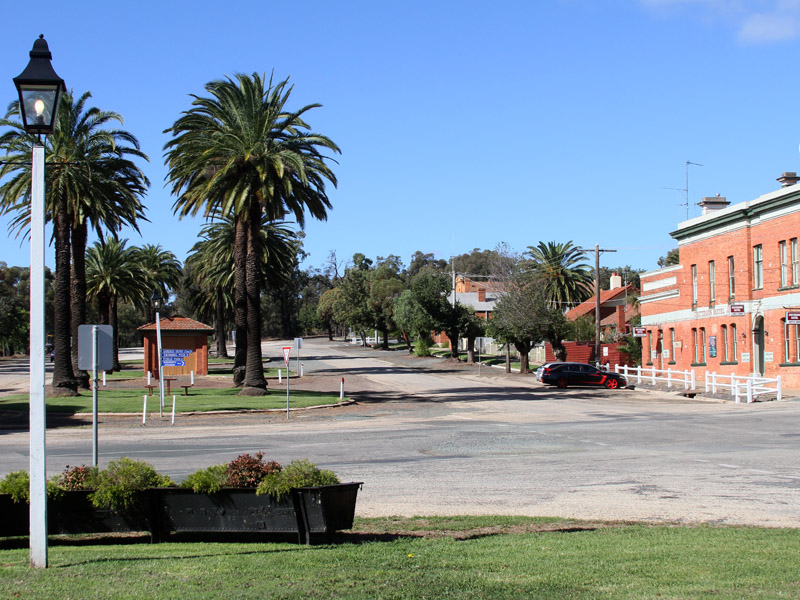 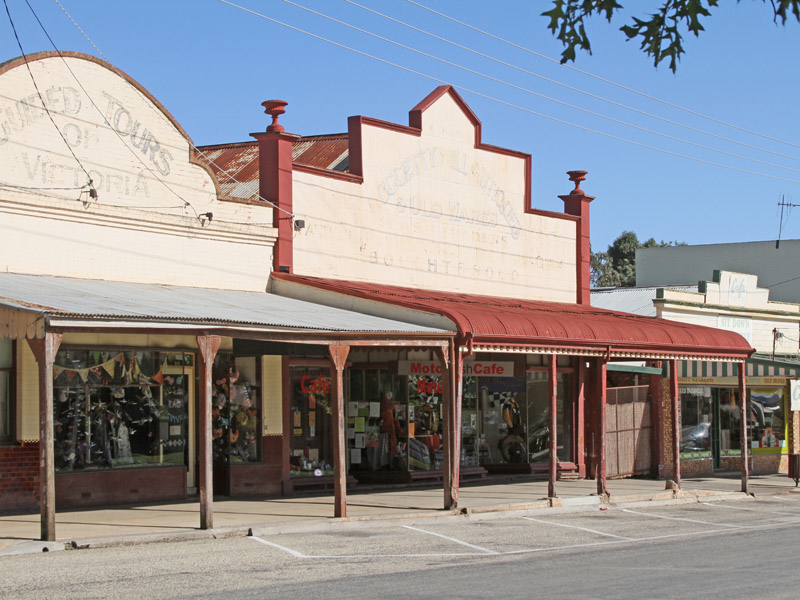