What was it like for the convicts? In 1870 the novelist Marcus Clarke, having visited Saltwater River, wrote: "Westward from Eaglehawk Neck and Woody Island lay the dreaded Coal Mines. Sixty of the 'marked men' were stationed here under a strong guard. At the Coal Mines was the northernmost of those ingenious series of semaphores which rendered escape almost impossible." Today the site, known as the Coal Mine Historic Site, is located 23 km from Port Arthur and, because it is rarely visited (both times I have explored the site there have been no other visitors) it has a sense of desolation and isolation which makes it a harsh reminder of the true nature of convict life.

Saltwater River is located 102 km south-east of Hobart via the A9 and 23 km from Port Arthur on the Tasman Peninsula.

Another example of the early settlers choosing an obvious name. Saltwater River was originally named Saltwater Creek presumably because it was a creek with saltwater. It was later changed to Saltwater River when it became part of the Port Arthur penal complex.

How to Get There
Saltwater River is not easily accessed. The following instructions should be helpful. From Hobart travel down the Arthur Highway to the Tasman Peninsula; turn right at Taranna onto the B37. At the Premaydena shop, turn right onto C341 for approximately 13 kilometres and turn right onto the sealed road to the Coal Mines Historic Site. It is all clearly signposted.

The Isolation Cells and Separate Apartments
Perhaps the most horrendous aspect of Saltwater River was the Isolation Cells. William Thompson described the experience as "When the outer passage door was closed there was total darkness. Solitary prisoners were allowed two hours exercise per day... The rations were one pound of bread per day, with an unlimited quantity of water." Above the cells were two levels of separate apartments which were specifically designed to try and curb homosexuality among the prisoners.

Spending Time Experiencing the Life of Convicts
The site is so isolated and few people visit. The Port Arthur Management Authority have used the stories of convicts like William Thompson and George Froggart to evoke the life led by the prisoners who ended up at Saltwater River. On a few logs there is a photo of George Froggart, described as "useless", and a description of his miserable life.

"Not much went well for George. Transported in 1840 for raping 19 year old Harriet Able, he'd briefly worked as a miner in the Yorkshire pits so they sent him to the Coal mines. His record shows convictions and punishments for idleness, disobedience of orders, making a disturbance and misconduct in 'cutting away the roof of the coal mine'. He would have known what it was like to work in chains and to spend days in the silent darkness of a solitary cell."

Coal Mine Walks
The Coal Mine Walks list a total of ten walks in the area - each has its own specific interests - and provides a detailed map of directions. The ten walks are:
1. Convict Precinct - a 30 minute return walk of 800 metres which covers the main buildings and ruins in the convict precinct.
2. Tramway and Beach Walk - a one kilometres, 40 minute walk to inspect the area where the tramway ran down to the beach and where the coal was loaded. The brochure notes: "Along the shore you can see small lumps of red and black material. The red material is coal slack, burnt by fires that smouldered for many years after the Mines were closed. The black material is coal that fell into the water during loading at the jetties. There were four main jetties. Two were near the Settlement, a third serviced the inclined plane, and the fourth serviced the Commissariat Store."
3. Plunkett Point - a 2 km return walk taking around one hour on a gravel road to Plunkett Point. The Commissariat Store was built here in 1842. It was two storeys high and could contain provisions for 2,000 men.
4. Inclined Plane - a 3 km return walk taking around 105 minutes and reaching the clifftops at Plunkett Point which lie to the north of the convict precinct. This took the coal from the shaft to the jetty. There is a contemporary description of the process: "a windlass arrangement for hoisting the coal, a full box going up and empty one going down. A platform was built to the mouth of the shaft, and the boxes of coal were landed and placed on a tram, which ran out to a screen above the rails of the inclined plane... The [screened coal then] went into wagons underneath [which] were run down the hill to the jetty." The system worked in such a way that the heavy coal-laden wagons rolling down the hill helped to pull the empty wagons up the hill. Not surprisingly it required "careful treatment to safely bring the wagon to the jetty. We used to stand on the brake behind, and guide the wagon to keep it on the road. The jetty was built so that [ships] could lie underneath; the wagons above, with flap arrangement below, could then quickly discharge their load into the hold of the boat."
5. Signal Station - a two hour, 3.5 km walk around past the Inclined Plane and the Shaft to the location of the old semaphore signal station. The signal station was part of a system designed by Captain Booth at Port Arthur which allowed communication to occur between Port Arthur and the outstations in fifteen minutes.
6. Military Precinct & Gardens - a 4 km return lasting 2 hours and 30 minutes to the Military Precinct which lay beyond the convict precinct
7. Military Precinct to Convict Settlement - which is a short 15 minute, 500 metre walk.
8. The Quarry - a 90 minute, 2.5 km return walk. The brochure provides a detailed contemporary account of this large shaft which was 92 metres deep. It was constantly flooding and William Thompson, one of the workers in the mine, has left us this description of the working "At the bottom of the shaft there were three roads. One was called the Double Road; it lay right in front of you and ran steeply down for about 40 or 50 yards... at the bottom there was a pump which was continually kept at work pumping the water up to the bottom of the big shaft. At the mouth of the pit was a pump to drain the water that collected at the bottom, and this was continuously operated by about eight men or more.
The coal was extracted by "sending the men down was for one man to sit across the short iron bar, holding onto the chain which was attached to its centre, and another man sat on the opposite side across the first man’s knee. They were then lowered by the windlass to the bottom. One miner got the coal from each face..."
9. A Heathland Wander - a pleasant  3 hour, 4.5 km return wander through the surrounding heathland from the Main Shaft to the Air Shaft.
10. The Air Shaft - a 5 km return, 3 hour 30 minutes walk through the heathland to the air shaft.

The Coal Mine
The sign near the old convict coal mine shaft, which is now nothing more than a deep hole surrounded by a large fence, explains: "This large excavation is all that remains of the main shaft of the coal mines of Plunkett Point. Mining was commenced in 1834 during the regime of Captain Charles O'Hara Booth. It was designed primarily to supply the convict and military departments. For a convict work in the coal mines was a form of punishment. The original works were near the main building on the foreshore. Following a survey of the area this shaft was sunk in 1842. At the peak of production some 500 tonnes of coal per year were sent to Hobart. It was of inferior quality and sold for 10 shillings per ton. A steam engine was located at the edge of the shaft and was used to haul coal and water from the mine. It was the first mechanical device used in coal mining in Australia. The stone blocks of the engine mountings can still be seen. The cost of operating the mine was considered excessive. Operations eventually discontinued in 1848. The mine was leased to a private company but by 1867 supply of coal was exhausted and the mine closed down. Subsequently in the interest of public safety the shaft was sealed." It is worth noting that "Only convicts who were skilled miners worked at the coal face. They dug an average of 3 tons per day; each miner had three convict labourers to take away the coal. Most convicts here, however, were employed in quarrying, lime or charcoal burning, building, gardening, splitting timber, or labouring above and below ground. Skilled convicts – carpenters, blacksmiths, shoemakers, tailors and tanners – worked at their trades." So, in part, the life of the convicts at Saltwater Creek - if they were not coal miners - could be bearable although William Thompson, a young shoemaker who was transported for life in 1841, spent twelve months underground taking away the coal and later described the experience as "I contemplated the naked figures, faintly perceptible in the gloom, with feelings of horror."

Background:
The UNESCO website on Australian Convict Sites (http://whc.unesco.org/en/list/1306) places the coal mines at Saltwater River in a larger context observing: "The most harsh stations, for those prisoners considered to be the most dangerous, included a prison, hard and often dangerous labour, corporal punishment, such as lashes or deprivation, and solitary confinement. Most sites had a prison and a solitary confinement area; but others were punishment stations, such as Norfolk Island, Port Arthur, and the Tasman Peninsula Coal Mines. These stations were renowned throughout the entire British Empire for their harshness, in order to maintain the fear of transportation among the population and so reduce crime in Great Britain and its colonies."

* The Port Arthur penal station was established as a small, timber station in 1830.

* Saltwater River was established as a convict outstation in 1833. There were two outstations: one was agricultural and supplied food to Port Arthur; the other was a coal mine which convicts described as "hell on earth".

* By the late 1830s Saltwater River was producing most of the coal being used in the whole of Van Diemen's Land.

* By 1843 there were 579 prisoners, 27 soldier guards, 35 civilian supervisors and administrators, 14 wives and 90 children living at Saltwater River.

* Convict mining at the site stopped in 1848 and the site was sold to private operators.

* In 1901 the outstation and mine were abandoned.

Saltwater River does not have its own visitor information but there is material and advice available at the Port Arthur Historic Sites Visitor Centre, Arthur Highway, Port Arthur, tel: (03) 6251 2310.

There is neither accommodation nor eating facilities at Saltwater River.

There is an excellent and comprehensive brochure which can be downloaded at http://www.portarthur.org.au/file.aspx?id=13169. It is produced by the Port Arthur Historic Site Management Authority. 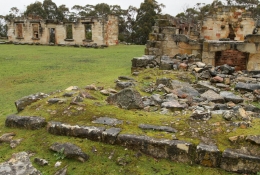 The remnants around The Square at the Historic Site. 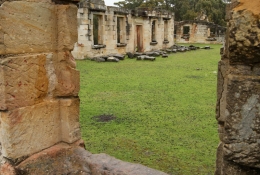 The walls around The Square were built to last for an eternity. 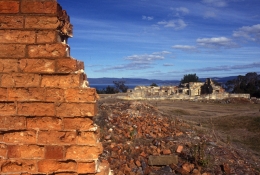 A weathered wall at the old convict ruins beyond Saltwater River ( photo taken 1990). Note how The Square has been grassed and improved. 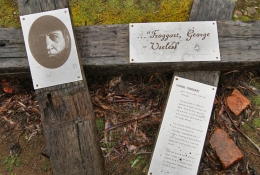 The sad history of George Froggart recorded for eternity of the remnants of timber at the Coal Mines site. 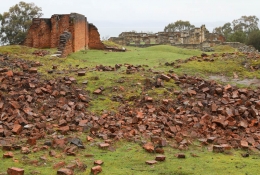 There has been a careful attempt to leave the ruins as they have been for over 120 years.