San Remo is a small fishing settlement surrounded by perpetually green coastal scenery. It is located at the western tip of the Anderson Peninsula and across "The Narrows" from Newhaven on Phillip Island. Historically it was a fishing village and in recent times it has been a fashionable holiday destination with the attractive quality, in the summer months, of being considerably cooler than suburban Melbourne.

San Remo is located 125 km south-east of Melbourne via the M1 and Koo Wee Rup.

The township was designed to attract tourists and, as such, in 1888 it was named San Remo after the famous resort town on the Italian Riviera.

Pelican Feeding and the Pelican Sculpture
Pelican feeding takes place on the San Remo foreshore, near the jetty, each day between 11.30 am and noon. It is part of the town's Fishing Co-operative's activities. Near the Co-op on the foreshore is a metal sculpture of a pelican with a simple, powerful message about marine debris: "Marine debris such as bottle tops are a threat to our marine wildlife. Sometimes animals mistake bottle tops as food or become entangled. You can help!
1. Collect bottle tops and you walk along the beach.
2. Place your bottle tops into the beak or neck of the pelican sculpture.
3. Place all other rubbish in the bins provided along the foreshore."
See https://www.sanremoforeshore.org.au for more information.

Fishing and Diving Charters
The waters around San Remo are very popular with anglers. It is possible to fish from the jetty or to hire a fishing charter and head out onto Western Port Bay where it is possible to catch flathead, snapper, channel whiting, King George whiting, Australian salmon, flounder, school and gummy shark, garfish, trevally and pike. There are a number of operators including Island Offshore Charters - check out https://www.visitphillipisland.com/listing/san-remo-off-shore-charters-fish-and-dive-charters.

George Bass Coastal Walk
This is a pleasant clifftop walk fromm Punchbowl Road at San Remo to Peppermint Road in Kilkunda. The total distance is 7 km with some short, steep sections. Expect to see remnants of native vegetation on the clifftops including coastal tea-tree, white correa, coast beard-heath, sea box and coast banksia. From the clifftops, Southern right whales can be seen near the shore between May and October. The local birdlife includes seagulls, pelicans, nankeen kestrels and black-shouldered kites.
The coastline east of San Remo appeals to surfers, anglers, snorklers, birdwatchers and beachcombers with long ocean beaches and rock platforms with cliffs towering above them. Check out https://www.basscoast.vic.gov.au/explore/leisure-and-recreation/george-bass-coastal-walk for more details. Parks Victoria have a downloadable sheet. Check out https://parkweb.vic.gov.au/__data/assets/pdf_file/0003/352803/Park-note-George-Bass-Coastal-Walk.pdf which notes of the walk: "Caution must be exercised when undertaking this walk. The track follows a narrow strip of public land along cliff tops, consisting of slashed track through grassland. The track surface can be slippery, so sturdy footwear should be worn. Beaches along the walks are unsuitable for swimming due to the presence of strong undertows, rips and steep sloping sandy bottoms. Fishing or walking near the waters edge can be extremely dangerous; swells and large waves can crash up against the rocky coastline."

Kilcunda
Located 11 km to the south of San Remo via the Bass Highway, Kilcunda is a village which is located on the Wonthaggi Railway Line, now the Bass Coast Rail Trail. After coal was discovered in the cliffs near the town, the Western Port Mining Company began excavations in 1871. Until the railway line was extended from Kilcunda to San Remo in 1883, the black coal was transported to San Remo by bullock teams. A charming trestle railway bridge, built in 1910, still stands 2 km south of Kilcunda and is now part of the Rail Trail.
Kilcunda Beach is a white sandy strand surrounded by rolling hills. There are a few remnants from a coal mine which operated here from the 1870s, including a coal waste dump near the Bass Highway to the west of the village, an old steam winch, two mining tunnels through the cliff face and the trestle railway bridge. Kilcunda Beach is suitable for anglers and surfers. There are suitable walking tracks around the cliffs on either side of the town.

Bass Coast Rail Trail
Described as a 16 km trail for walking, cycling and horse riding, the Bass Coast Rail Trail ends at Wonthaggi at the restored Railway Station in Murray Street having passed through open farmland and remnants of the town's coal mining history and offering a clear view of the Wonthaggi wind farm. The trail crosses two small timber bridges, crosses the Bourne Creek trestle bridge, passes along the shoreline at Kilcunda and the mouth of the Powlett River until it reaches Anderson where black coal was mined as early as 1852.

* The land around San Remo was occupied for thousands of years prior to European colonisation by the Bunurong Aborigines.

* In January, 1798 George Bass entered Western Port. He named it Western Port as it was, at the time, the most westerly known harbour on the coast.

* Bass returned in October, 1798 with Matthew Flinders. They anchored off what is now the settlement of Rhyll on the eastern side of Phillip Island. Bass thought that Cape Woolamai resembled the head of a snapper and so the island became known as Snapper Island.

* Lieutenant James Grant made the first known passage through Bass Strait from the west in 1800.

* Grant returned in 1801 at the instruction of Governor King. During that voyage he built a simple cottage on Churchill Island and planted corn and wheat with seeds supplied by his friend John Churchill, after whom he named the island. This was the first European settlement in what is now Victoria.

* William Hovell explored this coast on foot in 1826.

* Between 1802 and the 1840s, because of the colonies of seals which inhabited the coastline, sealers made regular stopovers on the island. Their settlements were short-lived and designed only to process their catch.

* The Anderson Peninsula was named after Scotsman, Samuel Anderson, who took up a grazing lease in the area in 1841.

* The European setlement of the local area was related to the establishment, around 1840, of a deepwater port at Griffiths Point, for the exportation of wattle bark, cattle and farm produce and, from the 1870s, coal.

* In 1850 a township was surveyed. It was known at the time as Griffiths Point.

* In 1875 a stockyard was built to hold stock from Phillip Island which swum across the Narrows.

* In 1876 the Phillip Island and Woolamai Shire Council first met.

* Commercial fishing commenced in the early 1900s. The King George whiting were sent to the Melbourne fish markets.

* In 1906 both the Anglican and Catholic churches were built.

* A ferry relayed tourists to Phillip Island until a suspension bridge was built in 1940.

* In 2006 the Nereus tidal turbines have generated power for the national grid.

* In 2012 a 125 million year old fossil from a ceratosaur was found in the district.

* In 2014 the Fishing Co-operative opened a restaurant overlooking the pier.

There is a brief official overview at https://www.visitmelbourne.com/Regions/Phillip-Island/Destinations/San-Remo. 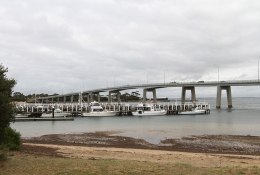 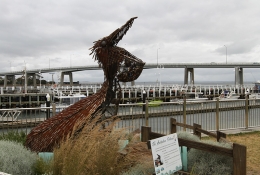 The pelican sculpture on the foreshore 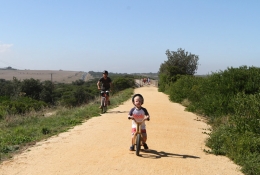 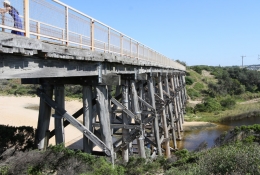 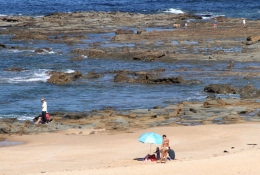 The beach and rock platform near Kilcunda