Located at the southern end of the Gaagal Wanggaan National Park, Scotts Head is a product of the twenty-first century. Once a sleepy holiday destination, in recent times it has seen the arrival of very cashed-up city dwellers seeking a "sea change" and consequently what was once a quiet secret for surfers has become a chic destination five hours drive north of Sydney. Today it is a popular holiday destination for both families and for surfers.

Scotts Head is located 482 km north of Sydney between Port Macquarie and Coffs Harbour. It is located 10 km off the Pacific Highway and 15 minutes south of Macksville.

The town was named after the first European settler in the area, William Scott.

Surfing - Scotts Head and Grassy Head
The excellent website Surf the Coast (http://www.surfthecoast.com.au/ScottsHead) explains: "The only true point-break in the Nambucca region, Scotts Head is traditionally more for intermediate and advanced board-riders than beginners. The break itself is a long right-hander and, particularly when sanded up, is regarded as one of the premier waves along this bit of coastline. “The Point” is best in south-east to south-west winds on an east or south-east swell, while out front of town are a few handy beach breaks which are ideal for holiday fun and frolics." It goes on to point that Grassy Head "can best be described as neighbouring Scotts Head, with its own right-hand point break and handful of beach breaks, backed by Grassy Head Caravan Park. This is a great beach for learn-to-surfers".

Forster Beach and its Mosaics
The main beach in the town is Forster Beach. It is home to the Scotts Head SLSC and to a truly remarkable collection of mosaics including the most beautiful public picnic table in the country and the most impressive toilet block. It looks more like an art gallery than a toilet block. There are a series of impressive mosaics on the walls. They were created by an artist named Guy Crosley in 2001 and they were paid for by the Australia Council, the NSW Ministry for the Arts, Arts Mid North Coast and the Scott’s Head Reserve Trust. They are the best toilets ... aesthetically speaking ... anywhere in the country.
Mind you ... Guy Crosley can’t spell and his grammar is a bit shoddy. The plaque explaining the mosaics has a comma in the wrong place, an unnecessary apostrophe and he can’t spell “installed” – which is funny because it is what he does. And nearby, just below the path leading up to the Whale Watching site, is another of Crosley's works - an extraordinarily beautiful picnic table. Eat on it if you dare. It is a work of art.

Whale Watching
There are two good locations in Scotts Head - the Surf Club Headland and Elephant Head - where, in season, migrating humpback whales can be seen as they make their way up and down the coast. The Surf Club Headland is accessible by walking past the SLSC and then making your way up the headland to the viewing platform.

Gaagal Wanggaan National Park
One of the newest national parks in New South Wales (it was created on 23 April, 2010) Gaagal Wanggaan (which means South Beach) has a number of cultural sites relating to the local Gumbaynggir Aboriginal people. The excellent website (see http://www.environment.nsw.gov.au/jointmanagement/GaagalWanggaan.htm) adds that "The National Park also protects undisturbed coastal dune systems, patches of rainforests, palm forests, coastal shrubland, and heath, and the estuarine communities of mangroves, salt marsh and seagrass beds along Warrell Creek." It is, quite intentionally, a National Park where the emphasis is on birdwatching, canoeing and bushwalking. The alert visitor will see white-faced herons and egrets foraging in the mangroves along Warrell Creek. Sea eagles will often fly overhead. There are a number of access points to Warrell Creek which is good for fishing and ideal for a quiet picnic. Check out http://www.nationalparks.nsw.gov.au/things-to-do/canoeing-paddling-experiences/Warrell-Creek for more details.

Mount Yarrahapinni Lookout
The gravel road to the summit of Mt Yarrahapinni offers the visitor a superb 360-degree view across to Scotts Head and around to the mountains that rise behind Macksville. The rainforests with marked walking trails, pebbled creeks, clear waterholes and picnic facilities are notable for the beautiful eucalypts, ferns, palms, wildflowers and wildlife.

* Prior to the arrival of Europeans the area was occupied by the Gumbaynggir Aboriginal people.

* The first European to sight the coast was Captain James Cook who sailed past Scotts Head in 1770.

* The first Europeans to pass Scotts Head and reach the Nambucca River were probably a party who, in 1818, set off from Sydney in search of convicts who had stolen a boat from Sydney Harbour.

* The explorer John Oxley surveyed the Nambucca River estuary in 1820.

* By the 1840s cedar cutters were in the area although the dangerous sand bar at the mouth of Nambucca River prevented them from reliably sending timber to Sydney.

* In 1886 Baillier's Gazette described the Nambucca River as "a fine mountain stream flowing through low swampy country, well timbered with cedar and other valuable woods. It falls into the ocean by a narrow rocky channel about fourteen miles north of Trial Bay and is navigable for small vessels that trade there for cedar, the only export".

* Local government was established at Nambucca Heads in 1915.

* With the clearing of the land, dairying emerged, although it was not until paspalum grass was introduced in the 1890s that it started to be profitable.

* Tomato, banana and carrot-growing developed in the Nambucca Valley during the 1920s

* The arrival, in 1923, of the railway saw the area develop as a holiday destination.

* Furnished cottages were let to holiday-makers by the 1930s.

* The first bowls green in Scotts Head was opened in 1959.

* In 1967 the Scotts Head SLSC could boast that it had the first ever all Aboriginal Bronze Squad in lifesaving history.

* In 1999 a boat carrying 60 asylum seekers from South China ran onto the beach at Scotts Head.

The Nambucca Heads website has a page dedicated to Scotts Head. Check out http://www.nambuccatourism.com.au/nambucca-valley-region/nambucca-valley/scotts-head. 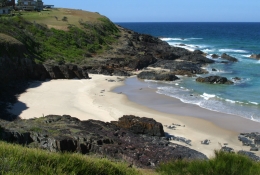 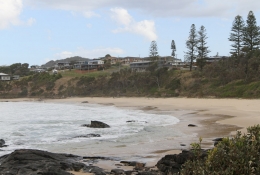 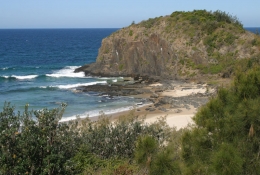 Elephant Head lies to the south of Scotts Head 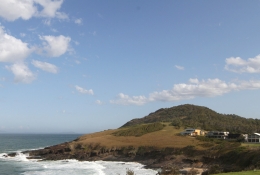 Houses at the southern edge of Scotts Head above the Crown Reserve. 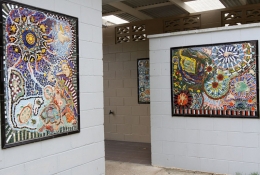 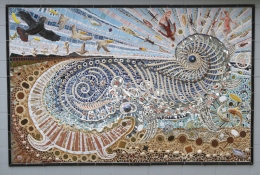 The mosaic on the outside wall of the toilet block at Forsters Beach. 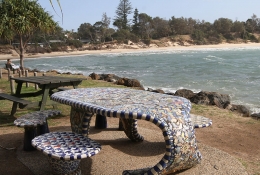 The extraordinary picnic table at the east end of Forster Beach at Scotts Head.