Small wheatbelt town in the Victorian Mallee on the shore of Lake Tyrrell.

Sea Lake is a wheat-belt town which is located south of the shores of Lake Tyrrell (the largest lake in Victoria). It is defined by the large grain silos on Railway Avenue and the railway line that transports the wheat which surrounds the settlement.

Sea Lake is located on the Calder Highway 353 km north-west of Melbourne.

The name of the town is self-evident. Some sources claim that the explorer Edward John Eyre gave Lake Tyrrell the name "Sea Lake" because it looked more like the sea than a lake. There is another explanation which argues that a surveyor saw the words "see lake" on a map and mistook them for "sea lake".

Murals
There are a number of murals around the town depicting local flora (at the Recreation Reserve) and scenes of Mallee life on the wall of the shop two shops up from the Sea Lake Pharmacy (in the main street).

The Local Rooster
Of all the eccentric things in small country towns the chicken that likes to cross the road (no jokes please!) from the Recreation Reserve has become something of a tourist attraction. Someone has put up a sign indicating "Chook Crossing" although it doesn't spend a lot of time crossing the road.

Lake Tyrrell Wildlife Reserve
Located 6 km north of Sea Lake on the Calder Highway is a gravel access road to Lake Tyrrell, Victoria's largest salt lake. It covers 20,860 ha. There is a viewing platform and information bay. The lake was probably formed by drifting sand blocking the passage of Tyrrell Creek. Over time it became a giant salt basin due to the flow of subterranean saline water and the run-off from the lake. It is dry most of the year, though, at times, it may be covered in shallow water. The evaporation leaves a salt crust. There are small islands in the lake which seagulls use as a breeding ground. The saltbush and samphire around the lagoon support a range of wildlife while the lunette to the east contains important Aboriginal relics.

Green Lake Regional Park
Green Lake is located 10 km south of Sea Lake on the road to Birchip . It is a small lake with sandy beaches, powered camping sites, showers, picnic-barbecue areas, gum trees and shade. The lake is suitable for swimming, fishing, yabbying, windsurfing and boating. Bushwalking is possible in the countryside around the lake which has stands of mallee and pine-buloke woodland. In 2016 it did not have a drop of water. It has not been filled since 2000. There were still camping facilities around the edges (even a concrete boat ramp) but there just was no lake.

* Prior to the arrival of Europeans the area was sparsely inhabited by the Wergaia Aboriginal people.

* In 1847, having travelled up the Tyrrell Creek to Lake Tyrrell, W.E. Stanbridge established the Tyrrell Downs run.

* Tyrrell Downs was bought by E.H. Lascelles in 1884, as part of his plan to turn the Mallee into fertile land. He hired 100 men to clear the land then floated a public company to raise capital. The result was a 20,000 ha wheat farm - one of the largest in the world.

* The Sea Lake Post Office was officially opened in 1895.

* By 1900 Lascelles company was turning a profit but this was destroyed by droughts and pests.

* Today over 100,000 tonnes of salt are extracted from Lake Tyrrell each year by the Cheetham Salt Works.

There is no Visitor Information Centre.

There is a community website. Check out http://www.sealake.vic.au for accommodation and events in the town. 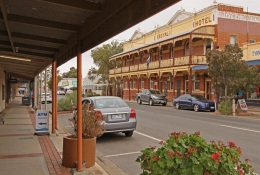 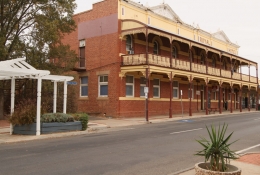 The Sea Lake Recreation Reserve is a tiny plot beside the Royal Hotel. 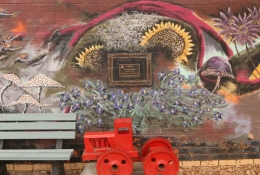 One of a number of floral murals in the town. 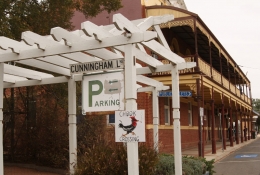 Only in Australia - a sign warning that a chicken crosses at this point and that traffic should behave accordingly. 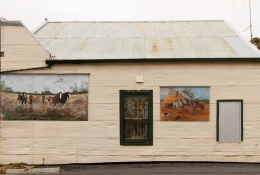 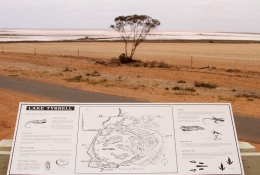 The view from the viewing platform at Lake Tyrrell. 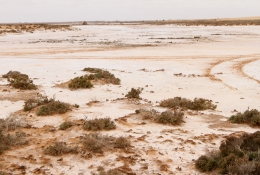 During periods of drought Sea Lake is nothing more than a vast salt pan stretching to the horizon. 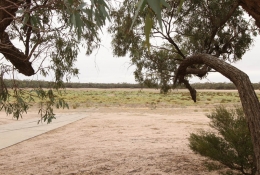 Green Lake Regional Park with no water but still a place to launch your boat.