Seaspray is a small, peaceful coastal resort where holidaymakers go to fish, boat, surf, swim and bushwalk. It is the perfect destination for those wanting to experience the grandeur of Ninety Mile Beach (reputedly the longest beach in the world) which stretches south from Lakes Entrance in a glorious narrow ribbon of firm, golden sand. There is easy access from Sale and a sealed road runs 28 km north along the coast to Golden Beach. There are numerous access points to the beach. There is an active surf club which means the beach is patrolled in summer (November through to the Easter Holidays) and Merrimans Creek offers a safe swimming alternative.
Seaspray's shopping comprises a general store, at the junction of Foreshore Road and Lyons Street, which has general supplies as well as a postal service, takeaway food and fishing gear. A large park stretches along the entire length of Foreshore Road.

Seaspray is located 241 km south east of Melbourne via the Princes Highway. It is 44 km south of Sale.

No one is sure who was responsible for naming the town but it is obvious it was named simply as a description of what blows off the Tasman Sea when the winds are onshore. It was originally known as Prospect after the Prospect Run which covered most of the land in the area. By 1916 it was known as Seaspray.

Ninety Mile Beach
Seaspray is located on Ninety Mile Beach and, not surprisingly, this beautiful and seemingly endless stretch of hard sand is the town's main attraction. There are lots of access points (up and over the dunes) along Foreshore Road but the most popular is the Seaspray Surf Life Saving Club which has a large viewing deck and ramps leading down to the beach. The beach is used for swimming, surfing, just walking along the sand, beachcombing and, of course, surf fishing. Successful anglers will find they can catch salmon, snapper, flathead, bream, whiting and shark. For information about surfing and weather conditions check out https://beachsafe.org.au/beach/vic/wellington/seaspray/seaspray.

Seaspray Dolphins
Located near the Seaspray Caravan Park, the Seaspray Dolphins were carved out of a 70 year old cypress pine by John Brady. The design is by Seaspray local, Susan Cox. The sculpture is at least six and a half metres high and the design was chosen because Susan, who had lived in the town for 14 years when the sculpture was constructed in 2013, explained that dolphins are often spotted off the coast of Ninety Mile Beach.

Shoreline Drive and Golden Beach
Although it passes on the inland side of the dunes along Ninety Mile Beach, Shoreline Drive offers plenty of opportunities to climb over the dunes and admire the beach. It is 27 km north-east to the beachfront town of Golden Beach. Shoreline Drive passes the small holiday village of The Honeysuckles and passes close to the shoreline of the Lake Reeve which, most commonly, is dry.

The Wreck of the Trinculo
Located 6.4 km south of the roundabout at Golden Beach is the wreck of the Trinculo, a 318-ton iron barque, built in 1858, measured 42 metres in length with a beam of 7.2 metres. In May, 1879 it struck a sandbar 30 metres offshore. All of the crew, including the captain's wife and sixteen-month old baby, reached the shore and one crew-member, a Mr Lefevre, was awarded a silver medal by the Royal Humane Society. A monument at Golden Beach was built from a water tank salvaged from the wreck by a local.

Ninety Mile Beach Marine National Park
The Ninety Mile Beach Marine National Park covers 2,750 hectares and five kilometres of coastline. It offers excellent surf fishing opportunities as the entire area is rich in bream, salmon, whiting, garfish, flathead, snapper and mullet. Ninety Mile Beach is also a fine spot for a long walk although it is characterised by strong rips, sharks and rough waters. Whales and dolphins can also be seen close to the shore.
Birdlife is prolific all along the coast. Species include crimson and eastern rosellas, yellow-tailed black cockatoos, swamp harriers, hawks, blue wrens, silver eyes, red-browed finches, eastern spine bills and many other honeyeaters. The usually migratory rainbow lorikeet remains along the beach's coastal parks all year owing to the temperate climate and the dietary attraction of coastal banksia. The beach is dominated by invertebrates including sponges, ascidians, bryozoans, hydroids and soft coral. The Ninety Mile Beach area has the highest species diversity anywhere on the planet. In ten square metres 803 species were discovered living in the sand and in one square metre a staggering 187 species. There is a useful Park Note which can be downloaded by accessing http://parkweb.vic.gov.au/explore/parks/ninety-mile-beach-marine-national-park. It is marked simply as "Ninety Mile Bech Marine National Park - Park note."

Merriman Creek
One of the few creeks in the area, Merriman Creek, edges the south-western section of Seaspray and opens up to a wide waterway as it meets the Ninety Mile Beach. There is a fishing platform and shelter near the mouth. There is an island further upstream which can be reached via a walking track which comes off Buckley Street. The island is an ideal spot for both fishing and walking.

* Prior to the arrival of Europeans the area around Seaspray was home to the GurnaiKurnai Aboriginal people.

* By 1871 local pastoralists - notably William Pearson of Kilmany and Lemuel Bolden onf Strathsfieldsaye would take their wives, children and staff and camp on the beach at Prospect which later became known as Seaspray.

* Some time later James McLachlan worked tirelessly to build a decent road from Sale to Seaspray.

* By 1878 there was a prospectus for a Public Recreation Reserve at Prospect Sea Beach. It covered 255 acres.

* By 1909 commercial horse and buggy services were operating from Sale to Seaspray. A buggy and pair with a driver cost £1.

* By 1911 the settlement had its own cricket team.

* By 1914 there were shops, often operating from houses, offering meals, accommodation and supplies.

* After World War I the area was opened up to soldier settlers.

* In 1921 the Earl and Countess of Stradbroke, the Governor of Victoria, visited both Prospect and Seaspray.

* In 1937 the Anglican Church of the Epiphany was consecrated.

* In 1955 the Seaspray Surf Lifesaving Club was formed.

* The Anglican Church was deconsecrated and put up for sale in 2014.

* A new Surf Lifesaving Clubhouse was opened in 2015. It was a $2.6 million rebuild after a 2007 storm had seriously damaged the previous building.

* In 2016 the town celebrated its centenary.

There's a good overview of the town at http://www.travelvictoria.com.au/seaspray. 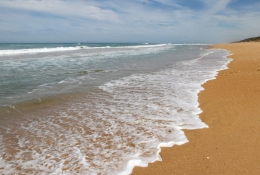 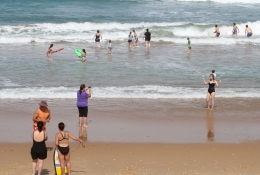 The beach in front of Seaspray Surf Lifesaving Club. 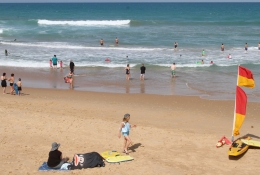 The beach at Seaspray. 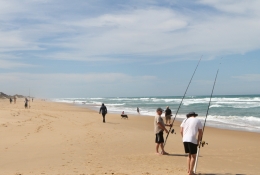 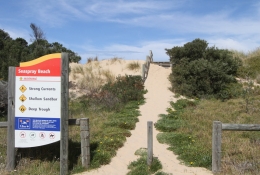 Access to the beach is over constantly changing sand dunes. 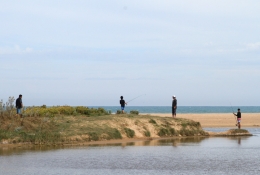 Fishing at the mouth of the Merriman Creek on Ninety Mile Beach. 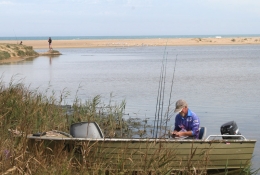 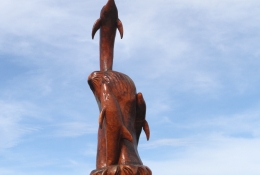 The dolphin sculpture at Seaspray carved out of Cypress pine by John Brady.