Seppeltsfield is a settlement which has evolved into a comprehensive Barossa Valley wine experience with visitors invited to inspect the cellar where 100-year-old wine is stored, encouraged to take a tour of the vineyard and the cellars, and offered opportunities to taste and buy the products of the district.

Seppeltsfield is located 76 km north-east of Adelaide via Gawler.

Joseph Seppelt arrived in South Australia in 1849, was naturalised in 1851 and in 1852 bought a property in the Barossa Valley which he named Seppeltsfield.

Seppeltsfield Winery
Seppeltsfield Winery is located at 730 Seppeltsfield Road. It is unique and distinctive being characterised by long rows of palm trees and handsome bluestone buildings. By the 1890s the winery was recognised as the most modern in the world. Today it is a total winery experience with cellar door sales, wine tasting, picnic facilities and tours of the winery. The Seppeltsfield website notes: "Seppeltsfield is most famed for the Centennial Collection - an irreplaceable and unbroken lineage of Tawny, every vintage from 1878 to current year. The estate remains the only winery in the world to release a 100 year old, single vintage wine each year. The estate also boasts a remarkable collection of Apera (Australian Sherry), crossing Fino to Oloroso styles, Tokay and Muscat, all held in vast Solero nursery cellars. More recently, the recommissioning of the 1888 Gravity Cellar has revitalised the estate’s prowess with still wines. Super premium Barossa red varietals are once again passed through the Gravity Cellar, which enables gentle colour and tannin extraction - now a coveted modern day winemaking practice." For details tel: (08) 8568 6200 or check https://www.seppeltsfield.com.au.
It is possible to tour the special areas of the winery including:
* 1878 Centennial Cellar - an historic bluestone cellar where barrels of vintage tawny are kept for 100 years. It now has every vintage from 1878 to the present day - a museum of wine produced by Seppelts.
* 1888 Gravity Cellar - constructed by Oscar Benno Seppelt in 1888 this was a major innovation in wine production. The website explains: "Built into the hillside on a series of terraces, Benno’s design of the cellar was centred on allowing the natural course of gravity to assist the flow of fruit down through the winery. Whilst originally borne from engineering logic, the gravity-fed minimal handling approach is now a coveted modern-day winemaking principle. In complement to open fermentation, the resultant wines show heightened aromatics and purity of fruit, aided by the gentle extraction of colour, flavour and tannin." It was closed in the 1980s but reopened in 2010. Check https://www.seppeltsfield.com.au/index.php/experience/the-estate/vineyards-cellars for more information.
* Great Terraced Vineyard - is a 60-80 year old planting on a hillside comprising ironstone, quartz and slate soil. It is used predominantly for fortified wines and the vines have been carefully planted along the contours.
* The Gardens - the gardens are one of the wonders of Seppeltsfied with botanic species and, most famously, the 5 km trail of over 2000 Canary Island Date Palms planted during the Great Depression. There are also water features, a citrus-lined courtyard and an Elm Walk. Check https://www.seppeltsfield.com.au/index.php/experience/the-estate/gardens-architecture for details.
* Seppelt Mausoleum - The Seppelt Mausoleum is an ornate Greco-Roman building with Doric columns which stands on the top of the hill. It was completed in 1927 and positioned so it provides views over the surrounding area.
* State Heritage Listed Buildings - There are twelve South Australian State Heritage listed buildings in the complex including the Seppelt Family Homestead (1851), Blending Cellars (1867-1878), the Dining Hall (1870-1890), Winemakers Terrace & Chimney (1877) and Laboratory (1945). They were made from local slate, bluestone and ironstone and are impressive monuments to the foresight of the Seppelts.

Tours of Seppeltfield
Check out https://www.seppeltsfield.com.au/index.php/experience/tour-discover/daily-tours-tastings for the wide range of activities available at Seppeltsfield including a Segway Tour of the vineyard, a daily heritage tour, a village discovery tour, the opportunity to hire bicycles, and a tour of the Centennial Cellar.

The story of Joseph Seppelt
Joseph Seppelt, who came from Silesia, was not in the first wave of German-Prussian emigrants. He didn't arrive in South Australia until 1849 and by 1850 he had purchased 158 acres (at the huge price of £1 an acre) which he named Seppeltsfield. He started growing tobacco but when the crop failed he turned to grapes. It was a lucky accident as the vast Seppelts vineyard and wine producing business is based on that change.
The Australian Dictionary of Biography records that Seppelt, as is entirely appropriate for a wine maker, died probably from an excess of his own product. It records: "Naturalised in 1851, next year he bought property in the Barossa district and named it Seppeltsfield. After another attempt to grow tobacco he planted corn, wheat and a small vineyard. He made his first wine in his wife's small dairy and in 1867 built the first part of the stone winery. The business expanded rapidly as he concentrated on the production of wine, much of which he sold along the Murray where it was transported by paddle-steamer. Survived by his wife, a daughter and three sons, he died suddenly of delirium tremens on 29 January 1868 and was buried at Greenoch."
His son, Oscar Benno Pedro Seppelt, expanded the business so that it included spirits such as brandy, gin and vermouth, as well as cordials, vinegars and essences. Today Seppeltsfield is like no other winery. The rows of date palms (planted in the 1930s), the turrets and the hugeness of the site make it a very special winery experience. Check out https://www.seppeltsfield.com.au for more details.

Marananga
Located 5 km from Seppeltsfield, Marananga was known as Gnadenfrei (a German word meaning 'freed by the grace of God') until 1918 when, due to anti-German sentiment during World War I,  it was changed to Marananga, a word reputed to mean 'my hands' in the Kaurna Aboriginal language.
The village has a small number of historic buildings including the old School house (1879) and the beautiful St Michael's Lutheran Church which was begun in 1857 and extended in both 1873 and 1913. The bell, which stands out the front, was presented to the church by Leopold Schmidt in 1874 and hung originally in a wooden belfry at the side of the church. It was relocated to the local school in 1913 but when the school closed in 1994 it was returned to the church.

* In 1849 Joseph Seppelt arrived in South Australia from Silesia.

* Seppelt died suddenly of delirium tremens on 29 January 1868 and was buried at Greenoch.

* In 1878 the famous Centennial cellar was completed. The wine matured for 100 years.

* In the 1930s rows of date palms were planted beside the Seppelt winery.

There is a dedicated website for the vineyard. Check out https://www.seppeltsfield.com.au. 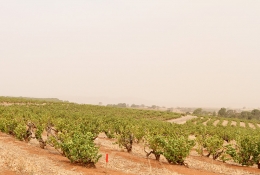 Rows of vines stretch to the horizon at Seppeltsfield 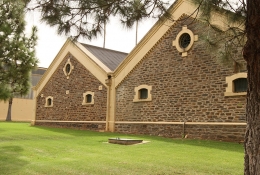 The state listed bluestone building characterise the charm of Seppeltsfield 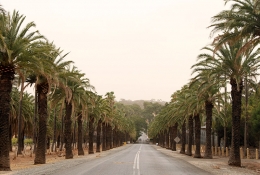 The famous rows of palm trees at Seppeltsfield 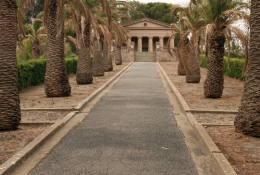 The path up to the Graeco-Roman Seppelt Mausoleum (1927) 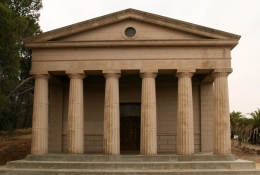 The Seppelt family mausoleum at Seppeltsfield 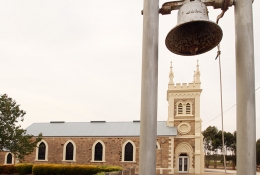 The Marananga, known as Gnadenfrei (a German word meaning 'freed by the grace of God') Lutheran Church and bell