Village and vineyard created by the Jesuits in the 1851

Sevenhill is a tiny village surrounded by vineyards and wineries. Located on the Main North Road it is famous because, in the early 1850s, Jesuits moved into the area, set up a vineyard to make sacramental wine, and over the past 160 years have developed an excellent and wide ranging vineyard and an impressive church and religious centre.

Sevenhill is located 128 km north of Adelaide in the heart of the Clare Valley.

When the Austrian Jesuits led by Father Aloysius Kranewitter arrived in the area in 1848 they decided to name the location 'Sevenhill' after the famous seven hills of Rome, the holy city.

Sevenhill Hotel
This historic hotel was built in 1863 by Father Kranewitter's brother. It was originally known as the Black Eagle Hotel. It changed its name in 1918. At one time it was famous for the large scene painted on the dining room wall, a collection of grotesque images. It had been painted by a Bavarian artist who specialised in religious works and had been employed to paint a mural in St Aloysius Church. He worked on the pub's wall when he was drunk. It is said that the mail coach often stopped so the passengers could gaze up on the hideous scene. A later landlord painted over it with whitewash. He believed that some of the female figures had too few clothes on. There is a downloadable history of the pub which can be accessed at https://www.sevenhillhotel.com.au/wp-content/uploads/2018/10/151-yrs-Sevenhill.pdf.

Wineries in the Area
In areas like the Clare Valley, where there are 35 cellar doors, it is best to refer to the specific knowledge provided by the local tourist information sites. The Clare Valley Cellar Door site (https://www.clarevalley.com.au/wine/cellar-doors) provides a map and all the details of opening hours, phone numbers and contact points.
The most famous winery in the area is:

Sevenhill Cellars
Located to the east of Sevenhill at 111C College Road, Sevenhill is a religious complex (it comprises St Aloysius Church, the college and extensive gardens) which is also probably the most famous vineyard in the Clare Valley. It was established in 1851 by the Jesuits and is still run by the Jesuits. The original intention was to produce sacramental wine. Today it  specialises in red and white table wines and also produces and exports sweet white, sweet red and dry white altar wines. Its wines are derived from cabernet sauvignon, shiraz, Merlot, Malbec, pinot gris, riesling, semillon, tokay, Verdelho, traminer, Grenache, Touriga, frontignac, cabernet franc, ruby cabernet and Pedro grapes. It is open daily from 10.00 am - 5.00 pm. Tours are by appointment. For more details contact (08) 8843 4222 or check out https://www.sevenhill.com.au.

Madonna of the Vines
In the grounds is an unusual sculpture. It is titled 'Madonna of the Vines' and a plaque explains that it was "Commissioned by Desmond and Mary Kennedy and Family for Brother John May SJ to celebrate a special birthday and 22 vintages as winemaker at Sevenhill Cellars, inspired by 'Our Lady of the Lakes' in South America, the madonna is 231 cm high, weighs 100 kg and each bronze leaf weighs 2 kg. This work was sculpted by Andrew Parish of Woodville, South Australia, who envisaged "The Madonna walking through the vines and blessing them to ensure good wines to follow"." August, 1994.

Tours of Sevenhill
A tour of the winery and buildings is available and follows a walking trail that includes the Underground Cellar, old-vine vineyards, St Ignatius of Loyola Shrine and St Aloysius’ Church with its crypt. It can be guided or self-guided. The guided tours occur Monday-Friday at 11.00 am and at weekends by appointment. Contact Cellar Door, tel: (08) 8843 5900 for guided tours or ask the Cellar Door staff for a walking tour map and information.

Riesling Trail
If you believe that no one should drink and drive, then drinking and cycling is a wonderful and much safer alternative. The historic railway line between Auburn and Clare (it was built in 1860) has been covered with easy-to-walk-on gravel and opened up as the Riesling Trail. The Riesling Trail allows wine enthusiasts the opportunity to walk or cycle up the Clare Valley removed from the dangers of the main road. They can experience the quiet beauty of the area and there are numerous sideways off the main Trail which will encourage visitors to divert to 35 wineries and craft shops. It is just a very charming and pleasant walkway/cycleway which passes such famous wineries as Sevenhill, Grosset, Knappstein and Mt Horrocks. Bicycles can be hired in Clare and at Cogwebs Hub Cafe in Auburn. Check out https://www.facebook.com/CogwebsBicycleHireandHubCafe for details. There is an excellent, downloadable map of the entire route. Check out https://www.clarevalley.com.au/assets/maps/Riesling-Trail-Map.pdf.

Neagles Rock Lookout
Located 5 km north of Sevenhill off Neagles Rock Road, this lookout offers panoramic views across the Clare Valley and puts the richness of the wine and vineyard culture into impressive perspective. It is a steep, 300 metre walk to the top. There is a sign titled "Picnic at Neagle's Rock" which explains that the rock is 455 metres above sea level and that it was once known as "Lover's Retreat". The area around the rock contains many endangered and rare native plants.

The Jesuits in Sevenhill
A wealthy German landholder, a Roman Catholic who came from Silesia named Frank Weikert, decided to bring a group of 130 Catholics to South Australia because he felt they were being persecuted in their homeland.
When he left Silesia he gave all his servants the opportunity to join him and provided their fares, and allowed them to repay him when they could afford it.
He chartered a vessel, solely for his party, and asked the Archbishop of Munich to send a priest as chaplain.
The Archbishop consulted with the General of the Jesuits, with the result that two Jesuit fathers, the first who came to Australia, were sent.
One of them, Father Maximillian Klinkowstrom, returned shortly afterwards; the Rev. Aloysius Kranewitter, remained and purchased 100 acres where the cellar and church now stand.
Kranewitter was impressed with the richness of the soil and he saw the potential to produce sacramental wine. He named the land Sevenhill, after the seven hills of Rome, and he planted vines hoping to capitalise on an increasing Catholic presence in Australia.
Kranewitter was central to the development of Sevenhill. In the early days, before the vineyards were in full production, the Jesuits and their workers sold butter to the miners in the Burra district.
Kranewitter travelled to the Victorian goldfields where his good works were recognised by gifts of gold from the miners. It was with this gold that he established the Sevenhill complex.
Realising the potential of the area, and recognising the need for good quality altar wine in both the colony and overseas, the Jesuits planted their grapes and started to produce wine. The underground cellar at the vineyard was excavated by hand and the winery building was constructed from stone quarried on the property.
Construction of St Aloysius’ Church started in 1864 and, after several delays because of a shortage of money, it was finally completed in 1875. It was built from local stone. The church has a crypt which is the final resting place for over 40 Jesuit who lived and died at Sevenhills.
St Aloysius College which was built to cater for the sons of colonial Catholics was South Australia’s first Catholic secondary school from 1856-1886. It was built in 1854 and now houses the Jesuit community and trainees. The vineyards have expanded so that now they produce high quality table wines which are sold to the general public - sparkling riesling, rose, pinot gris, shiraz, merlot and cabernet sauvignon - as well as sacramental wines.

* In 1848 a group of Austrian Jesuits led by Father Aloysius Kranewitter left Vienna and travelled to South Australia.

* The Jesuits settled in Sevenhill in 1851 after Father Kranewitter purchased 100 acres of land.

* St Aloysius Church was not completed until 1875.

The cellar door has useful information about the vineyard, the buildings and the village. It is located at 111C College Road, Sevenhill, tel: (08) 8843 4222.

The Sevenhill Cellar has an excellent and detailed website with information about all the wines they produce. Check out https://www.sevenhill.com.au. 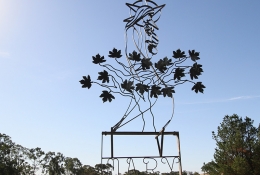 The Madonna of the Vines sculpture 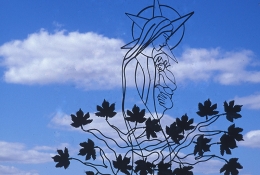 The sculpture of Madonna of the Vines 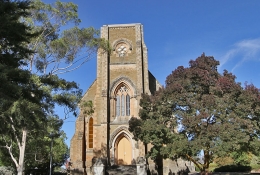 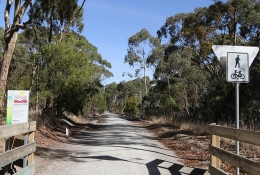 The Riesling Trail at Sevenhill