The Town of Murals.

Sheffield's proudly proclaims itself the Mural Capital of Australia. Inspired by Chemainus in Canada, which had bedecked itself with murals, the people of Sheffield decided to follow their lead. That was back in 1985 and the aim was to develop a significant tourist attraction which would be "an outdoor art gallery of heroic proportions, depicting the pioneering history of the district and its people". When I first visited in 1988 there were a small number of murals and all were done in a 19th century realism-romantic style. Today there are over 60 huge murals around town (expect to spend many hours if you want to see them all); there is a Mural Fest every year and that means that the winner is added to the collection. Some are inspired and genuinely artistic. Most are records of the history of the town and district. Murals are now the reason for visiting the town although there are a number of bushwalks and the Kentish district is particularly beautiful. Sheffield lies under Mount Roland; is surrounded by rolling hills and gentle valleys; and the district is known for its production of fat lambs, pigs, potatoes, timber and a number of vegetable crops.

Sheffield is located 29 km south of Devonport, 92 km west of Launceston and 272 km north-west of Hobart.

Sheffield was named by James Powlett who came from Sheffield in England. He built the first house in the district which he initially called the Kentish Inn but subsequently changed to the Sheffield Inn. When others moved into the area they adopted Sheffield as the name of the settlement. There is an alternative explanation that claims the town was named by Edward Curr, the manager of the Van Diemen's Land Company, who was also a native of Sheffield in England.

The Murals
The Sheffield murals are one of the great success stories of Tasmanian tourism. Started as a result of a public meeting in 1985, they were inspired by Chemainus in Canada which, confronted with a declining economic base, looked to murals as a way of attracting tourists. The project grew slowly but by the late 1980s it was attracting over 120,000 visitors and by 2012 it was estimated that over 220,000 people were coming to the town to see the murals which were being added to every year. The introduction of Mural Fest (an annual festival where nine artists are invited to paint murals around the town and one is acquired for permanent exhibition) ensures that a visitor can return every year and see new acquisitions. There is a handsome, illustrated booklet - Sheffield Town of Murals - which provides both a map and detailed descriptions of each of the murals. Its 6th Edition was published in 2009 and it needs to be constantly updated.

The book provides detailed descriptions of all the major murals. It also provides genuinely fascinating insights into the local community, its history and culture. A near-perfect example is the mural, The Missed Opportunity. Painted by Cheyne Purdue in 1990 and located on High Street it depicts a moment in the town's history when "In 1926 Jesse and Nellie Slater's old business friend, Mr Coles of Wilmot, came into the shop. He tried to persuade them to invest money in a new company, G.J. Coles P/L, which his sons were forming in Melbourne. The new concept was of open display shopping, with nothing selling for more than 2 shillings and sixpence. Mr & Mrs Slater couldn't be persuaded to invest. The success of G.J. Coles P/L is legendary  ... Slater's Country Store is still on the corner of Main and High Streets." The murals were a direct response to the town becoming run down after a boom period during the construction of Lake Barrington. It is claimed that the murals have given the town a sense of purpose and self-esteem. Certainly they have provided a visual insight into the history of the region.

Sheffield Heritage Museum
Located at 93 Main Street and also known as Kentish Museum, the Sheffield Museum is proudly local. As the website explains: "The Museum features items from ordinary life such as clothing, household appliances, farm equipment from the late 1800s and extraordinary items, such as wall phones. The first change-giving automatic petrol pump ever to be invented takes pride of place in the Kentish Museum because the inventor came from Sheffield." It is open on Monday - Friday 10.00 am - 12.00 pm & 1.00 pm - 3.00 pm. Check out http://www.sheffieldcradleinfo.com.au/accom_result1/kentish-museum/ or tel: (03) 6491 1861.

Redwater Creek Steam and Heritage Society
The Sheffield to Railton railway was opened on 6 November, 1914. Today there is one kilometre of track left and the Society operates steam train rides on the first weekend of every month from the original Sheffield railway station. The short journey is run on the Saturday and Sunday between 11.00 am - 4.00 pm. The train runs every half hour. The Society also celebrates steam power with the annual Steamfest which is held in March. For more information check out the Society's website at http://www.steamfesttasmania.org.au.

Lake Barrington, Devils Gate Dam and Lake Barrington State Recreation Area
Originally built in 1969 as part of Tasmania's hydro-electric power program (the lake was created when the 84 m Devils Gate Dam was constructed - it is one of the thinnest concrete arch dams in the world), Lake Barrington has an international-standard rowing course as well as excellent picnic and barbecue facilities and a 20 km-long stretch of water which is ideal for water skiing, canoeing and trout fishing. The Billet Creek Nature Way is a two-hour nature walk through the rainforest to a waterfall. There is a useful downloadable brochure - Parks and Places: Lake Barrington - published by Parks and Wildlife and downloadable at http://www.parks.tas.gov.au/file.aspx?id=6592.

Mount Roland
Mount Roland dominates the landscape to the south of Sheffield. It lies 8 km south of the town and rises to 1234 metres. There are a number of well marked bushwalks which are all suitable for a day of pleasant exercise - the Face Track is the more challenging and the other track from Gowrie Park Village takes from 4-6 hours.. There is an excellent website with lots of information about climbing the mountain. Check out Bushwalk Australia at http://bushwalk.com/forum/viewtopic.php?f=3&t=5070. There is also a good, detailed description at http://ajwatton.customer.netspace.net.au/29-Mt_Roland.html.

* The first explorers reached the area as early as 1823. Reports were not favourable with one explorer noting that the land was "mountainous, extremely barren and totally unfit for habitation".

* The area was explored by the surveyor Nathaniel Kentish in 1842. He was trying to find a route from Deloraine through to the north west coast.

* The area was subsequently opened up to settlement but it wasn't surveyed until 1859.

* By 1862 thirty lots of land had been sold and the settlement of Sheffield had been named.

* By 1865 the post office had changed its name from Kentisbury to Sheffield.

* The commencement of the Mersey-Forth Power Development Scheme in 1963 saw the town grow dramatically.

* The completion of the power scheme - seven dams and seven power stations - in 1973 saw the town's population decline.

* In 1985 it was decided to develop the town as a centre of murals.

* Today the town's economy is driven by tourism and it is a service centre for the surrounding farmland.

The town's official site - http://www.sheffieldcradleinfo.com.au/pages/sheffield - has information about the food and wine and accommodation in the area. There is also an excellent local website at http://sheffieldtasmania.com.au. 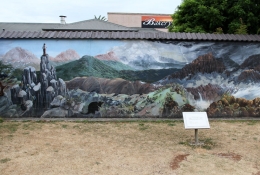 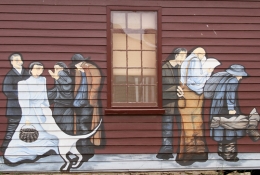 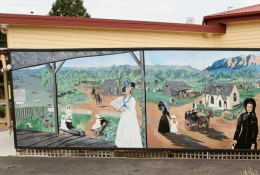 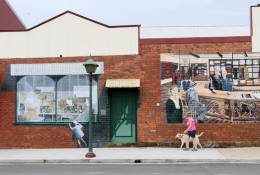 An illusion: a girl looks through the window of Frank Slater's Wireless Studio (1991) painted by John Lendis while a woman walks her Labrador in front of Missed Opportunity (1990) by Cheyne Purdue. 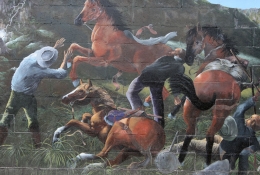 Spirited Horses by John Lendis (1987) in the Main Street. 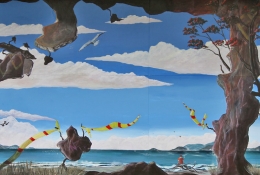 A recent painting from the Mural Fest with a level of surrealism. 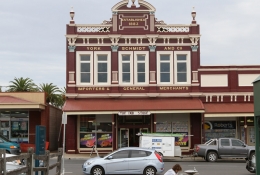 The impressive York Schmidt and Co (1883) in the main street. 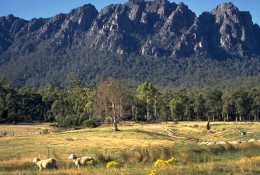