Over the past thirty years Shellharbour has changed from a quiet seaside village to a booming southern extremity of Greater Wollongong. The addition of two suburbs, Shellcove and Flinders, has seen the once-sleepy village grow to a point where it now is the southernmost part of the continuous urban development from Wollongong. With these changes have come a huge Workers Club and Shellharbour Square (not really part of the village) the largest shopping complex south of Wollongong. Most of the development of the area has been characterised by McMansions (large houses filling most of the block they are built on) and rapid development over previous farming lands. The town has changed but many of the attractions - the peaceful harbour, Bass Point and the famous surfing destination "The Farm" - have remained untouched.

Shellharbour is located 104 km south of Sydney via the Princes Highway, M1 (F6) and Five Islands Road through Port Kembla. It is 21 km south of Wollongong.

Here is another of those Australian self-evident names. It was noted by early Europeans that there were vast quantities of shells on the beaches in the area. From there it was only a small step to Shell Harbour and eventually, in 1885, to Shellharbour. In the meantime the Wentworth family had decided that the private town they had laid out should be called Peterborough but the locals successfully resisted.

The Harbour
Not surprisingly, given its name, the centre of Shellharbour is the charming, timeless harbour with its narrow beach, bobbing boats, parklands, childrens park and promenade. It is edged by handsome, mature Norfolk pines that were planted in 1895 as part of a local beautification project designed to attract holidaymakers. The rock pool was built at the same time. So strong are the local connections with the original  Wodi Wodi people that Bassett Park, which lies to the south of the harbour, occupies the site of an Aboriginal midden. The sea was obviously rich with crustaceans and fish and the people camped near the beach.

Fishing in the area
The larger Shellharbour area (which takes in Lake Illawarra and the Tasman Sea off the coast) is popular with anglers because of the rich variety of fish that can be caught from boats offshore, from the local beaches, from the estuary at the mouth of Lake Illawarra, from the lake itself and from the foreshores of the harbour. This is an area known for its mackeral, tailor, snapper, trevally, jewfish, kingfish, tuna bream, blackfish and flathead.

Only a few kilometres north of Shellharbour is the mouth of Lake Illawarra, a shallow lake which covers 33 sq. km. Anglers seem to love to throw a line in off the Windang Bridge and in summer hundreds of people catch prawns in the estuary.

Bass Point Reserve
The Wodi Wodi people were at Bass Point 17,000 years ago when the sea level was so low that it was 14 km inland. It wasn't until 6,000 years ago that the sea rose to its current level and it was around that time that the Wodi Wodi settled beside the sea so they could catch fish and live off the shellfish they found on the rocks. There area is rich in ancient Wodi Wodi artefacts with shell and stone objects, including one of the most ancient edge-ground axes outside of tropical Australia, being found. There are a number of middens in the area.  Bass Point is a rare example of a Pleistocene era site in south-eastern Australia.

Today Bass Point Reserve, which is named after George Bass who, with Matthew Flinders, was the first European in the area, is a popular destination for anyone wanting to have a picnic, fish, snorkel, surf, scuba dive or bushwalk. Bushwalking around the shores is particularly popular with the north-eastern tip of the headland around Boston Point being popular. There is also an unusual memorial to four Australian soldiers who died in 1943 while helping to rescue the crew of an American tanker, the Cities Service Boston, which hit an offshore reef and was driven onto the rocks of Bass Point.

There is also a Bass Point Indigenous Cultural Walk which "consists of a series of interpretative signs that provide information about indigenous occupation of Bass Point and Shellharbour City. The Walk tells a story of the way indigenous people connected with the land, movement patterns, diet, resources and tools."

Killalea State Recreation Area
There are a number of legendary surfing locations along the New South Wales coast: The Farm at Killalea State Recreation Area is one of them. Named after Edward Killalea it draws surfers to both 'Mystics Beach' and 'The Farm'. Non-surfers are attracted by the beauty of the area, the excellent picnic facilities and the opportunities for scuba diving, snorkelling, fishing and walking.

Blackbutt Forest Reserve
Located off Shellharbour Road north of the township is the Blackbutt Forest Reserve, 100 ha of coastal forest and parklands with walking tracks and family picnic areas. It is the largest natural woodland reserve in the Illawarra and the last remaining remnant of coastal plain forest in the Illawarra. A number of walking paths pass through a diversity of vegetation zones including areas of rainforest, wet schlerophyll forest and red gum woodland where there are stands of melaleuca, blackbutt, stringy bark and grey box as they existed before the land was cleared in the 1820s. A 400-seat open-air amphitheatre depicts Australian flora and fauna.

The Illawarra Light Railway Museum
The Illawarra Railway Museum is located at Albion Park on Tongarra Road which runs between the Princes Highway and the Illawarra Highway. Their collection includes two Queensland sugar trains dating from 1939, one of which had been originally owned by CSR; a coal train donated by AIS Port Kembla; an American steam train built in 1917 and used to haul blue metal in Kiama; and a range of diesel engines.

The museum regularly opens to the public with train rides on the Second Sunday of each month, from 11.00 am to 4.00 pm. They also operate on the fourth Sunday in January, Easter Sunday and the Sunday of the June (Queen's Birthday) and October (Labour Day) long weekends. Steam locomotives operate on the monthly running day but may be replaced by a diesel locomotive due to a total fire ban or other operational requirement such as volunteer availability. Check out http://www.ilrms.com.au/ for details of opening times and special days.

* On 26 April, 1770 Captain James Cook recorded observing "smoke on the shore before dark". Many local Aborigines believe that this is a reference to their ancestors fires on Bass Point.

* The first Europeans in the area were explorers George Bass and Matthew Flinders in March, 1796. It was somewhere south of Port Kembla, possibly as far as Shellharbour, that one of the most famous incidents of their journey in the Tom Thumb occurred. As Flinders recalled: "We had clipped the hair and beards of the two Botany Bay natives at Red Point and they were showing themselves to the others and persuading them to follow their example. Whilst therefore the powder was drying, I began with a large pair of scissors to execute my new office upon the eldest of four or five chins presented to me, and as great nicety was not required, the shaving of a dozen of them did not occupy me long. Some of the more timid were alarmed at a formidable instrument coming so near to their noses, and would scarcely be persuaded by their shaven friends to allow the operation to be finished. But when their chins were held up a second time, their fear of the instrument, the wild stare of their eyes, and the smile which they forced, formed a compound upon the rough savage countenance not unworthy the pencil of a Hogarth. I was almost tempted to try what effect a little snip would produce; but our situation was too critical to admit of such experiments."

* As early as 1803 a certain Captain Isaac Nicholls, trying to stave off starvation in Sydney because of a drought, shipped cattle into the fertile plains behind Shellharbour.

* In 1812 the explorer George Evans camped at Barrack Point while en route to Appin. * In 1816 Governor Macquarie requested that his surveyor general, John Oxley establish free land grants and this resulted in, the land around Shellharbour being divided into 22 free grants with the first grant of 700 acres being issued to Andrew Allan on land now occupied by the Albion Park airport. Allan called his property Waterloo.

* Cedar cutting had existed in the area since around 1812. The challenge was to get the cedar to Sydney and in the early days the logs were simply floated offshore to waiting ships. By the 1820s Shellharbour had become a port and the cedar was being brought to the port and loaded onto waiting ships.

* By 1828 most of the land south of Lake Illawarra was owned by D'Arcy Wentworth, who had 14,050 acres (5,686 ha) on which he was grazing 1600 cattle. It was Wentworth who, in 1851, established a private township which he named Peterborough. This was officially changed to Shellharbour in 1885.

* The town evolved over the next two decades with stores appearing in the 1850s, a stone watch-house being built in 1861 and a courthouse and gaol in 1877.

* In 1868 gold was found at Bass Point by Thomas Reddall and Edward Killalea.

* In 1880 mining and shipping blue metal began from the Bass Point Quarry. This continues today.

The Shellharbour Council has a useful website with a history of the local area. Check out http://www.shellharbour.nsw.gov.au/  and http://visitshellharbour.com.au/ has extensive accommodation and eating options. 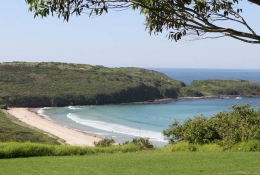 The Farm - a popular beach for discriminating surfers. 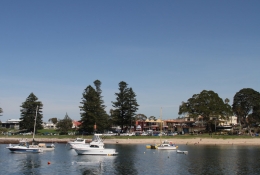 Shellharbour's harbour and beach in 2013 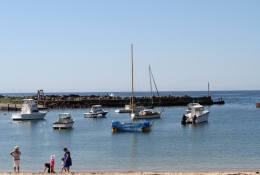 The harbour, the breakwater and the beach in 2013 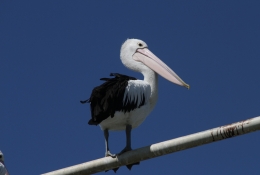 The harbour is a magnet for pelicans.