Retirement and holiday village at the mouth of the Shoalhaven River.

Shoalhaven Heads is located 146 km south of Sydney via the Princes Highway. Turnoff at Gerringong and follow the coast road on Seven Mile Beach until you see the signs to Shoalhaven Heads.

Shoalhaven Heads Native Botanic Garden
Located in Celia Parade is the outstanding and very special Shoalhaven Heads Native Botanic Gardens. They are run by volunteers and are rich in native Australian flora. The excellent website (see https://www.shoalhaven.com/products/shoalhaven-heads-native-botanic-garden) notes that the gardens contain "A collection of over 200 native plants and trees from all over Australia including Far North Queensland and Western Australia including many bush-tucker plants. All plants are identified ... The eastern section of the garden contains a wide selection of plants from Western Australia. Open from sunrise to sunset daily - free of charge. Picnic area and toilets on site." It is small and easily accessible and the signage on the plants is detailed and informative. Dogs on leads are permitted. For more information tel: 0429 012 796.

Bird watching in the estuary waters of the Shoalhaven River
At the eastern end of River Road there is a small park with adequate parking which is an ideal starting point for bushwalks across to the southern end of Seven Mile Beach and for watching the rich diversity of birds which use the quiet waters of the Shoalhaven River as an "International and Domestic Airport" as the amusing and informative plaques along the foreshore explain. "This estuary may not look like your average airport," explains the sign beside the toilet block, "but thousands of shorebirds arrive and depart from this area every day. Some birds are locals, while others come from as far away as Siberia." In fact the list is remarkable and includes the double-banded plover from New Zealand, the Caspian tern and Pacific gull from the Southern Ocean, he eastern curlew from China and Siberia, the bar-tailed godwit from Alaska and Siberia and a range of birds which have flown from the northern hemisphere including the Mongolian plover and the red-necked stint.

Safe Surfing
Clearly signposted off McIntosh Street is the Shoalhaven Heads SLSC with good parking and an excellent stretch of Seven Mile Beach for boards and bodysurfers.

Walking on Seven Mile Beach
If you enjoy walking along a seemingly endless beach then you can walk the seven miles (actually it is probably closer to eight miles - 13 km) from Shoalhaven Heads to Gerroa but the walk is easy and pleasant and the beach is edged by the Seven Mile Beach National Park. There is also a popular Sand Track Walk behind the beach. For more information check out http://www.nationalparks.nsw.gov.au/seven-mile-beach-national-park.

* For thousands of years prior to the arrival of Europeans the Tharawal people occupied the area.

* The first Europeans into the area were the survivors of the wreck of the Sydney Cove who walked up the coast to Sydney. In the wake of their journey George Bass, the famous explorer, made his way down the coast in 1797. He named Shoals Haven.

* Lieutenant Kent and assistant surveyor-general James Meehan surveyed and mapped the area in 1805. At the time the area was characterised by verdant rainforest.

* In 1812 George Evans travelled up the coast from Jervis Bay to the Shoalhaven River. He crossed the river in a bark canoe and continued up the coast and up the Illawarra escarpment to Appin.

* In 1818 the explorers Charles Throsby, Hamilton Hume and James Meehan were given the challenge of finding a route from the Southern Highlands to Jervis Bay. With assistance from local Aborigines they descended into the Kangaroo Valley, crossed the Shoalhaven River and successfully reached Jervis Bay.

* For 100 years from the 1830s to the 1930s the area that is now Shoalhaven Heads was nothing more than a few fishermen's huts on the shores of the Shoalhaven River.

The most interesting accommodation in the area is the historic Coolangatta Estate. Check out http://www.coolangattaestate.com.au for details. Beyond that Shoalhaven Heads has a number of caravan and tourist parks with cabin accommodation and caravan sites.

The best eating in the area is at Coolangatta Estate and in nearby Berry at the Berry Sourdough Bakery and Cafe, the Hungry Duck and The Pavilion. The town has a large club, the Shoalhaven Heads Bowling and Recreation Club, which serves food as well the town has a pizza restaurant and a takeaway. 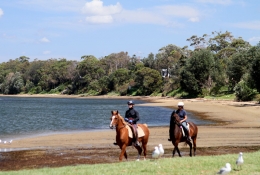 Horse riding along the shoreline at Shoalhaven Heads. 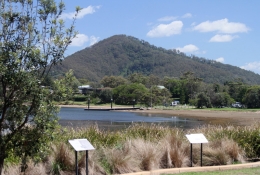 Coolangatta Mountain behind Shoalhaven Heads and signage for twitchers along the banks of the Shoalhaven River. 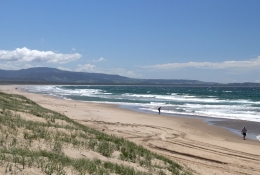