Mainland port for cruising around the Whitsunday Islands.

Shute Harbour is located 11 km from Airlie Beach on a winding road through the Conway National Park. It is little more than a camping and picnic area which car parks and a harbour where the cruises and the ferries leave for the Whitsunday Islands. There is a claim that Shute Harbour is the second busiest harbour (mind you, for small vessels only) in Australia. Another claim, which suggests the scale of tourist operations in the Whitsundays and the lack of airstrips, is that it is now the largest seaplane airbase in the southern hemisphere. While there is a small community beyond the harbour, it is primarily a harbour, car park, slipway and transfer area.

Shute Harbour is located 1,115 km north of Brisbane and 11 km from Airlie Beach on a short winding road through the Conway National Park.

Shute Island, just off the coast from Shute Harbour, was named by Captain J. F. L. P. Maclear, RN who surveyed the area in the HMS Alert around May 1881. It is believed that one of the crew on HMS Alert was named Shute although there is no firm evidence that was the case.

Lions Lookout
Located above the main harbour (access via Whitsunday Drive) is Lions Lookout which has panoramic views over the harbour towards Repair Island, Tancred Island and Shute Island, all of which lie just off the harbour.

Cruises
There are a range of cruises around the Whitsundays including day and half day cruises to Whitehaven Beach (with stops at Daydream Island and Hamilton Island) and full day Great Barrier Reef Adventures offered by cruise operators at Shute Harbour. The main operators are FantaSea Cruises (https://www.fantasea.com.au) and there is a useful generic site which covers many of the operators. Check out http://www.whitsundays.com.au/cruises-and-sailing.

Conway National Park
To the south of Shute Harbour lies the Conway National Park. It can be accessed by following Shute Harbour Road to the park's day use area and from Whitsunday Drive which heads north from Shute Harbour. The park has a number of walking tracks which take the visitor through a variety of vegetation types including lowland rainforest, mangroves and open forest. Take the Mt Rooper track for spectacular Whitsunday Passage and island views. You can access the Swamp Bay camping area on foot or by boat.
The Queensland National Parks website describes the area as "This park includes the rainforest-clad Conway Peninsula and protects the largest area of lowland tropical rainforest in Queensland outside Tropical North Queensland. Hoop pines grow on coastal ridges and in damp gullies, emerging above the rainforest canopy. Rugged, steep, rocky cliffs provide a spectacular 35 km-long backdrop to the Whitsunday Passage and islands. Dry vine thicket, mangroves, open forests with a grasstree understorey, paperbark and pandanus woodlands, and patches of lowland rainforest with twisted vines grow in the park. It is home to two of Australia's mound-building birds, the Australian brush-turkey and the orange-footed scrubfowl. Rising steeply behind busy coastal settlements, the Conway Range appears impenetrable. Through climate fluctuations over tens of thousands of years, the rainforest has persisted here, providing a continuous refuge for wildlife.
"The park's vegetation is very similar to that on the Whitsunday islands because thousands of years ago the sea level rose, drowning coastal valleys and creating the islands. For thousands of years, the Ngaro and Gia people roamed these forests, harvesting riches of the land and the adjoining sea country. Today the adjacent waters are protected in marine parks."

There are a total of eight walks in the National Park.

* Prior to the arrival of Europeans the area was occupied by members of the Darumbal Aboriginal language group.

* In 1770 Captain Cook sailed up the coast and named Cape Conway.

* The area was surveyed by Captain J.F.L.P. Maclear in the HMS Alert in May 1881. He named the island off the coast Shute Island.

* In 1904 an early settler, Thomas Abell, took up land at Airlie Beach to grow vegetables and fruit.

* In 1932 the waters north of the harbour were named Shute Bay.

* In 1935 the Queensland Lands Department offered land beside the beach for sale. It was named Airlie Beach which was probably a reference to Abell's home in Scotland.

* In 1959 Shute Harbour became the main mainland tourist terminal for the Whitsundays.

* In 1960 the tiny settlement was officially named the Town of Shutehaven.

* In 1985 Prosperine Council agreed to rename the location Shute Harbour.

There is a useful, official website. Check out http://www.tourismwhitsundays.com.au/regions/shute-harbour. 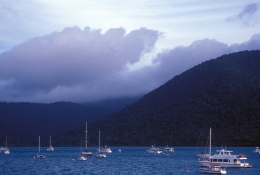 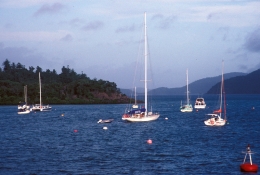 The view from the wharf at Shute Harbour, Whitsunday Islands (1993)