Small town on the banks of the Tamar River.

Sidmouth is a small township which lies just beyond the western end of the Batman Bridge. It would normally not rate a mention but it does have two remarkable attractions - a church, called the Auld Kirk, which was built by convicts and which still stands on the banks of the Tamar and a very unusual lighthouse which is a reminder of the dangers shipping experienced as it traversed the Tamar River.

Sidmouth is located 37 km north-west of Launceston via the West Tamar Highway.

The town was probably named after Sidmouth, a town on the coast in Devon, England. It makes sense as the Tamar River was named after the River Tamar which forms part of the border between Devon and Cornwall.

Auld Kirk
The prime reason for visiting Sidmouth is the Auld Kirk (travel west across the Batman Bridge and follow the signs) a Presbyterian church which was built of stone rubble by convict and free labour in 1845-6. It was built after requests had been made from the local citizens who were helped by the first clergyman, Rev. Alexander McKenzie, who arrived in the area in 1843. McKenzie departed for Scotland in 1845 and so the first service held in the church was by the Reverend James Garrett who had arrived in the parish in July, 1846. The church was built in a simple Regency Gothic Revival style with stone rubble walls, lancet windows and sandstone dressing around the windows. It sits on the bank above the Tamar River with views across the river. The church was gutted by fire on 6 September, 1900 and remained a ruin (complete with wattle trees growing out of it) until it was restored and reopened in 1913. It has had a chequered history - closing in 1920, opening again in 1933 and today being serviced by a pastor who covers a large area of northern Tasmania. For more detail check out http://ausmed.arts.uwa.edu.au/items/show/1057 and http://westtamarpresbyterianchurch.org.au

The Auld Kirk Lighthouse
It seems the origin of this unusual lighthouse were in the "good works" of the Presbyterian minister at the Aulk Kirk. In 1932 the Hobart Mercury wrote of the problems of navigation in the Tamar Valley: "In 1833 the first lighthouse was erected at Low Head. For 30 years after the only other night assistance to mariners on the Tamar River seemed to have been at Sidmouth, 10 miles away, where a Presbyterian minister kept burning a light in a front window of his cottage." Today it is little more than a corrugated iron shed and is not listed in the standard works on lighthouses in Australia.

The Batman Bridge
Prior to the construction of the Batman Bridge, people in George Town wanting to cross the Tamar River either had to make the journey by boat or drive to Launceston and back up the riverside - a distance of 92 km from George Town to Beaconsfield. Since 1966 when the Batman Bridge was opened the distance has been reduced to 35 km. The bridge presented numerous engineering challenges which are explained in an article Novel Features in Tasmania's Batman Bridge which was published in 1966: "The reason for the bridges peculiar looks is the geological conditions of the site where the bridge is situated. The western bank of the bridge has good rock structure (Jurassic dolerite) as foundation while the eastern bank has deep clay lying under the structure. It was therefore decided to build a cable stayed bridge with a leaning 97.6m “A” frame tower founded on the western bank to help support the four spans over poor foundation material." The bridge's total length is 427 m and its deck width is 10.3 m. There is more detail at http://web.archive.org/web/20040706145302/http://www.transtasmanbridges.com/cablestayed/batman.html

* In 1804 William Collins and Lieutenant Colonel Paterson explored the Tamar River to the Cataract Gorge where Launceston now stands.

* By April, 1805 the first settlers were occupying land along the shores of the Tamar.

* By the 1840s the Scottish settlers around Sidmouth were lobbying the government to build a Presbyterian church.

* In 1846 the Auld Kirk was consecrated. The Presbyterian clergyman, Alexander McKenzie, had arrived three years earlier but the first service was held by Reverend James Garrett

There is an unusual website - http://www.artentwine.com/#!sidmouth-community-hall/c8um - which covers the local community in terms of art, entertainment and wine. 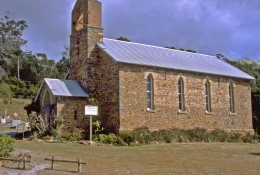 The Auld Kirk, built by convicts and free labour between 1845-46. 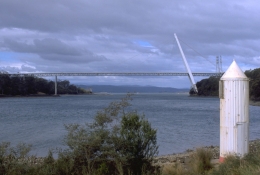 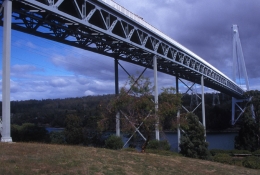