Historic one pub mining town on the edge of the desert west of Broken Hill.

If it wasn't for the small community of artists, its desirability as a setting for outback movies, and the seemingly never ending tourist trade, Silverton would be a ghost town. Located west of Broken Hill and close to the South Australian border this once-thriving mining town (at one point it had a population of 3,000) is now nothing more than a few historic buildings, the remnants of once-vibrant streets, several art galleries and a pub. No visit to the town is complete without travelling a few kilometres to the Mundi Mundi Lookout and gazing to the horizon over barren desert, having a drink at the Silverton pub and visiting Day Dream Mine, the last mine that is still open for inspection.

When, in 1883, the tiny mining settlement of Umberumberka moved 2 km south-west to a place where there was a store and hotel the locals decided to give it a "bleeding obvious" name and so the new silver mining town simply became Silverton.

There is a useful brochure - Welcome to Historic Silverton - which lists 21 things to see in the Silverton area. Pick up a copy and follow it around the town. Check out https://www.silverton.org.au/experience/attractions/ for details of all the main attractions. Of particular interest (this is not comprehensive - it is a guide to the most interesting places) are:

Silverton Public School and Museum
The Silverton Public School, which started life as a tent in 1884, evolved into a tin shack in 1887, and finally became this simple building in 1888 served the local community until it was finally closed in 1970. Its most famous teacher was Mary Jane Cameron, an Assistant Teacher from 1887-1889 who became the famous Australian poet, Dame Mary Gilmore. It is now a museum which, through photographs and artefacts, tells the story of the district and of education in outback Australia. There is a fully maintained early 20th century classroom complete with educational equipment and resources. Visiting school groups can have a lesson taught as it would have been in the early 20th century. It is open Tuesday and Thursday from 9.30 am - 3.30 pm.

Masonic Lodge
The first Freemason in town was Charles Rasp, the man widely credited with discovering Broken Hill's mineral potential. He put up the money to build this simple building which was completed in 1885 and dedicated in 1886.

The Methodist Church
There is something delightful, and wonderfully Scottish, about the history of Silverton's Methodist Church. The original Methodist church was destroyed by strong winds in 1891. The Scottish Presbyterians, being pragmatic and frugal, sold their church to the Methodists. The argument was that the Presbyterian congregation was declining and the Wesleyans (large numbers of Cornish and Welsh had arrived in Silverton from the copper mines in South Australia) were on the increase. Amusingly the Presbyterian minister, no longer having a church, took up mining.

Silverton Hotel
There was a time when the Silverton Hotel used to have a token white horse outside to enhance photographs and attract tourists. Then came the movie boom spearheaded by Wake in Fright in the 1970. The pub, apart from being a watering hole for the film crews, became a popular film location and the Mad Max 2 car replaced the horse. It has been used in films as diverse as Wake in Fright, Mad Max 2, A Town Like Alice, Hostage, Razorback, Journey into Darkness, Dirty Deeds, The Craic and Golden Soak. The original town pub was opened in 1884. It burnt down in 1918 and was replaced by the current building which previously housed the town's postal service. It is a pub with character and a wry sense of humour typical of outback Australia.

Mad Max Museum
It was an obvious addition to the town: a museum celebrating Mad Max 2 which was filmed around Silverton. The museum has some of the vehicles used in the movie, extensive collections of local Mad Max related memorabilia and life size models in full costume. It is open from 10.00 am - 4.00 pm, tel: (08) 8088 6128. Check out https://www.silverton.org.au/experience/attractions/mad-max-museum/ for more details.

Silverton Gaol Museum
Silverton's original gaol was a timber and iron building. By 1888 it was regarded as totally inadequate and unfit even for prisoners. In fact, when the Chief Justice of New South Wales, Sir Frederick Darley, visited the town that year he found 22 men crammed into four small cells and secured at night in leg irons, regardless of whether or not they had been tried. When the gaol overflowed they were chained to peppercorn trees outside.
The year before Darley's arrival the Town and Country Journal had recorded: "The scum of the country began to be attracted to the new and prosperous field like blowflies to a carcase (sic). Horse-stealers, cattle duffers, mining sharks and rogues of all descriptions rolled up ...Robberies, and the jumping of claims and allotments, were things of daily occurrence. It was nothing unusual to see from ten to twenty culprits chained together to a tree at the rear of the police camp - some of the more refractory members having bells fixed on to their backs so that, should they attempt to get away, the police would be warned."
The present building was erected in 1889. It became an overnight lock-up in 1892, a boys' reformatory in the 1930s and was closed in 1943. It was restored by the local historical society and reopened as a museum in the 1960s. Open daily from 9.30 am to 4.30 pm it displays historic memorabilia including such fascinating items as a bill of sale in which the foolish James Poole exchanged his share in the Broken Hill mine for ten steers (that was before the mine started delivering huge dividends) and a bath which was used to preserve bodies until the coroner arrived from Sydney. Over the road from the gaol is the old courthouse (1889) which is now used as the War Memorial Youth Camp.

Scenic Lookout at Mundi Mundi
There is nothing quite like standing on a hill and gazing to the horizon over absolutely barren desert wasteland. It is a reminder of how vast and isolated so much of central Australia is. If you drive west from Silverton for about 5 km you will see a sign "Mundi Mundi Lookout 400m on right" and from this vantage point you can look down and across the Mundi Mundi Plains. The setting was made internationally famous when it appeared in Mad Max 2.

Umberumberka Reservoir
Umberumberka Reservoir is located 9 km west of Silverton. It was completed in 1915, upgraded in 1920 and replaced in 1960 by a new pumping station which is on display every day except public holidays from 8.30 am to 3.30 pm. Today the reservoir is a standby facility supplementing Broken Hill's main water supply.

Penrose Park
Penrose Park, a 20 ha recreation area was established in 1937 for the local miners and their families. It has picnic facilities, wood and gas barbecues, caravan and camping sites with amenities, a large hall for hire with power, kitchen facilities and bunkhouses, tel: (08) 8088 5307.

Day Dream Mine
With tours of the mines closing in Broken Hill, the only mine in the area where visitors can experience a genuine "mining experience" is the old Day Dream Mine site which is located on the Broken Hill road. The Day Dream Mine opened in 1883 and a settlement of 400 to 500 grew up around it. In 1885 the first smelters in the district were established. They closed the following year although mining at Day Dream continued until 1983. Apart from entering an old mine (be sure to wear sensible shoes) the area still has the detritus of its mining heyday with bits of machinery, boilers and other mining equipment littering the site. There are regular conducted tours. You can either make a booking at the Broken Hill Visitors' Centre or turn up any time between 10.00 am and 3.30 p.m. seven days a week. For more information tel: (08) 8088 5682. Check out https://daydreammine.com.au/ for more details.

* Prior to the arrival of Europeans the Wiljali First Nation people moved through the area. They were desert people and depended on the district's unreliable water supplies. More recently the Paarkinji (sometimes written Barkinji) have moved into the area from the lower Darling.

* By the 1860s graziers and pastoralists had arrived. The land around the Darling River had all been taken up and the new arrivals were trying to eke a living out of much poorer land. Goods were shipped up the Darling by river steamer and then hauled overland to Silverton by bullock teams.

* Prospectors arrived in the area in 1867 after a local station hand claimed to have discovered gold. He was not telling the truth.

* In 1875, while digging a well on Thackaringa station south of present-day Silverton, two men hit a lode of silver. Patrick Green, a storekeeper at Menindee, staked out a claim and named it the Pioneer mine. Nothing came of the discovery and the sample was lost when it was sent to England for assessment.

* Finally in 1880 it was recognised that there were rich deposits of silver in the area and 300 miners flooded into the district.

* Silverton was surveyed in 1883. In September that year the population was 250. By December it had doubled. That year the Day Dream Mine opened and attracted an additional population of 400-500.

* By 1885-86 the town's population had reached 3,000. Silverton was proclaimed a township in 1885 and a municipality the following year. In 1885 a short-lived smelter was established at Day Dream Mine. It only lasted a year.

* In 1887 the famous Australian poet, Mary Gilmore, arrived in the town to work as an Assistant Teacher. Some of her early poems were published in the Silver Age.

* In 1892 the Umberumberka mine closed. It was followed by Day Dream. The Thackaringa mine closed in 1897.

* By 1901, after miners had moved to the richer fields at Broken Hill, the town went into decline, houses were moved and only 286 people remained.

* Today the town has a population of around 50 most of whom work in tourism.

An opportunity to stay in the area and experience a "true outback experience" ranging from walking, driving 4WD vehicles, feeding domestic animals and wild birds can be had at Eldee Station. For more information check out http://www.eldeestation.com.

There is a useful local website - http://www.silverton.org.au - which provides detailed information about the town. Also check out https://www.visitnsw.com/destinations/outback-nsw/broken-hill-area/silverton. 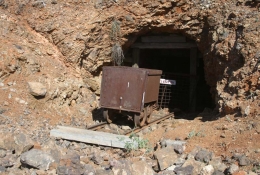 Remnants of mining at Day Dream Mine. 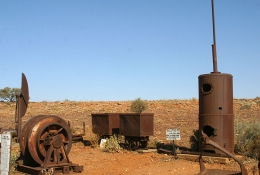 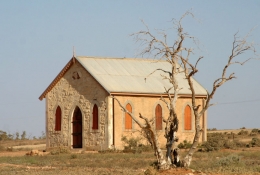 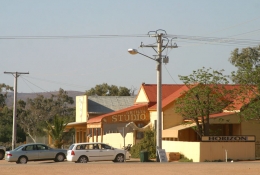 The Horizon Gallery, one of Silverton's many galleries. 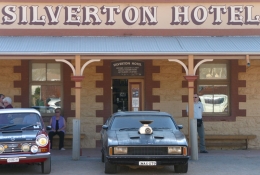 The Mad Max car outside the Silverton Hotel. 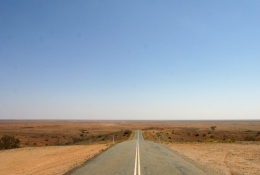 From the Mundi Mundi Lookout the road stretches forever into the desert. 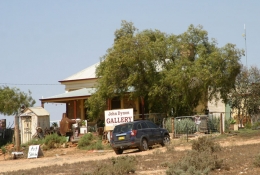 The John Dynon Gallery - one of a number of art galleries at Silverton. 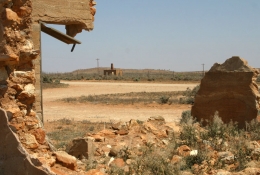 Ruins litter the landscape where Silverton township once stood.